(This story contains major Season 2 spoilers for “The Boys.”)

Amazon’s “The Boys” pushed the envelope on superhero conventions in its first season merely by having the presence of a rogue group willing to call out the hypocrisy and self-serving nature of the caped crusaders who would usually be who the audience roots for. But the visual effects of the series frequently upped the ante on genre conventions for the second season. (When was the last time you saw an exploded heads or whale guts in a Marvel movie? Or two amorous superpowers getting it on in mid-air?)

And much to the delight of the effects team, the show was able to submit to the Emmy not just for one episode, but for the entire eight-episode season. “We do a lot of great work, but it is peppered throughout the whole season. So, by having this season entry, I think it changed the game for us. All of a sudden, I was like, ‘Oh, we can submit everything!’” says visual effects supervisor Stephan Fleet, who has worked on the Emmy-nominated series since Day 1.

Fleet employs a trusty system to inform the visual effects of the series to avoid cliches that often go with this genre. “I’m going to get like a little bit dorky theater major here, but I actually look at this in a very Aristotelian Poetics way that I’ve studied my entire life,” Fleet says. “He ranks the most important things in performance: plot, character, thought, melody, spectacle, diction, technical, which I would put a lot of visual effects on. 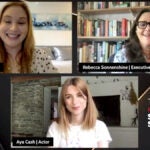 “But I always circle back to everything serving a character in the story in the action, and we always work backwards from there. So even if you look at something like the whale scene, or the head explosion scenes, there’s a purpose.”

Or take the subject of desire, usually non-present in the film and TV depictions of superheroes, in scenes as eyebrow-raising as rascally Homelander’s (Antony Starr) airborne coitus with love/hate adversary Stormfront (Aya Cash) which involved some creative bottom-half CGI to keep a visual flow or even Homelander’s lingerie-clad, very steamy seduction of…himself.

“If you go back to Greek mythology, there’s a lot of weird sex stuff so it was fun,” says Fleet, noting that a lot of tricky planning went into making these sequence work. “Those are two of my other favorite scenes, but in television you’re always thinking about time and precision and the Homelander doppelganger character morphing is one of the hardest things I’ve had to tackle on the show, it’s very difficult to make it look real. We did a couple of interesting techniques where we overlapped the shadow from him blocking the light onto his face, and we were able to have them touch each other by splitting color and not actually split the screen. But ultimately, an incredibly rewarding day because Anthony Starr is amazing.” 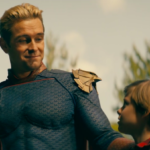 And even in the climactic scenes of steadily revealed villain Stormfront getting her cape absolutely clocked by Starlight (Erin Moriarty), Maeve (Dominique McElligott) and their brood, Fleet and creator Eric Kripke wanted some twists on convention. Fleet credits the use of grayscreen versus often-overutilized greenscreen for the impressive renderings of actress Aya Cash’s severed limbs in the penultimate moments.

“One of the coolest things we did out there was a real explosion, with no visual effects augmentation whatsoever,” says Fleet, who says well under 2.000 VFX shots are present in the season, an amazing statistic given the genre “The Boys” takes space in. “It’s always fun on the show that we get to do big things like that for real in this day and age. And then Eric wanted a girlfight that could be this very real, grounded, violent thing where it basically becomes just a brawl, they’re hitting each other too much to be able to really get into using their powers to beat the living s— out of a Nazi.”

Fleet promises a “bigger” Season 3 but will stay true to the story and character-dictated visual guidelines set by the creators of this series. “We’re able to take things to a slightly heightened level of reality and absurdity,” Fleet says. “But it always still works and feels like part of our world. People are smart enough now to cut through the eye candy. They still want something that connects with them like on a soul level, right? That’s what the real gold is.”

“The Boys” is available to stream on Amazon Prime Video.