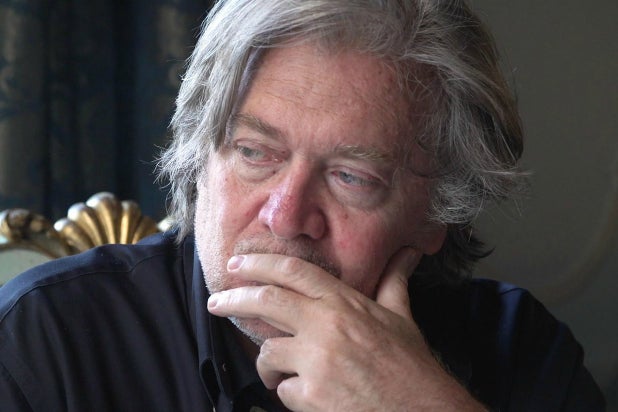 Given his skill at manipulating the press, it’s totally understandable why Steve Bannon would agree to or even embrace being the subject of not just one but multiple documentaries. But where Errol Morris’ 2018 film “American Dharma” aimed to interrogate and deconstruct Bannon’s poisonous philosophies head on, “The Brink” embeds filmmaker Alison Klayman (“Ai Weiwei: Never Sorry”) in his daily life for months on end, observing his methods, and eventually, exposing the efficacy of tactics that have rhetorical foundations built on quicksand.

Following Bannon as he drifts both politically and professionally from the good graces of “reputable” Republicans while positing himself as a proponent and prognosticator of their increasingly divisive values, Klayman’s film showcases the qualities that make Stephen Bannon such an effective political strategist even as it suggests that its success is as likely to eat his own future alive as the future of democracy itself.

For example, he has just enough sociopathic intellect to, in the film’s opening scene, admire the architectural perfection of Auschwitz, and later, promoting his own documentary “Trump @ War,” not only joke, “I always ask, ‘What would Leni Riefenstahl do?'” but also sincerely suggest that he believes that propaganda, which he admits his film is, is by definition “good.”

Picking up in the months after he helped Trump win the White House, Bannon became the president’s fall guy for the violence that erupted during the “Unite the Right” march in Charlottesville, Virginia, after allegedly being the architect of his “both sides” comments. Unshackled by the veneer of propriety he was forced to maintain as a presidential staff member, Bannon re-entered politics as an advocate for Republican candidates who were considered insufficiently supportive of Trump’s policies.

But the stinging defeat of many of those candidates — including Alabama senatorial candidate Roy Moore, whom he vocally endorsed despite numerous credible accusations of sexual misconduct — puts him on the outs with the higher-ups at the GOP, who question his judgment and see him as a liability. Consequently, Bannon turns to Europe, where he establishes a network of right-wing leaders across the continent who are only too eager for him to help plan their takeover and dismantling of their respective governments.

Under the guise of holding informal dinners with extremist leaders and re-branding right-wing and anti-Semitic language as “economic nationalism,” Bannon traverses Europe with a small team of supporters, while fielding interview requests, making public appearances, and hosting events designed to shore up the support of policies that seem transparently divisive. But even as he bends the ear of high-profile politicians like Nigel Farage and holds court with donors and supporters from the likes of financial superpowers like Goldman Sachs, Bannon’s tactics threaten to alienate him from friends and former allies who grow less and less sure how much of what he says is just talk and how much he actually believes — and regardless which it is, worry how much it could harm them professionally or politically.

Shrewdly avoiding a biographical exploration of Bannon, Klayman and her producer, Marie Therese Guirgis (“On Her Shoulders”), become flies on the wall during his daily post-White House life, exposing his intellect and personality in ways both humanizing and alarming. Demanding, charismatic and unflappable, Bannon disarms his opponents with a measured combination of affability and maddening obstinacy, persisting in his use of dog-whistle language and policymaking that he unbelievably claims not to know is transparently racist, even when intrepid reporters like The Guardian’s Paul Lewis point out its evident, historic associations.

From Klayman herself to the myriad journalists he sits with over the course of promoting “the Movement,” his name for the alt-right supergroup forming in Europe, Bannon is repeatedly challenged about using fascist, anti-Semitic rhetoric; his ability to deflect, and to insist he is unaware of the dual or “true” meaning of that language, would almost be admirable if its effects weren’t so dangerous.

But what these filmmakers do particularly effectively is to highlight how that tactic works in a room of indoctrinated (or in many cases uneducated) acolytes, but in a broader context — and under the scrutiny of investigative journalists — it has made him increasingly radioactive to people would have happily used him just months or years earlier. Bannon can charm an audience at a Canadian symposium even as they groan at his fact-deficient, plainly inaccurate claims, but when it comes to being an advocate and policymaker, his circle of confidantes and his influence both continue to shrink. From Trump to Breitbart to the “axis” of countries rejecting his initiatives, Bannon is less relevant than ever, even if his playbook has metastasized in the bloodstream of American politics and, to a slightly lesser extent, the rest of the world.

What’s more chilling is how astutely Bannon understands this impact, and his persona, even if in some cases the most he’s trying to accomplish is stopping the bleeding on a flatlining program, candidate, or job opportunity. Klayman, an increasingly skilled observer as a documentarian, occasionally succumbs to her own curiosity, or maybe incredulity, to ask him a question about his more glaringly controversial comments, or positions, but mostly, her quiet, unobtrusive gaze exposes his flaws without requiring interjection.

As more and more films and documentaries are produced about Bannon, Karl Rove, Dick Cheney and a seemingly endless string of unscrupulous GOP strategists, there is an understandable worry that chronicling their words and deeds will provide a platform to the dangerous and divisive ideas they espouse. “The Brink” demonstrates that these films can document their beliefs without validating them, and instead expose the humanity — both good and bad — that drives their behavior and burnishes their so-called authority.

Steve Bannon doesn’t need to be dismantled or made a fool because he’s already accomplished that task, simply by receiving the attention that he seeks; his ideas are insincere, intellectually bankrupt and easily disproven, and Klayman’s film supplies just the right amount of sunlight to make sure they burn up before taking further root.