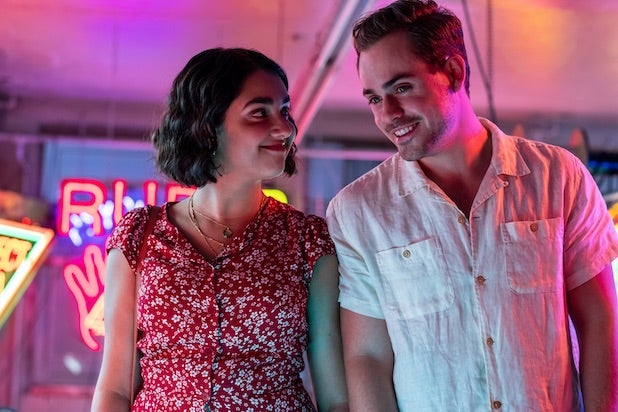 What if a date movie came out at a time when dating was a risky thing to do? What if a romantic comedy geared for girls-night-out excursions was released in a climate in which everybody was supposed to stay in? What if a rom-com about hanging out, hooking up and having fun in crowded places with your friends was released during a pandemic when none of those things are exactly encouraged?

Those are not hypothetical questions, and the makers of “The Broken Hearts Gallery” are about to learn the answers. So is Sony, which knew what it was getting in for: It acquired the movie in June and scheduled it to be one of the first major-studio films to make it back into theaters after the COVID-19 shutdowns, but the worsening pandemic pushed the original July 10 release date back for two months, to Sept. 11.

So now the agreeably frothy and occasionally touching summer movie is coming out at the tail end of a very strange and strained summer, an awkward time and situation for a film that celebrates community and connection. But maybe that makes it a tonic for these times – and maybe the fact that “The Broken Hearts Gallery” is also about letting go and accepting loss gives it an additional resonance, though it’s hard to think of it as much more than a pleasant diversion in a time that could use one.

In the film from first-time writer-director Natalie Krinsky, Geraldine Viswanathan (“Blockers,” “Bad Education”) plays Lucy, an inveterate collector who can’t let go of any souvenirs of previous relationships, from a rubber ducky won at a carnival to her ex-boyfriend’s dental retainer. She is, essentially, a hoarder, both physically and emotionally, and something of a mess who can’t stop talking and can’t stop justifying her behavior to herself and to everybody around her.

Lucy lives in one of those suspiciously large New York City apartments with Amanda and Nadine (Molly Gordon and Phillipa Soo); it’s all so rom-commy and sit-commy that on at least one occasion, a visitor seems to materialize inside the apartment as if they just leave the door unlocked.

So relentlessly annoying that many viewers will really have to work at liking her, Lucy begins the movie besotted with her “grown-up” boyfriend, Max (Utkarsh Ambudkar), and thrilled with her job at a tony art gallery. Before heading off to a particularly important opening-night soiree at the gallery, she announces to her friends, “It’ll be the greatest night of my life!” Amanda quickly retorts, “That’s what people say in horror movies before they get herpes and die” – and while that’s not exactly correct since herpes is not exactly a horror-movie staple, it is true that people in romantic comedies who say they’re deliriously happy in the first 10 minutes are destined to not be happy very quickly.

So in short order, Lucy loses her boyfriend and her job and finds herself in abject (but very chatty) misery. But in the midst of her grief she has a meet-cute with Nick (“Stranger Things” star Dacre Montgomery), when she mistakes his car for an Uber and refuses to listen to his explanation until he gives her a ride home. It takes a second meet-cute (he pulls her out of a restaurant when she’s about to create a scene with her ex) before they start to connect after he delivers his diagnosis: “You’re a pessimist. You collect these things in anticipation that your relationships are going to end.”

Nick, it turns out, is renovating an old hotel that he’s named the Chloe and that he wants to turn into the coolest and artiest boutique hotel in town. Lucy soon commandeers a section of the hotel for her own inspiration: the Broken Heart Gallery, where people can dispose of objects from past relationships and Lucy can turn those memories into art.

And from this platonic relationship between two people who kind of get on each other’s nerves but are thrown together, it’s not hard to figure out the course of events. But hey, people don’t go to rom-coms for the surprises; they go for the laughs (occasional), the chemistry (middling) and the emotional and entertainment value found in the trip to an essentially preordained conclusion.

On that level, “The Broken Hearts Gallery” is relatively satisfying. The film has some awkward edits and some jumps that suggest things are missing, but as a female-centric romance, it is breezy enough to go down easily. And the focus on coming to terms with endings can be genuinely touching at times, as it is when we finally learn why Lucy is such a collector.

Grand is not otherwise a word you’d associate with “The Broken Hearts Gallery,” a pleasant summer movie put in the position of having to be more than that. But with its touch of melancholy and its nostalgia for crowded bars and new loves, it could lighten the mood a bit for whatever people are ready to head back into theaters.