For “Seinfeld” viewers still nursing the fantasy of sex with a gymnast, “The Bronze” takes that dream beyond the potential benefits of flexibility. The most-talked-about scene in this crude, caustic, yet often laugh-out-loud funny satire about faded celebrity is sure to be the one in which bronze-placing former gymnast Hope (Melissa Rauch, “The Big Bang Theory”) and her gold- and silver-winning peer, Lance (Sebastian Stan), get down like they did when they were kids. Except “get down” isn’t exactly correct: Their interlude is more aerial, with multiple handstands, midair twists and acrobatics (with precision aim) that are certainly not featured in the “Kama Sutra.”

Other than these comically explicit few minutes, “The Bronze” earns its hard-R rating entirely due to Hope’s mouth. Written by Rauch and her husband Winston Rauch, the story features a bitter leading lady with a raw vocabulary that she never censors, even with her pushover father (Gary Cole). He does, at least, occasionally respond in kind: When Stan threatens to cut off Hope’s $500-per-week allowance because she’s been stealing cash from the letters in his mail van, Hope responds that she’ll have to resort to unsavory acts in bus-stop restrooms. But Stan calmly counters, “Look, I never said that dirty dicks were the solution here.”

Why is Hope so angry? Despite being the star of her small Ohio town, getting free food and veritable genuflection whenever she goes out in her red-white-and-blue track suit, Hope’s star power is fading. Her big moment — winning the bronze in women’s gymnastics because she pushed through and nailed the final competition after injuring her foot — was over a decade ago, and her injury ended her career. Her trainer did, too; Coach Pavleck (Christine Abrahamsen), a bear of a Russian woman, refused to overlook the warnings of Hope’s doctors, leading to a years-long rift between the two.

And now there’s new blood on the block, a tooth-achingly sweet and somewhat unrealistically naive teen named Maggie (Haley Lu Richardson), who’s allegedly the next big (little) thing in gymnastics. Hope nearly busts a blood vessel when Maggie runs into her at Hope’s favorite diner, all gushing adoration. But when Coach Pavleck meets a tragic end and promises to leave Hope $500,000 if she’ll train Maggie, well, that changes things. Slightly. 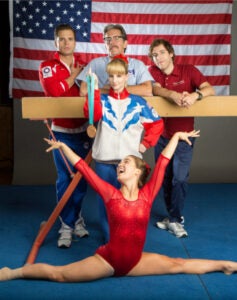 Besides its gymnastics milieu, “The Bronze” doesn’t offer much in terms of originality; in fact, its arc is nearly romantic-comedy predictable, and Hope is overall too knee-jerk mean to like very much. But Rauch’s timing is impeccable, wringing a smile even after minor jokes. (“Shut your cockhole.” “My what?” “Don’t worry about it.”) As for the bigger laughs, it’s obvious that “The Simpsons” is an influence, with one particular line clearly borrowed and reworked. (Even the structure of this film’s “Cursing hurts God’s heart” idea is similar to Rod/Todd’s “Lies make baby Jesus cry.”)

“The Bronze” does get sentimental, and not just because Hope continually uses her mother’s passing, when Hope was five-and-a-half-months old, for pity. Stan pulls a little trick to unwittingly spur his daughter to do something with her life. A rivalry with another trainer makes Hope change her initial coaching strategy of gleefully sabotaging her young charge. Even when she seems to say something unforgivably horrible to Maggie, it’s actually just a fleeting thought while something uncharacteristically supportive comes out of her mouth. And an unlikely romance? You got it.

To be fair, only a couple of these twists are heavily telegraphed, so if you’re the kind of moviegoer who’s happy to just watch and see what happens, the film offers one or two surprises. And when its humor lands, Rauch ensures that it sticks.