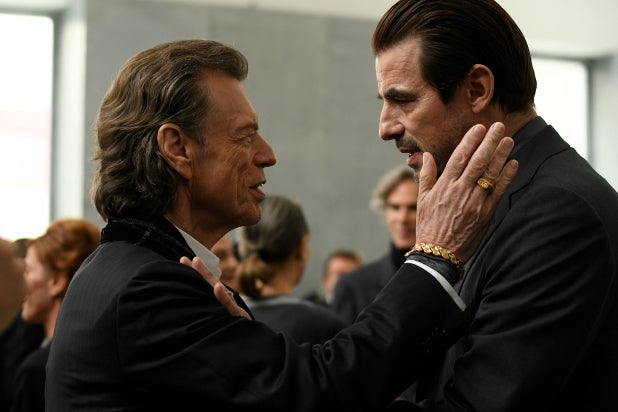 Knotty in the way mystery movies used to be, Giuseppe Capotondi’s neo-noir thriller “The Burnt Orange Heresy” slowly entraps an unsuspecting victim within its thorny plot and keeps the audience guessing — up to a point.

If we’re familiar enough with these stories, we might predict what darkness lies ahead for these characters. But even if the tale feels a little stale, a little dated, the electric performances between the three main leads — Claes Bang, Elizabeth Debicki and Donald Sutherland — restores its sense of mystery.

The movie opens on a dashing art critic practicing his presentation as he works out, gets dressed and packs his books to sell. James Figueras (Bang) eventually gives the performance to a group of aging tourists who watch him defend his noble profession with an impish smirk. James tricks and deceives his listeners with half-truths and whole-lies but doesn’t seem to have any moral or ethical issues with deception.

Berenice Hollis (Debicki) enters and sits in the back, and the two almost immediately lock eyes on each other. They don’t seem to know one another, but they soon will. Their tryst leads to an impromptu trip to the summer home of wealthy but ruthless art collector Joseph Cassidy (Mick Jagger). Charming in front of his other guests, Joseph pulls James aside and blackmails him to procure a painting from the press-shy artist living on his estate, Jerome Debney (Donald Sutherland). Jerome proves to be candid in the right company — he takes a particular liking to Berenice — but James can only hide his desperation for so long.

What really sets “The Burnt Orange Heresy” ablaze is the chemistry between Bang, Debicki and Sutherland. Each of their characters functions as a sort of walking puzzle, their motives slowly revealing themselves only as the story develops. Although James acts like he’s the toast of the art world, in reality, he’s barely staying afloat financially while covering an increasing dependence on pills. Over the course of the film, Bang pulls a Jekyll and Hyde-esque transformation, revealing the monster behind the façade of the debonair critic.

Berenice has her own mystery to hide, as she coyly dodges James’ questions about her past, and Debicki plays her part like a sphinx with a soft Mona Lisa smile. She’s a poised presence in every room yet avoids being the center of attention. It’s Jerome who finally gets Berenice to open up; perhaps he senses a kindred sadness in her. The artist is dealing with his own past regrets and the pressure to produce art for collectors like Joseph after his previous life’s work was destroyed by a fire.

Sutherland alternates between a paternal figure worried about Berenice and an eccentric artist who interrupts, tells stories and makes odd demands. Although seen in only scant parts of the movie, Jagger’s character comes off like a menacing Cheshire Cat, smiling to hide his more questionable actions, licking his lips as if he’s about to pounce on his next victim. James always believes he’ll be next.

Director Capotondi transports these volatile characters to a romantic Italian location that brings to mind “The Talented Mr. Ripley” in both the setting and the action. It’s so idyllic that even a bog-like spot choked with mosquitos is worth checking out for old ruins. Through the lens of cinematographer David Ungaro (“Mary Shelley”), there’s an artful stillness to the on-screen chaos, almost to an unnerving degree. The movie leans heavily into shades of blue, which is orange’s opposite on a color wheel — perhaps to make the movie’s namesake painting pop all the brighter on the screen when it’s eventually revealed.

Based on Charles Willeford’s eponymous novel and adapted by Scott B. Smith (“The Ruins”), “The Burnt Orange Heresy” retains that throwback feel, especially in the way it treats Berenice’s character. But even with a few drawbacks, there’s still something suspenseful in this neo-noir riff on Edgar Allen Poe’s “Tell-Tale Heart.”

From “SNL” to nearly starring in a Werner Herzog classic

Happy birthday Mick Jagger! The Rolling Stones frontman turned 75 on Thursday, and he hasn't lost any of his trademark swagger. After decades of rocking out, he's found more than a few choice TV and movie moments throughout his career: everything from numerous cameos and hosting stints on "SNL" to working with directors like the Maysles Brothers and Werner Herzog. Check out some of his other greatest licks below: