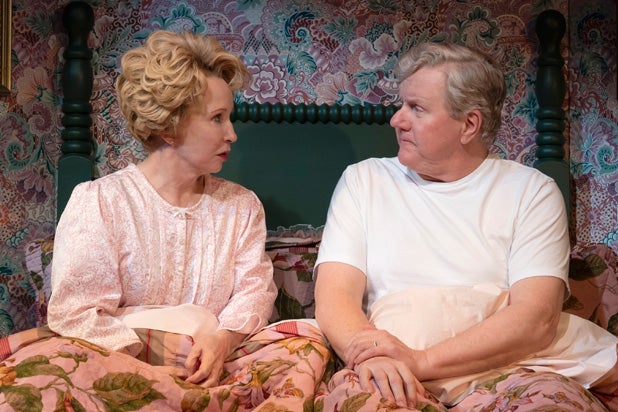 Debra Jo Rupp, best known as the mom for all eight seasons of “That ’70s Show,” is a bizarre cross between Barbara Harris and Mitzi Gaynor. Add a Southern accent to that intriguing amalgam and you have her lovable bigot named Della in Bekah Brunstetter’s new play, “The Cake,” which opened Tuesday at MTC’s City Center Stage 1.

Rupp makes Della very much worth watching in her opening monologue as she tells us how to bake a cake. She’s a baker and her cake shop is located in Winston-Salem, North Carolina. Della is funny, homespun and thoroughly committed to the art of turning us all into diabetics. When Della’s talking butter and sugar, “The Cake” tastes just right. When Della segues to the Bible, the play is very underbaked.

A note-taking reporter named Macy (Marinda Anderson) sits in Della’s bakery. Why a journalist would find Della of interest is never revealed, but that doesn’t stop Macy from asking about that colorful Noah’s ark cake in the bakery’s display case. Della quickly apologizes. She would have added dinosaurs to the boat’s menagerie if the little plastic critters hadn’t sold out at the local Hobby Lobby or some such excuse.

Yes, this sweet-tooth baker is a white Christian literalist and homophobe who finds herself suddenly too busy to bake a cake for Macy’s impending wedding to her fiancée, Jen (Genevieve Angelson), who is an old friend of Della’s family.

Let the tired Old Testament debates begin! Macy, of course, is having none of it and she wants to know: If marriage is only to procreate, why is the childless Della still married to her plumber husband, Tim (Dan Daily)?

Much more intriguing is why a smart lesbian of color like Macy would marry, much less ever date, a simpering Southern white magnolia like Jen, who is a repressed lesbian hellbent on spending $30,000 on a wedding that must take place in her hometown despite the fact she’s hesitant even to introduce her black girlfriend to Della?

How repressed is Jen? Her description of heterosexual sex turns out to be even more chilling than the Devil’s rape of Mia Farrow in “Rosemary’s Baby.” To its credit, Jen’s screed does take up, albeit inadvertently, the pressing issue of heterophobia.

Speaking of straights, the play also addresses the state of Della and Tim’s marriage. In addition to being childless, it’s also sexless. Apparently, all this lesbian talk with Macy and Jen pushes Della to get creative in bed with her own mate. The following remark may come off as ageist, but as a senior citizen myself, I don’t want to see actors of a certain age — almost any age, for that matter, unless they workout 24/7 — slather frosting or mashed potatoes on their body and request that someone else lick it off.

Lynne Meadow directs this odd sermon of a play.