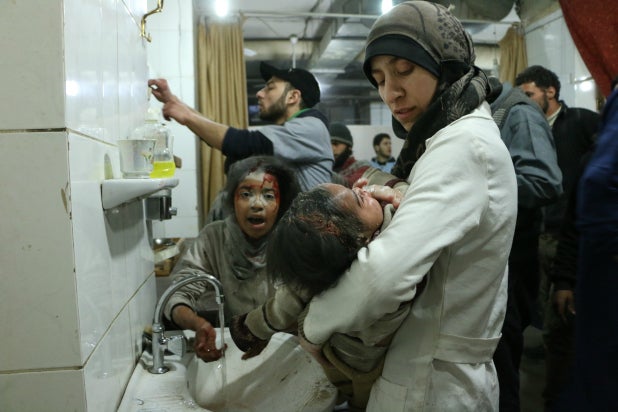 The plight of Syrians under aerial bombardment from the Assad regime (in sinister partnership with Russia’s war might) has been one of the more jarring subjects of late in the documentary world. Brave souls in front of and behind the camera have, in film after film, brought to vividly tense life the abiding terror of being relentlessly under siege, and trying to survive when your world is rubble, the sky kills, and death stalks the ruins.

Syrian filmmaker Feras Fayyad’s “The Cave,” the follow-up to his acclaimed White Helmets documentary “Last Men in Aleppo” from two years ago, is not just another installment from the front lines, however. In its intimate, nerve-rattling look at the hard work of doctors in chemically attacked Ghouta, treating patients in the titular underground matrix of tunnels and rooms beneath their targeted hospital, the movie also delivers an ironically liberating portrait of social progress by dint of whose medical heroism is being spotlit by the crisis: that of the hospital’s courageous women.

It’s a situation born of stark necessity, in which women and men must work together when aboveground a repressively patriarchal mindset would keep them apart. And what emerges in Fayyad’s gripping underground triage documentary is a compelling picture of compassion, grit, and feminist righteousness in Dr. Amani Ballor, a 30-year-old pediatrician who chose to stay behind in demolished Ghouta to serve children and bomb victims in a frequently supply-depleted, makeshift hospital bunker instead of fleeing.

Dr. Ballor is the Cave’s administration head, too, a fact that doesn’t sit well with the young husband of a patient in one early scene. When he says a man would do a better job, and that she should be at home, veteran male surgeon Dr. Salim starts to speak up for his colleague (and de facto boss) by reasoning with the husband about teamwork. But the satisfying kicker is Dr. Ballor’s blunt interjection, a discussion-ending, “No one tells me what to do.”

These and other keenly observed moments, including lighthearted workplace exchanges about food, birthdays and music (kind-faced Dr. Sahim likes to play classical videos on his smartphone during operations), alternate with the more frantic scenes of post-bombing crisis mode that at times give “The Cave” the air of a medical drama crossed with a horror show.

Throughout, Fayyad and his fleet cinematographers Muhammed Khair Al Shami, Ammar Suleiman, and Mohammed Eyad — operating in a verité style that mixes the intensity of emergency work with the occasional quiet of exhausted heroes fighting back dejection — keep us fully aware of just how turbulent this is psychologically. To watch young, gregarious nurse Samaher try to focus on making food for everyone in a cramped space while openly worrying she won’t be able to hear the sound of warplanes — her PTSD from prior attacks is visible on her face — is like watching any soldier in the trenches: You marvel at how anyone can do it, especially with as much good humor as she shows.

As with “Last Men,” Fayyad likes the kinds of cinematic touches (forceful music, elegant drone shots, thriller-like pacing) that feel intended to keep us from growing too weary from the surrounding nightmare. There are also occasional voiceover excerpts from Dr. Ballor’s diaries, expressions of doubt and longing which add just enough of an emotionally atmospheric touch to the visceral visuals. The only questionable creative choice comes after the movie’s organically powerful, melancholy close, when Fayyad adds a couple of underwater shots that feel like an arty overreach.

As Dr. Ballor battles the hateful destruction of her current reality and the repressive gender imbalance that is her society’s longstanding tradition, all the while dreaming of a better future for women’s independence, she unsurprisingly isn’t above a cynical outburst (“Is God really watching?”) or faraway, teary-eyed look of despair. She’s a palpably human hero, as are Samaher, Dr. Salim and shy Dr. Alaa, whose workplace friendship with Dr. Ballor is clearly a sisterhood balm for them both.

It’s a testament to the human resolve on display within the misery, though, that the strongest takeaway from “The Cave” is how Dr. Ballor saves her most comforting manner for the malnourished, bloodied children who fall under her care in this hell of hells. In perhaps the most poignant exchange in the movie, she elicits a hard-won smile from a dazed girl whose father was killed by a bomb, then gently talks to her about the necessity of living “so we can become something important.” You can almost see the future medical student stirring to life in the traumatized child’s eyes — an exquisite scene of impossible nurturing from the inner lip of an abyss, and a human expression of hope we all need to be louder than any bomb.