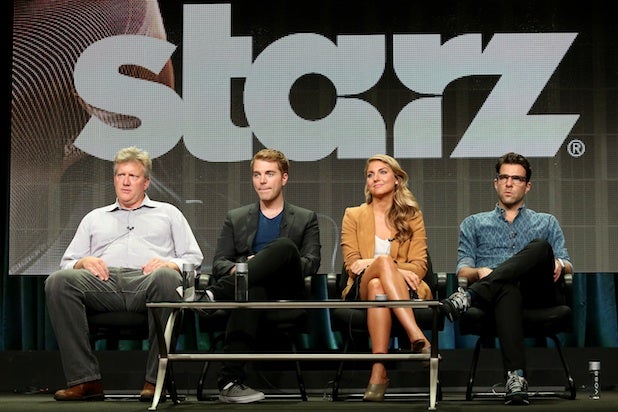 A risky venture, it took Chris Moore — whose many producing credits include “Good Will Hunting,” “American Pie” and HBO filmmaker competition “Project Greenlight” – three years to get someone to make “The Chair.”

“I’m still very grateful to Starz and [Starz CEO] Chris Albrecht for letting me do it,” Moore told TheWrap.

The filmmakers Shane Dawson and Anna Martemucci come from very different points of view. Dawson is a YouTube star. His channel has more than 10 million subscribers who enjoy his comedic parodies, which he also stars in.

Martemucci, on the other hand, comes from a deep indie film background. A writer first, she has been frustrated with directors she has worked with and is now challenging herself to do better as a director herself.

Both were challenged to produce their films on a $600,000 budget, shoot it on location in Pittsburgh (which is where a group of the project’s investors are based) and were given what very few first time filmmakers are granted: final cut approval.

Actor Zachary Quinto (“Star Trek,” “American Horror Story,” “Heroes”) and his producing partners Corey Moosa and Neal Dodson are also featured in “The Chair” as they join Moore and the script’s original producer, Josh Shader, to serve as mentors to Dawson and Martemucci in their quest to develop the winning adaptation. Quinto, who formed production company Behind the Door Pictures in 2008, is thrilled to pay it forward with “The Chair.”

“I wouldn’t be in this position if people didn’t take a chance on me, if people didn’t recognize something in me they wanted to nurture and celebrate, and amplify,” Quinto told TheWrap. “Now that I have the opportunity to do that, that’s a huge part of what motivates me, and it’s something that this show really fulfilled in me and allowed me to do, and hopefully will allow me to continue to do.”

In the end, “The Chair” producers will let the show’s audience choose the winning filmmaker, who will win a prize bundle of $250,000 (including office space), which Moore says will enable them the luxury of paying their bills while they look for their next project for at least another year.

“A year’s arbitrary, they can make the money last forever, but for a year after the show, all of 2015, they have the support to go out and try to continue getting more jobs as a director,” Moore said. “That’s what really matters to me.”

“Focusing on becoming a director is a full-time f–king job,” he continued. “It’s not something that you’re going to sit there and sort of do on your off time.”

“The Chair” premieres Saturday at 11 p.m. ET on Starz.

Watch a trailer for “The Chair” below: