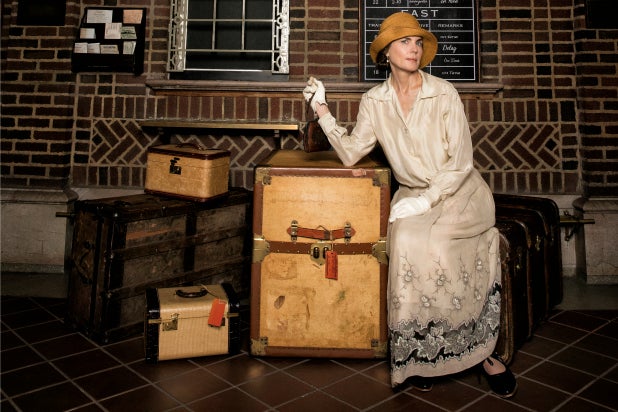 Written by “Downton Abbey” creator Julian Fellowes, “The Chaperone” appears to be targeting men and women above the age of 60. And while that’s a demographic as worthy of attention as any, those same viewers deserve a theatrical experience that doesn’t feel created for small-screen tidiness and flatness.

Adapted from Laura Moriarty’s best-selling novel, “The Chaperone” follows the rise of silent-film star Louise Brooks (Haley Lu Richardson). But before acting, it was dancing, first in Kansas, where Louise was born and raised, and then in New York City. The film spends most of its time on Louise’s summer adventure in the big city, where she is accompanied by Norma (Elizabeth McGovern), the titular caretaker.

Their dynamic is probably what you expect from a coming-of-age period drama: Louise is young and free-spirited, eager to be away from her cookie-cutter small town. She’s a skilled dancer and knows it. Each day New York makes more and more sense to her. The hustle and bustle is comforting. She believes prohibition is nonsense and enjoys the attention men (of all ages) give her.

Also Read: 'Diane' Film Review: Mary Kay Place Is Spellbinding as a Woman Whose Life Has Slipped Away

Conversely, Norma, who’s also eager to leave Kansas for the summer, is there to restrict Louise, to be a disciplinarian. It’s the typical teenager vs. authority figure clash, but it hits the same beat over and over again. Louise antagonizes Norma to no end, and Norma insists Louise remain a prim and proper lady — virginal, elegant, well-mannered. “No one man wants an unwrapped woman,” Norma explains. Louise fires back. Autonomy is her goal. She refuses to be repressed. Mainly, she’s 15.

The dynamic rarely leads to arguing. “You’re not very confrontational,” Louise says one night to Norma. “I don’t see what good yelling does,” she responds. This is the problem with “The Chaperone” in a nutshell. It lacks fire and fervor. It doesn’t need screaming matches, but it could use a dark coffee. It’s somnambulant and sluggish, a situation exacerbated by the peculiar editing from Sofía Subercaseaux (“Dina”).

In the case of Norma, the film attempts to give backstory through flashbacks. We see a woman in a challenging marriage, a former orphan left by her mother as an infant, trying to find her footing in the world. The film toggles back and forth between Louise, who continues to impress her dance instructors, and Norma, who decides to go searching for her mother. Her journey takes the film down an interesting path. An unexpected romance emerges in Joseph (Géza Röhrig, “Son of Saul”), a janitor who works at the home where the nuns have denied Norma’s request for more information about the adoption. Consequently, Joseph helps her.

Röhrig and McGovern have curious chemistry. It’s an unlikely pairing, and director Michael Engler seems to know it. There’s room to explore this unorthodox affair — the racial implications, the age gap — but once again, the film resists anything provocative. That PBS has picked up the movie is no surprise. Much of “The Chaperone” unfurls like a standard TV movie, a space with which Engler is familiar. His entire career has existed within the confines of television until “The Chaperone”; this marks his first theatrical debut.

The disconnect is apparent: The movie relies on its score (by Marcelo Zarvos, “Wonder”) for emotional cues, a tactic better suited for viewers passively watching on their couch than for theatergoers. Unfortunately the presentation is so often cloying and obvious that the performances and story suffer. There’s no space in this kind of film for subtlety; all the beats are spelled out by around the 30-minute mark.

The only true surprise is Richardson, who sporadically injects life into “The Chaperone.” In contrast to her taciturn character in “Columbus,” Louise is loquacious and arrogant. She’s determined to make it and doesn’t give a damn who knows it. Her flirtation is tactical and often used to exploit men’s objectification of her. When characters in the film predict Louise’s future stardom, it’s impossible to not think of Richardson’s own trajectory.

Ultimately though, “The Chaperone” is case of a not-so-good movie made by people who are unquestionably talented. Engler and Fellowes’ respective body of work speaks for itself. It’s exceedingly difficult to make an authentic period piece without a sizable budget, which it appears they did not have. The characters looked like actors playing dress-up more than people living in a time and place. When it finally makes its way to the small screen, many home viewers might not feel the difference.