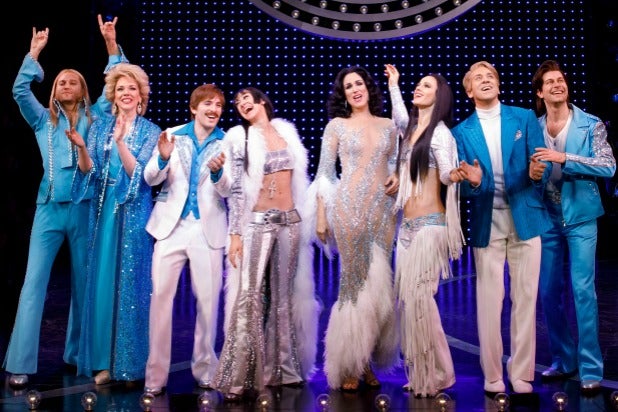 They could have titled it “Cher!” But the new bio-musical about Cherilyn Sarkisian, which opened Monday at the Neil Simon Theatre, embraces its small-screen roots by instead going with “The Cher Show.”

Being compared to television isn’t a compliment in the theater, but it’s probably what director Jason Moore, choreographer Christopher Gattelli and book writer Rick Elice intended: Watching “The Cher Show” is as much fun as watching old network TV, namely “The Sonny and Cher Show” on CBS. The jokes are lame, segues between scenes are blunt or nonexistent, and a general lack of inventiveness pervades the entire enterprise.

Only one dance numbers in “The Cher Show” manage to replicate the kind of grand, fun-loving awfulness that Cher brought to wearing Bob Mackie’s impressively tacky gowns throughout her career. Gattelli turns “Dark Lady” into a tango in which the very daring dancer Ashley Blair Fitzgerald is thrown around the stage by the male chorus in a way that’s supposed to signify Cher’s own stamina and superiority in a man’s world.

Tellingly, it’s the show’s most electrifying moment, and it happens when Block, Wicks and Diamond are off stage changing their costumes. In “Dark Lady,” the audience is left to wonder if Fitzgerald will leave the stage in one piece.

“The Cher Show” is the kind of bio musical where two of the star’s real-life love interests, Gregg Allman (Matthew Hydzik) and Rob Camilletti (Michael Campayno), are bestowed the same dramatic significance as an infomercial that Cher did at a low point in her bumpy career.

Even more bizarre: Chaz Bono never appears as a character on stage, except as a baby in a blanket, and is referred to only as Chaz, never Chastity, from birth onward. The behind-the-scenes negotiations between this son and mother, who is a producer of “The Cher Show,” might well have been far more dramatic than anything we see in the Neil Simon Theatre.

Sonny Bono receives much more stage time, and Jerrod Spector’s spot-on impersonation evokes major giggles from the audience every time he opens his mouth to sing.

Like the slightly more soporific “Summer” musical about Donna Summer, “The Cher Show” employs three actresses to impersonate its diva. They are identified in the Playbill as “Star” (Stephanie J. Block playing the mature Cher), “Lady” (Teal Wicks playing Mrs. Sonny Bono), and “Babe” (Micaela Diamond playing the youngest of them, including the early Sonny Bono-era Cher).

Most of the drama in Elice’s book comes from the three Chers comforting, supporting, arguing and chatting with each other. Wicks is given the thankless task of repeatedly acting pissed off at Sonny. The aptly named Diamond brings true gamine charm to her segments.

But the real star of “The Cher Show” is Block, who may be the best impersonator the Broadway stage has seen in recent memory. She even manages to exude genuine maternal warmth in her sage advice to the two younger Chers without ever losing any sass or swagger.

This gifted performer’s Broadway career began 15 years ago, almost to the day, when she played Liza Minnelli in “The Boy From Oz.” It’s time for producers to give her a completely original role, one crafted to showcase her own innate gifts as singer and actor.