Romantic dramas adapted from Nicholas Sparks novels are most appropriately experienced on a couch, under both a blanket and the influence of Nyquil. Their abundant pleasures, always indefensible and routinely ridiculous, are no less comforting for being so. Women in peril run to idyllic coastal towns, flannel-shirted men rescue them. Vintage pickup trucks park by the surf for Ina Garten-approved picnics, then run out of gas just in time for the lovers to make out in a downpour. Digital devices often go unseen, but writing mushy letters, huge stacks of them, is a very big deal. Lifelong devotion is the norm.

But if those well-worn tropes were the only attractions this alt-comic-book universe had to offer, the Sparks brand would have evaporated long before it cranked out nearly a dozen movies. Their old-fashioned romance strolls hand-in-hand with frequently operatic outlandishness. Characters find themselves trapped in burning buildings, suffering through sexy comas, or saddled with the burden of being a helpful ghost.

See Photos: All Nicholas Sparks Movies Ranked, From 'The Notebook' to 'Safe Haven'

Without the eroticized crawl of slow-motion auto accidents, the chaste allure of terminal illness, the metaphorical blast of literal meteorological tempests, satisfying comeuppances for snobs, and wild reversals of fortune, Sparks adaptations would be merely dumb and dull. We the people deserve every nutty coincidence, beautiful disaster, luxurious grief montage, and supernatural final-act reveal. Garbage-entertainment is still entertainment.

Why, then, does “The Choice” almost entirely opt out of its own game?

Travis (Benjamin Walker, “Abraham Lincoln: Vampire Hunter”) is a well-scrubbed, sub-McConaughey ladies man with floppy hair. He’s also a veterinarian (puppies!) and a championship grill master. Devoted to his widowed father (Tom Wilkinson, collecting an easy check) and a superfluous sister (Maggie Grace, saddled with what will almost certainly come to be known as 2016’s silliest screen wig), he’s the picture of chill. His neighbor, Gabby (Teresa Palmer, “Warm Bodies”), is a medical student who hates chill people but loves the seashell wind chimes she handcrafts in between studying sessions where many books are open on a table at the same time. She has a doctor fiancé (Tom Welling) and a healthy reserve of faux outrage for Travis’ barbecues.

Also Read: Tom Welling on Reprising Superman Role for 'Supergirl': 'It Would Be Kind of Odd'

The pair engage in the sort of empty, antagonistic banter that marks people who will be having sex very soon. “You bother me,” Travis tells her. He says this quite a bit, in fact, his very own catchphrase. He means it romantically, of course. She, in turn, rambles about the spiritual significance of her belief “in the moon and the stars.” 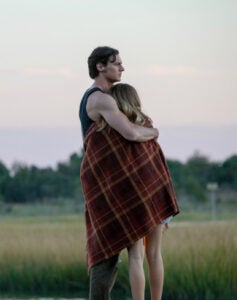 When they finally stop talking and start getting it on, he ditches his latest female companion and she abandons the doctor. Assisted by Gabby’s parents, he browbeats her into marriage. In the absence of a stalker ex-boyfriend to fear — a stock character in the world of Sparks — the film requires other external controls for its heroine, so it simply erases her free will. The script is fuzzy on whether or not she gives up the idea of a career in medicine, but crystal clear on the number of babies she makes with Travis as the years of blissful marriage roll on.

And then comes The Thing That Happens which leads to The Choice, neither of which will be revealed here. It is at this point in the narrative where, based on the original holy covenant made between author and movie adaptation gods, something crazy should go down. A left-field, third-act surprise. A shocking letter, unearthed from beneath a locket buried in a garden of sunflowers. Maybe one of those ghosts. But nah.

There is a script of sorts, from Bryan Sipe (the upcoming “Demolition”), and direction from Ross Katz (“Adult Beginners”) that involves a camera placed in front of actors, who then move and talk. The scenery is nice. Everything and everyone is very clean. Walker and Palmer, as the lovers, work with what little they’ve been given. But none of those elements are of any real consequence. There is no surprise, and there is nothing to care about.

The real blame, here, then, seems to reside in Sparks’ own source material. It looks very much like the author’s world, but it’s stripped of silliness, yearning and electricity. Its universe lazily collapses in on itself due to sheer monotony, its unseen yet omnipresent Sparksian Hand of God tires of playing with the cash-generating toy it patented.

Maybe the title is, itself, a move by Sparks, the comfortable author making a tepid joke about his own boredom. Call a story “The Choice,” but make sure it’s unconcerned with the choices it makes. Build nothing and ask an audience to admire it. Make sure the leading man repeats, “You bother me,” as his devotion builds, but in a film that can’t be bothered at all.