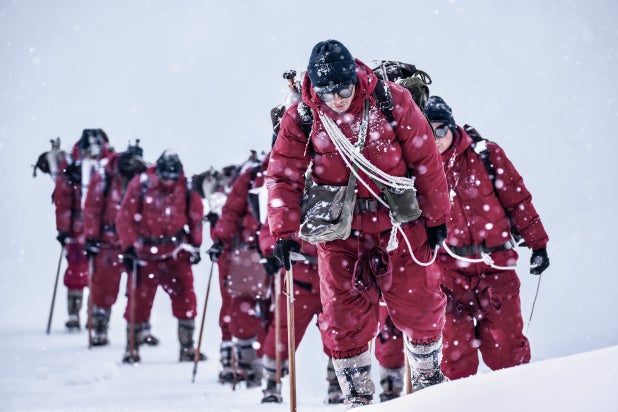 The Chinese mountain-climbing adventure “The Climbers” works best when it’s an old-fashioned macho melodrama about the hardships faced by the first mountaineering team to document their summit of Mount Everest’s treacherous North-side in 1975.

In these scenes, writer-director Daniel Lee (“Black Mask”) and his colleagues deliver a less flamboyant but equally nationalistic mountain-climbing answer to “Top Gun,” one that’s mostly focused on the camaraderie and heartbreak that the (predominantly male) National Mountaineering Team faces whenever their stubborn but resourceful leaders Wuzhou Fang (Jing Wu, “Wolf Warrior II”) and Qu Songlin (Zhang Yi) press on in the face of avalanches, snow drifts, and other killer weather conditions.

Most action set pieces — which are the movie’s biggest selling point, given its IMAX presentation here in America — are marred by cheap-looking computer graphics and image-compositing, especially whenever the mountaineering team is super-imposed on the side of Everest during helicopter or crane shots. But impressive sound design, which makes every carabiner clink and boulder impact seem monumental, and Lee’s skilled use of close-up photography (combined with fast-cut montage editing) make “The Climbers” worth seeing on a big screen.

With that said: the film’s greatest strength is its headlining cast members, who work overtime to embody the superhuman ideals and plus-sized emotions at the heart of Lee and Tibetan-born co-writer A Lai’s somewhat creaky, mostly conventional men’s weepie/extreme sports scenario. Like the best testosterone-driven melodramas, “The Climbers” is more compelling when it’s about the ties that bind its male characters than any scene that revolves around a hetero-romantic couple. Fang’s romance with bookish and unfailingly selfless meteorologist Ying Xu (Ziyi Zhang) is a little too chaste to be memorable, save for when he dives under a falling ice formation just so it doesn’t crush her to death. But Fang and Songlin’s strained relationship is genuinely compelling.

Having previously survived a disastrous but still successful attempt at scaling Everest in 1960, Songlin is now bitter about dropping the camera that his teammates needed to prove their first historic summit. Fang and Songlin’s frenemy-like rivalry is best realized in scenes where Songlin is too furious to look at Fang because Wu’s character, in a prefatory scene set during the 1960 summit, chose to save Songlin’s life instead of his equipment when they both almost flew into a crevasse.

But Fang and Songlin’s shared mission ostensibly matters more than their personal feelings for each other, which makes sense given that “The Climbers” is a representative piece of pro-mainland propaganda. Fang has to make it to the top, not just for his country, but for Xu, whom he is too shy to woo — they don’t even kiss until late in the movie — and for Songlin, who is weirdly angry about being alive.

Deferred stares and demure talk define both of Fang’s strained relations, but his friendship with Songlin is more involving since it’s more explicitly angsty. When Fang and Songlin drink to the success of their mission, Fang struggles to remain calm in the face of Songlin’s naked hostility, even when Songlin flat-out says “I hate you.” And when Songlin overworks enthusiastic neophyte climber Guoliang Li (Boran Jing) at a military-style bootcamp, Fang breaks the tension by tying a tractor tire around his waist and plowing through an imposing-looking obstacle course.

Lee and A Lai’s emphasis on Fang and Songlin’s relationship makes sense given that the Mountaineering Team’s members bond by surviving disastrous, and sometimes lethal mishaps, as in the (literally) sweeping scene where the team sets up camp in the middle of a storm, and are practically blown off the side of the mountain after crashing into a few boulders and ravines while clinging, as a group, to an oversized ladder. In another thrilling scene, a key cast member threatens to cut the rope that connects him with his over-burdened but otherwise well-secured teammates as he threatens to fall into a gaping ravine.

Superior mountain-climbing adventure movies like “Cliffhanger,” “Vertical Limit,” and “North Face” may have prepared film buffs for this scene’s inevitable conclusion, but it still packs a punch thanks to some dynamic and appropriately pulpy action filmmaking (including the best use of slow-motion so far in a 2019 movie).

Still, so much focus on Fang’s two main relationships puts a heavy burden on Wu’s performance. The action superstar thankfully delivers a performance that brings to mind Donnie Yen’s stoic but admirably calibrated performances in the “Ip Man” martial arts series. In those movies, director Wilson Yip made the most of Yen’s characteristic reserve and unassuming physicality.

Lee and A Lai also capitalize on Wu’s square-jawed charms, and give him a role that brings out the best in his Stallone-like shy-but-tough guy swagger. Fang is the kind of one-dimensional character that you only meet at the movies, so you probably already know where he’s going. Still, Wu’s convincing enough that you’ll probably still enjoy seeing him and “The Climbers” reach their destination anyway.