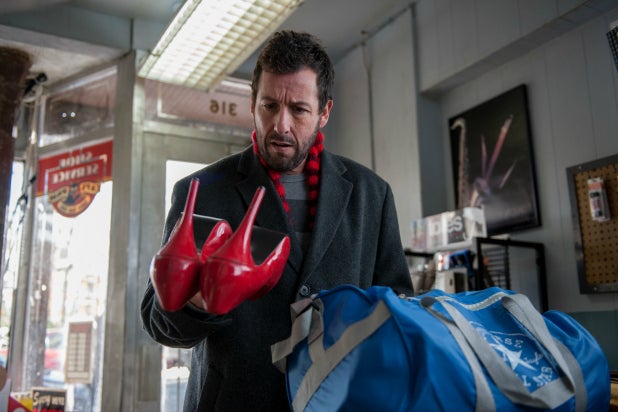 Some directors should just stick to realism.

Director Thomas McCarthy‘s best films, “The Station Agent” and “Win Win,” might tread toward the whimsical, but they mostly traffic in recognizable characters in relatable situations. But then there’s “The Visitor,” in which a constipated old white guy learns to love life with the help of some accommodating people of color, and you can feel the sweetness overpowering the filmmaker’s better instincts.

Cloying as “The Visitor” was, it barely scratches the surface of wrongheadedness, cutesiness and borderline racism on display in “The Cobbler,” a would-be comedy that clumsily combines magic shoes, daddy issues, gentrification, gangland violence and Adam Sandler, the latter doing that low-key, shut-down style of acting he delivers every time he’s working for a real director and not one of his Happy Madison flunkies.

Sandler, to be fair, isn’t the problem here; it’s the script by McCarthy and Paul Sado, which takes a promising premise and then drags it into oblivion.

Shoe repairman Max Simkin (Sandler) is a fourth-generation cobbler, working in the same Lower East Side shop where his great-grandfather (we learn in the film’s opening flashback) possessed a magical stitching machine, supposedly a gift from an angel. It’s not until Max’s electric stitcher breaks down that he pulls the old thing out of the basement and discovers its powers: After resoling shoes on it, when Max puts those shoes on, he turns into their owners.

It’s a body-switching premise that allows various actors, including Dan Stevens (as a wealthy club DJ), Clifford “Method Man” Smith (as a dangerous criminal), and Joey Slotnick, among others, to imitate Sandler-as-Max’s shuffling walk and dumbfounded facial expressions.

Before this discovery, Max was bitter and closed-off to the world after being abandoned by his father Abraham (Dustin Hoffman), who left Max to run the shop and to take care of the increasingly demented Mrs. Simkin (Lynn Cohen). The magic shoes give Max something of a new lease on life — after committing some petty crimes and pranks, he eventually starts using them as a way to save the neighborhood from an evil developer (Ellen Barkin, joyfully chewing the scenery) and to impress pretty community activist Carmen (Melonie Diaz).

Watching Max blossom (mostly in the faces of Sandler’s co-stars who are pretending to be him) has a certain charm, and it’s certainly nice to see Sandler and Steve Buscemi (as the barber next door) acting opposite each other in something that’s way smarter than “Grown Ups 2.” Once it starts delving into the crime and real estate subplot, with Method Man’s character turning out to be truly homicidal and psychotic, the movie’s delicate web of magical realism gives way to plain old ugly realism, and it’s not a shift in tone that McCarthy manages successfully here.

When it seems like the movie can’t get worse, it does, with a finale that’s just cringe-inducing and far too neat and tidy. It’s the kind of climax that undoes all of McCarthy and Sandler’s efforts to make us invest in Max and his story.

If “The Cobbler” has anything in common with the Happy Madison movies, it’s in its discomfort with anything that isn’t white, straight, male and bourgeois — concepts like bisexuality and cross-dressing rear their heads, only to be handled with cinematic stink-face, and most of the people of color in the movie are stereotypical gangsta types.

Fans of “Punch-Drunk Love” and “Funny People” keep clamoring for Sandler to make more movies that don’t have Dennis Dugan behind the camera, but choosing scripts like “The Cobbler” and last year’s universally drubbed “Men, Women & Children” aren’t going to make any of his demographics happy.