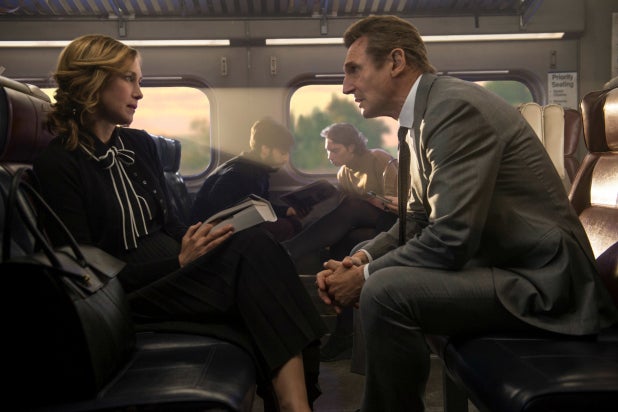 You may not know the name Jaume Collet-Serra, but the Barcelona-born filmmaker has become, without question, one of our great living B-movie auteurs. From the lurid shocks of “Orphan” to the woman-vs.-shark tension of “The Shallows,” Collet-Serra is a genre master, placing relatable characters into larger-than-life scenarios for maximum impact.

He’s also the unsung architect of Liam Neeson’s post-“Taken” career as an action superstar. While the sequels to Luc Besson’s 2008 hit were an exercise in diminishing returns, Neeson’s collaborations with Collet-Serra — “Run All Night,” “Unknown” and my personal favorite, “Non-Stop,” in which air marshal Neeson has to find the terrorist on a packed international flight — have been lean-and-mean action-movie standouts in an industry that often seems to have forgotten how to portray thrills and mayhem without burying everything in over-the-top CG effects.

Collet-Serra’s fourth team-up with Neeson, “The Commuter,” represents neither man’s finest work, but at its best, it suggests the snap and fun they’ve brought us before. Plot-wise, the movie most resembles “Non-Stop,” with the airplane replaced with a multi-car commuter train heading out of Manhattan toward upstate New York.

Neeson stars as Michael MacCauley, a retired NYPD detective turned insurance agent, happily living a cozy suburban life in Tarrytown with wife Karen (Elizabeth McGovern, underutilized) and son Danny (Dean-Charles Chapman, “Game of Thrones”). The MacCauleys have a second mortgage, and Danny’s headed to Rutgers in the fall, so it’s a devastating blow when 60-year-old Michael is downsized five years before his retirement.

No wonder, then, that he’s momentarily intrigued by a proposition from a stranger that afternoon on the train: Joanna (Vera Farmiga) wonders if Michael would undertake a certain assignment for her, one where he wouldn’t have to harm anyone but he would have no idea what would eventually happen to that person. He just has to find a specific passenger on the train, plant a GPS on him or her, and then collect the $25,000 that Joanna has hidden in one of the restrooms (as a down payment for an eventual $100,000).

Michael demurs, but he eventually seeks out and then finds the cash, sealing him in a devil’s bargain. Even though Joanna has left the train, she’s got eyes on Michael, and the consequences to his family and his fellow passengers escalate the longer that he refuses to do her bidding.

Like “Non-Stop,” this is a 21st century spin on the popular “Die-Hard”-on-a-[blank] genre, as Michael goes up and down the train cars searching for clues (the passenger he seeks has a ticket punched through to the end of the line in Cold Spring) and trying to prevent anyone else from getting hurt. (Naturally, his phone gets stolen from him early on, and his other attempts to alert the authorities are thwarted.)

Where “The Commuter” goes awry is in keeping Michael (and the audience) in the dark for so long. The screenplay (by a trio of writers) and editor Nicolas de Toth (“Stoker”) maintain the suspense and the uncertainty from the moment that Michael steps onto the train, but delaying the exposition means that the movie comes to a halt in the third act so that conspiracies can be explained and double-crosses can be crossed.

For much of its running time, however, this is a solid story, from an opening montage of Michael’s day-in-day-out (clock-radio awakenings, breakfasts, shaves, and train rides) to a tense stand-off with the police. (Naturally, they’ve been convinced by Joanna’s shadowy cabal that Michael is an unhinged kidnapper who’s keeping his fellow passengers hostage.)

Also Read: Lionsgate Picks Up 'Shaun the Sheep' Sequel and 4 Other Studiocanal Movies

Neeson can do this sort of thing with one arm tied behind his back at this point, but he gamely carries the film, even allowing himself (and his stunt team) to take almost as many punches as he delivers. (The fact that Michael is 60 comes up often, and while he’s a bad-ass former cop, he’s no superhero.) Farmiga makes the most of her one on-camera scene opposite Neeson before becoming a voice on a phone, and Patrick Wilson and Sam Neill turn up as Chekhov’s Character Actors, making a seemingly benign appearance in Act I for an eventual Act III payoff.

Collet-Serra’s movies have often been the highlight of an otherwise draggy January or February, and he’ll no doubt lift those winter doldrums again in the future. With “The Commuter,” however, he mainly seems to be just along for the ride.