Frightening rarely strikes twice in the same place, despite the efforts of so many horror sequels, but even if “The Conjuring 2” doesn’t deliver the delightful jolts of its predecessor, it maintains a consistent chill throughout, with a slow and steady dread that creeps up on you over time. (And let’s just forget “Annabelle” ever happened, shall we?)

Focusing on the mutually supportive relationship between ghost chasers Ed (Patrick Wilson) and Lorraine Warren (Vera Farmiga), “The Conjuring 2” is as interested in the power of love and marriage as it is in furniture smashing itself against the wall and levitating children speaking with the voices of craggy old dead men.

See Video: 'The Conjuring 2' First Trailer Is Creepy and Disturbing as Hell

Once again, the Warrens just can’t keep out of creepy basements; a pre-credits sequence finds them investigating the haunted Lutz home in Amityville, New York, the 1970s haunting that, real or not, made the couple famous. During a séance, Lorraine steps into the shoes of the man who murdered his family there before encountering a horrifying nun, one whose ghastly pallor suggests Sister Marilyn Manson. Returning to her own body, Lorraine gasps, “This is as close to hell as I ever want to get,” not a smart thing to say before the titles have even come up.

Besides seeing the twisted sister, Lorraine also had a vision of Ed’s death, making her want to give up the demon-busting business. Her dreams of retirement are shattered just a year or so later when young Janet Hodgson (Madison Wolfe, “Joy”) starts teleporting through the floor of her home in Enfield, a working-class borough of London. Creepy toys start coming to life, weird noises come out of the walls, and it’s more than single mum Peggy (Frances O’Connor, “The Missing”) can handle. 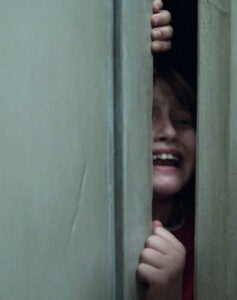 The Hodgsons have gone to the media before going to the Warrens, which means our heroes have to contend with the attentions of fellow paranormal experts — some dubious, and others credulous. And while a council flat in Enfield certainly wouldn’t be Edgar Allen Poe‘s idea of a haunted mansion, returning production designer Julie Burghoff provides plenty of unsettling dark corners, plus a level of damp, draft and rot that we rarely see when Hollywood shows British homes.

(Burghoff and her team also do a great job of capturing 1977 interior design choices, from the posters of David Soul and “New Avengers”- era Joanna Lumley in the Hodgson girls’ room — matching the photos of the real thing that run under the closing credits — to the then-ubiquitous Will & Ariel Durant “The Story of Civilization” collection on the Warrens’ bookshelf.)

Director James Wan, perhaps mixing things up after “Furious 7,” takes a measured approach here — there are a lot fewer jump scares than there were in the first “Conjuring,” but he and the four credited screenwriters do at least play with the requisite haunted-house playbook here with some interesting misdirects and an undercurrent of unease that escalates so very subtly.

In the first two “Insidious” films, Wan gave actresses like Rose Byrne and Lin Shaye a platform to play steely, multi-faceted characters, and “The Conjuring 2” provides similar opportunities to Farmiga and O’Connor; even when they’re rightly scared out of their wits, neither is a shrinking violet and both are bound and determined to protect their families. (One might question what happens to the Warrens’ teenage daughter when her parents traipse off to England to chase ghosts over Christmas, but perhaps she’s spending the holidays with friends in a non-haunted house.)

Audiences expecting a repeat fright-fest might be disappointed in the relative restraint of “The Conjuring 2,” but this sequel — lesser but not entirely unequal — has its own goosebumps to raise.