(Warning: This post contains spoilers for Wednesday’s midseason premiere of “The Conners.”)

“The Conners” returned from its midseason hiatus on Wednesday with special guest star Candice Bergen and a huge surprise for Ben.

“It was great fun to have Candice on the show — obviously a juggernaut in our business — and it was just a lot of fun to be able to watch her and to get to work with her,” Jay R. Ferguson said in an interview with TheWrap. “She’s hilarious and had a lot of great stories to tell. It was fascinating to have her around and her energy was a real dream come true.”

The “Murphy Brown” star, who joins the ABC sitcom as Ben’s judgmental mother, first appears in Wednesday’s episode bearing the news that Ben’s father has died — oh, and he wasn’t Ben’s real father. Ben, it turns out, was actually born of an affair his mother had with a man named Richard, whom he later comes to know as “dead Richard with the heavy coat.”

“For Ben, he suddenly, in that moment, realizes why his dad treated him the way he did growing up,” Ferguson said. “He had always thought it was something that he had done, but to find out it wasn’t … I think that while there’s shock, there’s also a little bit of relief that he has some of the answers he craved for so long. Now he knows that it had nothing to do with him, so I think that probably helps him out a little bit.”

Toward the end of the episode, Ben expresses interest in learning more about “dead Richard with the heavy coat,” but Ferguson said he hopes for more opportunities to explore Ben’s relationship with his mother down the line.

“I’m sure for [Bergen’s] character, it’s probably more resolved for her than it is for [Ben],” Ferguson said. “For Ben, it leaves a lot more questions than answers. So I’m sure that there’s still a lot of baggage to unpack there. And perhaps we’ll get to see that in the future.”

Ferguson is hopeful Bergen will return — if not for the emotional drama, then at least for the opportunity to see the actress interact with more of the cast.

“She kind of starts to butt heads with a few members of the family [in the premiere], so I think that could present some interesting scenes in the future, if we’re lucky enough to have her again,” he said. “Between her and Dan [John Goodman], and her and Jackie [Laurie Metcalf], there’s a lot of fun to be had there.” 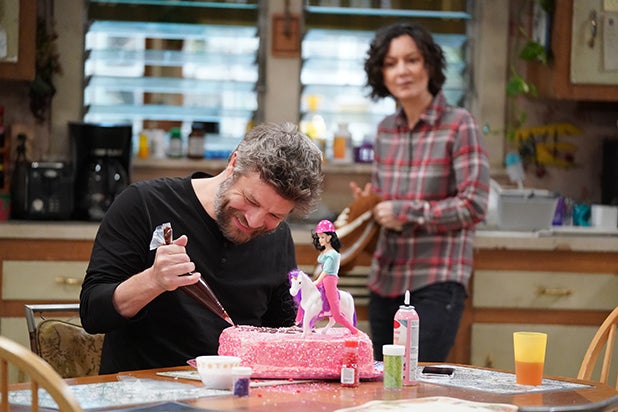 “The Conners” airs Wednesdays at 9/8c on ABC.