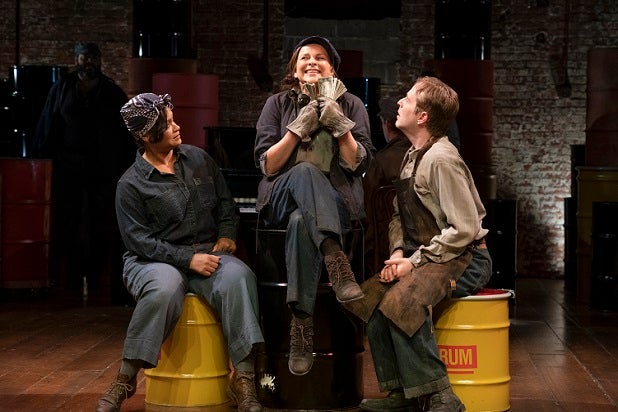 Unit sets are commonplace to stage a play. More unusual is using one set for a company’s season. That’s what director-designer John Doyle has done with most of his  2018-2019 season at the Classic Stage Company. A revival of Marc Blitzstein’s 1937 musical, “The Cradle Will Rock,” opened there Wednesday, and its barebones set is nearly identical to what Doyle used for the recent “The Resistible Rise of Arturo Ui” and “Carmen Jones” (set design by Scott Pask).

Perhaps it’s part of CSC’s new “go green” policy, which also includes not giving out paper programs in the theater. Instead, theatergoers are told pre-curtain to turn on our cellphones — yes, turn on all those cell phones in the theater! — to hook up to a digital program of credits. Some of us don’t even carry cellphones into the theater — maybe only one of us — for fear the thing will go off during a performance.

More “go green” is Doyle’s double- and triple-casting of actors, which often requires you study the credits beforehand to make sense of what you’re about to see. A better solution than digital programs would be to ask theatergoers to return paper programs so they can be recycled.

Now that I got that off my chest, Doyle’s patented minimalist approach worked best for Oscar Hammerstein II’s take on Bizet; the narrative is stronger and more linear in “Carmen Jones.” Brecht’s “Arturo Ui” and Blitzstein’s “Cradle” aren’t only more episodic; the scenes are piled on top of each other, the connective tissue of a story being much less obvious. When the actors aren’t switching roles, they’re busy rearranging the stage furniture, which, in the case of “Cradle,” amounts to a few barrels.

“Cradle” is more noteworthy for its very fraught premiere in 1937, under the direction of Orson Welles, than for what Blitzstein actually wrote. The workers of Steeltown are controlled by the arch-villain Mr. Mister (David Garrison), who uses the press, the hospital, the arts and the university to bring down the union organizer (Tony Yazbeck).

Blitzstein isn’t subtle and neither is Doyle, who has Mr. Mister throw around an increasingly large roll of dollar bills whenever he wants to buy someone off. At show’s end, the actors here are knee-deep in paper money.

Doyle always seems to capture one truly memorable performance. In “Arturo Ui,” it was Raul Esparza; in “Carmen Jones,” Anika Noni Rose. “Cradle” doesn’t provide such a star turn, but Lara Pulver mesmerizes in the supporting roles of the Moll and Sadie. Her scenes with Yazbeck and Benjamin Eakeley (the Reverend) emit a palpable heat.

Eakeley and the triple-cast Eddie Cooper display great singing voices, and it’s a treat to hear them unamplified. Another effective touch are the four actors who rotate playing the piano.