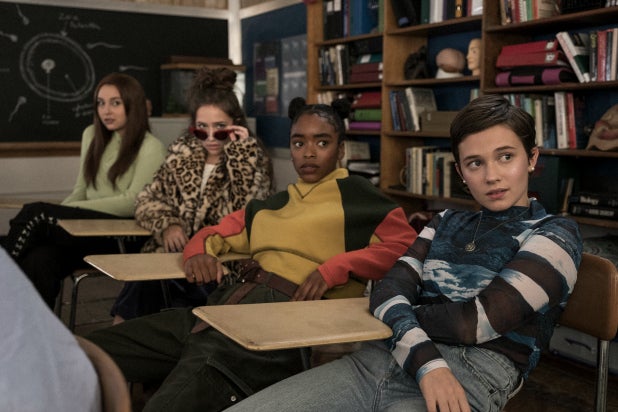 There’s a mother-daughter sing-along to Alanis Morissette in the opening sequences of “The Craft: Legacy,” which seems to be a subtle reminder that it’s been a while since the 1990s, and that this sequel-reboot is not here just to retread the terrain already explored by 1996 cult hit “The Craft.”

Whereas that earlier examination of teenagers forming a powerful coven often plays like a cautionary tale about hubris and unchecked power, this new chapter, under the guidance of writer-director Zoe Lister-Jones (“Band Aid”), revels in a quartet of outcasts discovering their capabilities, and it gives them an outside force to battle, so that they have something to do with their spells besides get revenge on the mean girls.

Lily (Cailee Spaeny, “Bad Times at the El Royale”) is the new kid in school, having moved with her mom, Helen (Michelle Monaghan), to live with Adam (David Duchovny) — a therapist and best-selling author focused on men reclaiming their masculinity — and his three sons. The unexpected arrival of her period during class brings a trio of girls into Lily’s life: Tabby (Lovie Simone, “Selah and the Spades”), Lourdes (Zoey Luna, “Pose”) and Frankie (Gideon Adlon, “Blockers”), who do a reverse “Carrie” and instead offer support (and a clean pair of gym shorts).

Also Read: How 'The Craft: Legacy' Made an Inclusive Space for Trans Star Zoey Luna

After unsuccessfully attempting to be a coven of three, they are delighted to realize that Lily is the fourth they’ve needed to complete their circle, and very quickly they begin to explore their powers, from telepathic communication to freezing time to casting a spell on jock-bully Timmy (Nicholas Galitzine, “Handsome Devil”) that turns him into the most elevated, sensitive, open-minded version of himself. But wouldn’t you know it, right when the foursome splits over the ethics of using their powers, they are faced with an outside force that will bring them together.

Despite the Blumhouse branding and the Halloween release date, “The Craft: Legacy” isn’t particularly interested in being scary; audiences looking for a smart and subversive teen movie will come away satisfied, but those out for shocks and jolts will probably be disappointed. Still, this is the kind of long-delayed follow-up that feels like it was made by a fan of the first film, one who wants to celebrate and to unbind the protagonists’ repressed powers.

The sequel — which does, eventually, acknowledge the previous film, beyond the requisite “light as a feather, stiff as a board” callback — is also a stealthily LGBTQ movie: One character gets a monologue about accepting their own bisexuality that’s a much more nuanced representation than we usually get in mainstream movies, Spaeny’s character is straight but serves up baby-butch realness, and Lourdes is transgender, as is the actress who plays her. (Here’s one magical franchise that acknowledges that trans women are women, and thus, eligible to be witches.)

It would have been nice if Lourdes and her friends had been as fleshed-out as the foursome from the first movie, which was more of an ensemble piece; this time, it’s mainly about Lily, and while she’s an interesting character, her new pals (and her new step-brothers) get pushed to the sidelines even when it seems like they have stories of their own to tell.

Cinematographer Hillary Spera (“Run”) offers up plenty of autumnal crispness, and Monaghan makes the most of a somewhat thankless mom role in which she’s caught between her daughter and her new husband, but then absent when the plot kicks into spell-casting gear. Spaeny gives a relatable performance (she’s got the kind of eyes that always seem to be taking everything in and expressing everything out), but a sequel would be wise to have her share more screen time with the many other talented actresses around her.

Lister-Jones is clearly focused on character, and less so on genre conventions, so “The Craft: Legacy” could turn off some of the first movie’s fan base while simultaneously bringing new fans into the fold. As far as franchise revivals go, this one’s got the right elements.