Netflix shared a first-look at Princess Diana’s wedding dress for the upcoming fourth season of “The Crown” on Saturday, noting that it is not a direct re-creation of the real-life garment.

“Emmy award-winning costume designer Amy Roberts wanted to capture the same spirit and style of David & Elizabeth Emanuel’s original design, without creating a replica for Emma Corrin,” the official show account wrote in the tweet accompanying the image of Season 4 star Corrin as Diana on her wedding day.

As the 1970s are drawing to a close, Queen Elizabeth (Olivia Colman) and her family find themselves preoccupied with safeguarding the line of succession by securing an appropriate bride for Prince Charles (Josh O’Connor), who is still unmarried at 30. As the nation begins to feel the impact of divisive policies introduced by Britain’s first female Prime Minister Margaret Thatcher (Gillian Anderson), tensions arise between her and the Queen which only grow worse as Thatcher leads the country into the Falklands War, generating conflict within the Commonwealth. While Charles’ romance with a young Lady Diana Spencer (Emma Corrin) provides a much-needed fairytale to unite the British people, behind closed doors, the Royal family is becoming increasingly divided.

See the image of the wedding dress below and more images of Corrin as Diana and the rest of the Season 4 cast here. 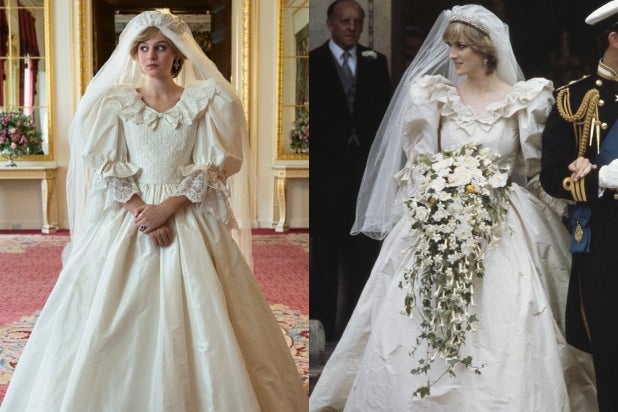 The momentous life and tragic death of Diana, Princess of Wales, seems to never grow old for Hollywood. From Kristen Stewart to Emma Corrin, here are nine ladies who have played the People's Princess -- or soon will.