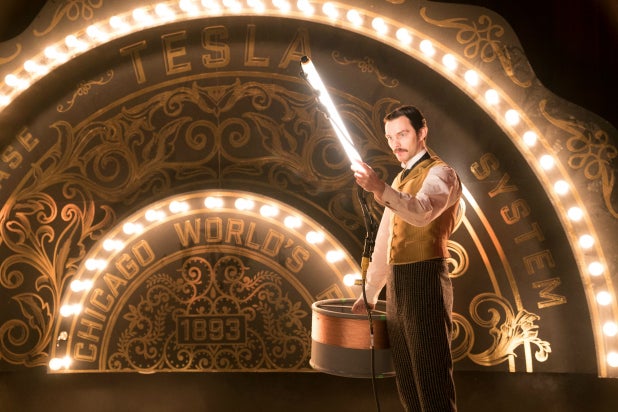 The celebrity-wannabe energy infusing contemporary culture’s understanding of tech executives, the most recent generational coat of paint applied to the corporate domination of everyday life, has found an unusual and ill-fitting home in “The Current War: Director’s Cut,” the latest film from director Alfonso Gomez-Rejon (“Me and Earl and the Dying Girl”).

Premiering at the Toronto International Film Festival in September of 2017, where it was received with a collective shrug, the film was then caught in limbo as its original distributor, The Weinstein Company, dissolved in the aftermath of sexual assault charges brought against company co-head Harvey Weinstein (whose producing credit here has been removed). While waiting for a proper theatrical release, Gomez-Rejon re-edited the film, hence its new colon-necessitating but not confusion-abating title.

Not that there’s anything confusing about this real-life 19th century drama. The story of Thomas Edison (Benedict Cumberbatch) and George Westinghouse (Michael Shannon) and their racing rivalry to be known as the most important name in the industrialization of electricity, “Current War” mostly sticks to what historians know about the events of the time, even as it tries to turn its characters, especially Edison, into forms more easily relatable for 21st century audiences.

Edison and Westinghouse — along with Edison assistant Nikola Tesla (Nicholas Hoult) — compete with different forms of electrical current: Edison with direct current (DC) and Westinghouse with alternating current (AC). The jockeying for position includes financial involvements with millionaire banker J.P. Morgan (Matthew Macfadyen), smear campaigns, the invention of the electric chair as a form of capital punishment, and misinformation about the safety of AC current (what was known at the time as “The Electric Wire Panic”).

It also involves a script from Michael Mitnick (“The Giver”) that includes a smirking, sharp-tongued Edison, a retrofit vision of the inventor as an analog for every self-congratulating tech “disruptor,” complete with an endless stream of autograph signings for wide-eyed, budding futurists in love with electricity. The character’s attitude fits Cumberbatch’s general on-camera air of superiority, and he seems happily at home bending his character with that energy.

Also Read: Jade Bartlett to Write 'Doctor Strange in the Multiverse of Madness'

It also provides an effective tonal foil for Shannon’s much more somber, much more earnest portrayal of the civic-minded Westinghouse. And though together they hoist the film on their shoulders and share much of the credit for it being watchable, it all leaves a weirdly bitter taste, one that suggests it’s less cool to want to leave a legacy of good deeds than it is to be famous for being first. But was Thomas Edison a smart-alecky badass in real life? And do we need him to be to care about his accomplishments?

Gomez-Rejon’s direction — and now post-post-production and tinkering over the past two years, with some scenes trimmed, new ones added — has delivered a streamlined and occasionally very silly machine. Incident after incident spans 13 years, and there are meticulously placed chronological and geographical guideposts helping the audience to keep track of who’s where, what they’re doing and why.

It’s a fast-moving, gliding conveyor belt of historical fact, an expanded remake of the “Schoolhouse Rock” “Electricity, Electricity” video nobody asked for, with a cinematographic punch to equal Cumberbatch’s 2017 vibes, thanks to director of photography Chung Chung-hoon (“The Handmaiden,” “Oldboy”). Chung’s camera rarely slows down, but when it does, it hands the audience light-socket POV shots and dutch angles, grandiose gestures befitting the movie’s flashy mission.

But in the end, it’s the story of two men fighting to see who can become the most rich, famous, remembered, and admired, rather than the story of what the birth of modern technology did to the country that fostered it. It speaks the language of climbers everywhere, but in the process reduces its very real historical innovators to two peevish regional managers in a sniping session, a dry duel set in the United States Patent and Trademark Office.