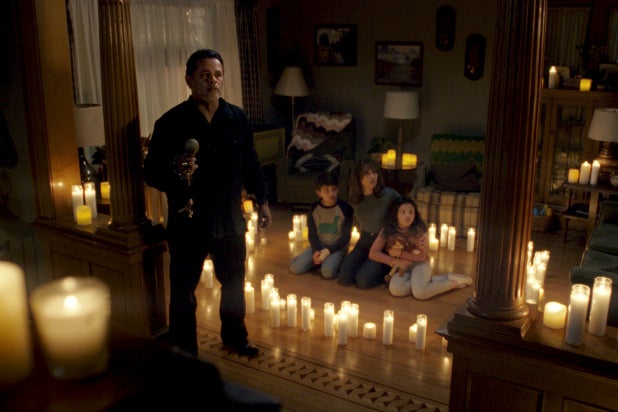 When I was about eight years old, my little sister and I developed a habit of sneaking out of our bedroom in the middle of the night to go watch TV in the living room. We weren’t the most stealthy kids, so obviously we were caught a few times. The last time we snuck out, it was our grandmother who found us watching Looney Tunes in the middle of the night, and as she yelled at us in Spanish, told us that if we continued to misbehave, La Llorona would come to snatch us both, and take us to be with her forever, because she looked for little kids who didn’t listen to their parents.

For many nights after, my sister and I laid still, staring at every shadow, jumping at every tiny sound, and wondering if La Llorona would get us if we dared get out of our beds. It’s that fear that I, like many other Latinx people, recall whenever we hear the name “La Llorona.” And it’s that fear that the film “The Curse of La Llorona” completely neglects, opting instead for predictable jump scares, a white savior narrative, and an oversimplified script from writers who have no connection to Latin culture, which may be its ultimate demise.

Anna Tate-Garcia (Linda Cardellini) has a lot on her plate: She’s a Child Protective Services caseworker, a mother of two children, and a widow of an LAPD cop. One of her cases, Patricia (Patricia Velásquez), has missed check-ins and appointments, so Anna has to make a surprise home visit. What Anna finds is a terrified Patricia, who has placed candles and charms all over her apartment, and locked her children in a closet covered in drawings of an eye (or as Latinos may know it, “el ojo”) to hide them from La Llorona. Anna removes Patricia’s sons from their mother and places them in a temporary shelter until they can determine if they are safe to go home, despite Patricia’s protests and screams that “she” will get them.

Within hours, the two boys are dead, found drowned in a river, near the shelter where they were staying. Patricia, in grief, yells that La Llorona took her sons, and it was all Anna’s fault. Soon, Anna herself is facing a terror she has never known, with La Llorona having attached herself to her own family. With the help of priest Father Perez (Tony Amendola, reprising his role from “Annabelle”) and curandero Rafael (Raymond Cruz, “Better Call Saul”), Anna tries to find a way to save her family from La Llorona’s grasp.

While first-time feature film director Michael Chaves has a great eye for detail, the choice to turn, dare I say, a sacred Latino folklore into a jump-scare monster movie was not the wisest decision. Cinematographer Michael Burgess underscores Chaves’ vision by evoking a truly creepy atmosphere, creating a whole different universe whenever La Llorona appears. However, when the film is viewed in contrast to the actual mythology the legend has maintained for generations upon generations of Latino families, it feels superficial, at best. In the stories Latinos are told, La Llorona has never been described as a monster (that’s reserved El Cucuy and El Chupacabra), yet in the film, thanks to some pretty disturbing makeup, she most definitely resembles one.

The horror that impacted me as a child grew not in what she looked like, but in how she could be watching me, or any child, at any time, just waiting for us to disobey our family; at any moment, she could take us to be with her, to die and exist forever in some unknown space between the living and the dead, all while being helpless in fighting her. Turning that scare factor into something that has very apparent audio cues, with about ten too many jump scare moments, takes all the scares, and the fun, out of the film.

Writers Tobias Iaconis and Mikki Daughtry (the duo behind “Five Feet Apart”) clearly have no connection to Latino folklore, as they give a beat-by-beat explanation of who she is, Cliff Notes-style. They don’t dare dive deeper into who La Llorona was, the deep patriarchal roots that created her and the history surrounding her, and the way Latino parents have used her story as a way to lovingly traumatize (unless you’re Latinx, you probably won’t get what that means) their children into obeying them. Not to mention, the writers take a very hallowed mythos that connects to every Latino culture in some way (each country has their own version of La Llorona, though the Mexican tale is by far the most common) and then center their story on a white woman. That’s a big problem.

Watch Video: Linda Cardellini, While Sitting Next to Seth MacFarlane, Says She Was Fired From 'Family Guy'

Cardellini’s not to blame here; she’s enjoyable to watch as Anna. But Spanish-speaking Patricia, the other mother in the story, is framed as crazed and, according to those who don’t understand her, possibly abusive. With a character arc that implies some form of wrongdoing on Patricia’s part, it’s hard not to see how the white woman is made to look like a savior while the Latina woman is made portrayed as a villain, while being “othered” constantly. Add that to how they created a caricature version of a curandero — with quick punch lines, a flimsy backstory, and a whole bunch of unusual trinkets (that are explained like a list needed to be checked off) — and it feels like the writers wrote a summary on what they read in a 1980s encyclopedia about Latino culture.

It isn’t to say that “The Curse of La Llorona” is bad; it definitely had the crowd I watched it with screaming in horrified delight and laughing at just the right moments. But it lacks any cultural understanding of its subject and is a missed opportunity to connect to the plethora of ghost stories the Latino culture contains in its soul. Que pena!