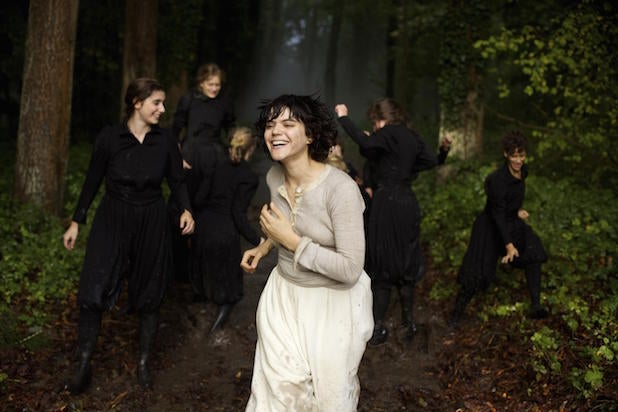 If for nothing else, we should all thank “The Dancer” for providing the perfect crystallization of the phrase less than the sum of its parts. Which is not to say it’s a bad film in any sense. Quite the contrary: “The Dancer,” which premiered at Cannes on Friday in the Un Certain Regard section, is a pretty good movie.

It just happens to be a pretty good movie with a number of sequences so breathtaking they will knock your socks off.

Those sequences are moments of performance, where our main character dances before a crowd. (It makes sense, given the film’s title.) Said dancer is Loïe Fuller, a real life cowgirl from the American West who made her way to Paris and became a star, astounding Belle Époque society with her “serpentine dance.”

That dance — a heady combination of textured fabric, sophisticated stage lighting and massive physical exertion — made Fuller world famous, to the extent that hey, they made a lightly fictionalized biopic about her a hundred years later

French actress and singer Soko plays Fuller, and plays her to a T. As a performer, Soko exudes a fevered intensity that makes her both a coldly compelling screen presence and somewhat difficult to cast. In Fuller, she finds her ideal showcase, capturing her character’s fierce drive, crushing timidity and zeal for performance like no other actor could. It’s an inspired bit of casting, and it counts among the film’s many gems.

The other boldface casting choice is somewhat less successful. Lily-Rose Depp, daughter of Johnny Depp and Vanessa Paradis, makes her big dramatic debut as dancer Isodora Duncan, and she’s fine, I guess. She moves with all the grace and confidence one needs when playing a genius of the form, and genetics have seen to that she certainly photographs well.

But most of her scenes feel wooden and lifeless, which is exactly what you don’t want when your character needs to drive Fuller mad with (creative and carnal) desire.

Of course, it could simply be lack of chemistry between the two actors and not a judgment on her talent. Whatever the case, Depp: The Next Generation will have plenty of opportunities to prove that in the years to come.

So you have a fairly standard biopic that hits the usual beats and has a couple of bum notes, but that explodes to vicarious life every time Fuller and company perform. And for that we have to credit director Stéphanie Di Giusto, a music video and ad director making her feature debut. Di Giusto shoots the hell out of those sequences – and by shooting the hell out them, I mean she holds her camera back in elegant long shots, letting the performance speak for itself. Just as any director should.

In contrast, Di Giusto really goes wild with a practice sequence set on a palatial estate, the dancers jumping and twirling and gliding through a muddy jog, all set to Vivaldi. It’s breathtakingly well staged, and it electrified the room.

Sometimes, that part that is all you need.