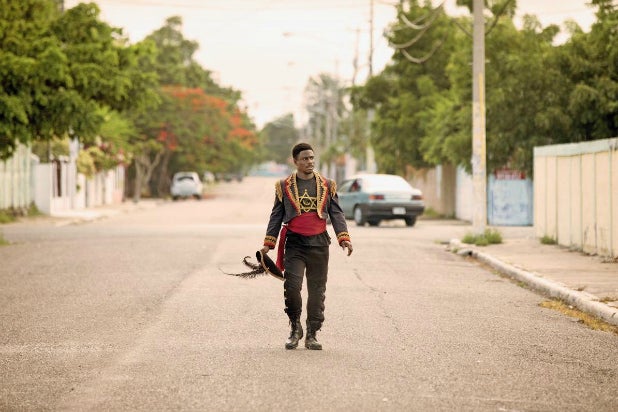 In Christopher Morris’ new satire, “The Day Shall Come,” the stories of many people in the United States are condensed into one bitterly funny but dark comedy about the shortcomings of our justice system.

On one side is a charismatic man with delusions of grandeur, Moses (newcomer Marchánt Davis). He oversees a peaceful sect based on a fairly convoluted belief system that references Black Islamist, Jewish and Christian traditions. Moses works with his wife, Venus (Danielle Brooks, “Orange Is the New Black”) on the farm, takes in former drug dealers off the streets, and preaches the gospel of nonviolence and communal living. However, his unorthodox prayers call out to the liberator of Haiti, François-Dominique Toussaint Louverture, and to Black Santa. It’s erratic enough behavior to get on the FBI’s radar, who deem Moses and his Star of Six group a possible threat.

What follows is a “Veep”-like look at the behind-the-scenes fumblings of the FBI. Driven by careerist aspirations, the group puts their self-interests above the need to do what’s right. Kendra (Anna Kendrick) leads the charge with shaky intel, feeding her boss Andy (Denis O’Hare) the false hope of a good case on which to end his career. As the FBI tries to trap Moses and frame him for intent to commit terrorist attacks, he proves not to be a traditional target, giving both the FBI and the movie their fair share of surprises.

Despite the serious subject, Morris gives “The Day Shall Come” a brisk and upbeat tone. Some situations are so silly, you can’t help but laugh. The movie excels at the snappy workplace back-and-forth dialogue between Kendra and her antagonistic all-male team, perhaps a beneficiary of Morris’ time as a director on “Veep.” The scenes of the FBI are mostly cast under the pall of fluorescent blue lights, contrasting against the bright warmth of the pink Miami home and rundown community farm where Moses and his followers work.

Morris struggles with how to approach Moses, an innocent yet strange victim. While it’s clear that he sympathizes with what the unfairly targeted man is going through, a number of the jokes are still at his expense. In treating everyone equally as fools, there’s a disparity in who can withstand that kind of lampooning and who gets maligned in the real world.

Unfortunately, Kendrick is not on screen enough to build out a great performance, but Davis uses her short scenes to dig into the humanity of his out-sized character. There’s a tragic element in the way that Moses doesn’t understand his betrayal, which makes the actions of the FBI seem even crueler. Like the bumbling jihadists of Morris’ previous film, “Four Lions,” Moses is nowhere near ready to become a terrorist, not that he’s trying to become one. It’s the government that villainizes him and his beliefs.

The one major fault in “The Day Shall Come” stems from treating everyone from the FBI to their poorly-sourced targets as buffoons, which absolves the FBI from the serious implications of its actions. In order to save their careers, the agents scramble to arrest someone more in need of psychiatric help than prison bars, undercutting the fact that not only did they upend the lives of four people — including Venus, who left before Moses fell to temptation —  but the FBI’s actions also affected their families, Venus and Moses’ daughter, and their Liberty City community.

“The Day Shall Come” is greatest when skewering power and shining a light on grave legal overreach. That we can laugh about it is great, but it’s a sign of our own security, of how unlikely we feel that we would be targeted in the same way. For others, laughing at this movie may not be so easy.