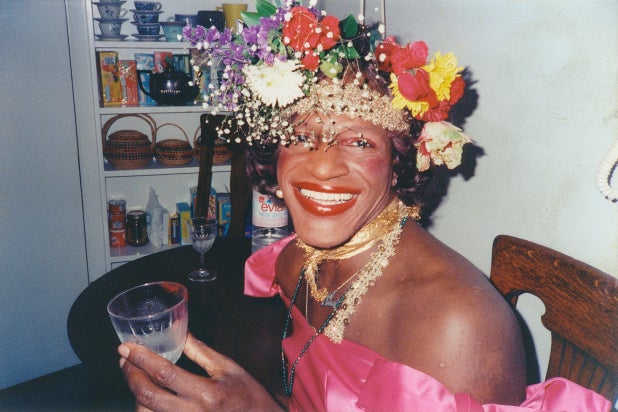 “If it wasn’t for drag queens, there would be no gay liberation movement.” So says a prominent transgender activist, adding: “Transgender women face the most severe violence within the LGBTQ community.” It’s these two assertions that form the heart and soul of the fascinating documentary “The Death and Life of Marsha P. Johnson.”

The film is ostensibly a whodunit seeking to determine who killed Marsha P. Johnson, the transgender LGBTQ rights pioneer and self-proclaimed New York “street queen.” But it also offers a historical look at the gay-rights movement, and particularly transgender activism. And it’s a poignant tribute to Johnson, whose body was found floating in the Hudson River in 1992. She had told friends earlier that a car had been following her. The police ruled her death a suicide, but most who knew the ebullient Marsha dispute that allegation.

“It certainly was not a suicide,” said Randy Wicker, her roommate. “Police made up their mind because to them this was a nobody. This wasn’t a person.” Following her death protests spread in Greenwich Village, with people holding placards that read “Justice for Marsha.” She is depicted, often with flowers in her hair, as a beloved and charismatic figure with a wide, radiant smile.

Director David France (“How to Survive a Plague”) follows Victoria Cruz, from New York’s Anti-Violence Project, as she doggedly works to re-open the cold case and get to the truth.

Johnson was known for her outspokenness on the issue of gay rights. A prominent figure in the Stonewall uprising of 1969, she became a founding member of the Gay Liberation Front and co-founder of Street Transvestite Action Revolutionaries (STAR) with her good friend, Sylvia Rivera. A New Jersey native, she also modeled for Andy Warhol and later became an AIDS activist with ACT UP. “It was hard being a drag queen back then,” said Rivera, who has since died of cancer. “They would take us into jail for no reason at all.”

On top of the mystery, or perhaps underlying it, the film has a powerful urgency. Anti-trans violence is on the rise and a disproportionate number of those assaults and deaths remain unexamined. That escalating violence makes knowing Johnson’s story all the more crucial.

At times it feels France’s film is attempting to take on too much: Johnson’s mysterious death, the rise of anti-trans violence and the arc of the gay rights movement. Even the mob has a part in the tale. Then, at times, you wish he had detoured more and provided a more expansive profile of Cruz, the person chasing down clues about Johnson’s death.

Cruz is a fascinating figure: A transgender activist who was a victim of assault, she has devoted her life to helping others who were also violently attacked. While she never met Johnson, she seeks to bring closure to her case, visiting Johnson’s brother and sister, former roommate and several friends and fellow activists. She listens patiently as friends offer tales of Johnson’s exuberant personality. France wisely intersperses footage of Johnson so she comes to vivid life for viewers as well.

A solitary, bundled-up figure, Cruz trudges around New York clutching a cane, following a bread crumb trail, hitting dead ends and soldiering on. She jots down the possible suspects: “dirty cop, Mob, 4 Guidos.” She’s given the bureaucratic runaround, but remains resolute and politely firm. She won’t back down and explains her determination with simple eloquence: “To me, [Marsha] was the Rosa Parks of the LGBT movement.”

We can’t help but yearn for more information about this determined, kindly person. A rifling through stunning photos from Cruz’s younger days and a few sentences of background are pretty much all we’re given. Cruz remains calmly compassionate through her endeavors, but when she learns that the killer of Islan Nettles, a trans woman, was sentenced to only 12 years in prison, she sheds a quiet tear, gazing at the river where Johnson’s body was found. That shot speaks volumes, and France’s direction shines in quiet moments like these.

France also intriguingly includes footage from a 1973 gay rights rally in which Rivera grabs a microphone and excoriates white middle-class gays for ignoring the transgender community. She is booed. This scene speaks volumes about intolerance, of the more insular variety.

What France doesn’t do quite as well is artfully knit together all these disparate strands. The tragedy of homelessness is introduced but not followed through, particularly in the treatment of transgender street people. He does, however, successfully intersperse riveting archival footage with candid interviews, and his choice of musical accompaniment is top-notch. The minimalist score by Bryce Dessner (“Transpecos”) is gorgeously evocative.

Underlying the film are essential messages: Early activists died for the rights that people now enjoy. And, sadly, injustice persists. While the documentary stops short of offering definitive answers on the mystery surrounding Johnson’s death, it pays homage to a vital LGBT icon. At the same time, it tragically traces a throughline from her death to the surge in recent anti-trans violence.

The film is vital for both its history and its currency. Above all, “The Death and Life of Marsha P. Johnson” works powerfully as a rallying cry for tolerance, love and understanding.