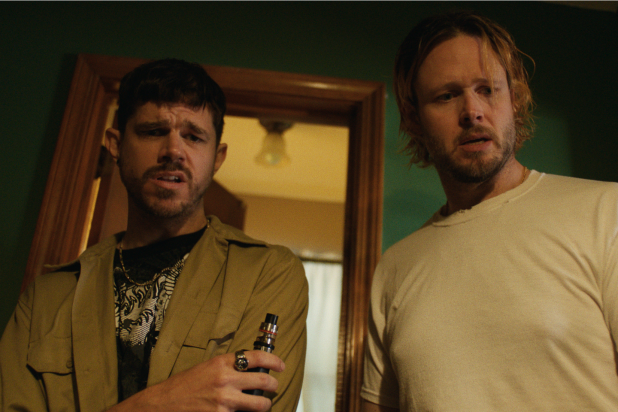 A cringe-worthy movie of Alabama backwater haplessness that could easily earn a promotional tie-in with the annual excellence-in-stupidity honors known as the Darwin Awards, “The Death of Dick Long” may be a made-up story, but inside this crisis management suspense-comedy is a weirdly down-to-earth humanity about the ripple effects of out-of-nowhere recklessness.

Native Alabamian Daniel Scheinert — one half of the directing duo the Daniels (with Daniel Kwan) — might have a tough time selling his home state’s citizens on what exactly he’s saying with screenwriter Billy Chew’s “Fargo”-esque yarn of one good ol’ boy’s very bad demise. But indie moviegoers looking for an off-road excursion likely to trigger more than a few exhortations of “oh no” — as both laughs and gasps — could turn this “Death” into something with cult life.

The titular victim (played in its brevity by Scheinert himself) is one-third of a redneck trio of garage-band bros, along with family man Zeke (Michael Abbott Jr., “Hearts Beat Loud”) and slacker Earl (Andre Hyland). One night when practicing at Zeke’s house, after their host’s loving wife Lydia (Virginia Newcomb) and daughter Cynthia (Poppy Cunningham) have gone to bed, the three take their hangout time in a different direction after Dick offers up the tantalizing suggestion, “Y’all motherf—ers want to get weird?”

One montage of drug-taking, urinating, and guns-and-fireworks revelry later, culminating in them walking into Zeke’s barn, the action cuts to a serious, dead-of-night car trip to the hospital, the barely conscious Dick severely bleeding in the backseat. Zeke and Earl unceremoniously and anonymously dump their friend on the pavement outside emergency, then return to their homes as if nothing odd happened.

The next morning, a dazed, but rallying Zeke has to hide the huge bloodstain in their car’s upholstery when his daughter needs to be taken to school, and Earl is put off enough by making lame excuses to Dick’s wife Jane (Jess Weixler, “Chained for Life”) — concerned about her husband never coming home last night — that he starts loading his truck for a planned getaway. But for now, this deluded pair of co-conspirators treat their shared secret and “missing” friend as a wait-and-see situation.

At the hospital, however, Dick dies unidentified, and is labeled a victim of a graphic assault, sparking an investigation that tests the homespun detective skills of a steely, cane-sporting sheriff (Janelle Cochran) and an eager newbie officer (Sarah Baker, “The Kominsky Method”). (More shades of “Fargo.”) They get plenty of unintended help from Zeke’s wretched skills at keeping his alibi straight and covering his tracks, which only serve to arouse suspicion at home and squeeze further this tightly wound husband and father, as we watch and wonder what possibly could have happened on that fateful night to inspire simultaneously such a hamfisted cover-up and an ever-churning fear of exposure.

The truth, when eventually confessed by Zeke to a gobsmacked Lydia, is decidedly awful and hard to walk back from, even as it retroactively explains the odd mix of disinterest in being at the hospital, and apprehension at the truth behind that night getting out. But it’s also a fascinating pivot point in Chew’s script, Scheinert’s attentive direction, and the actors’ performances, especially Abbott Jr’s and Newcomb’s nuanced marriage portrait. What started as a quizzical black comedy turns into a white-knuckle domestic brushfire of pity, anger and guilt, and yes, the continued humor of a lost man in a special hell of his own making.

Watch Video: Robert Pattinson and Willem Dafoe Bark 'What?' At Each Other Endlessly in New 'The Lighthouse' Trailer

That fine line of being neither a knee-slapper nor a straight drama isn’t always effectively handled, but it is when it counts, which is when the walls are closing in on Zeke. A nervy late-in-the-film kitchen table confab in Zeke’s home with Cochran’s and Baker’s characters is a fine example of how Paul Rogers’ nimble editing, Ashley Connor’s naturalistic rural cinematography, and the central cast’s balanced walk between what’s funny and what isn’t, can be a model of how to mine both emotional stakes and situational laughs.

And considering how easily “The Death of Dick Long” could have been turned into redneck raunch comedy, that it settles into a strangely believable and even sympathetic portrait of bad behavior’s homewrecking aftermath — and its effect on the women (and one girl) surrounding its central wayward male — is a gripping surprise. That it’s also a more low-key exploration of the same kind of male fragility that infused Scheinert’s more outlandishly style-driven Daniels calling card “Swiss Army Man” shows that he has a potentially interesting career motif on his hands when neither the humor nor the compassion is immediately obvious.