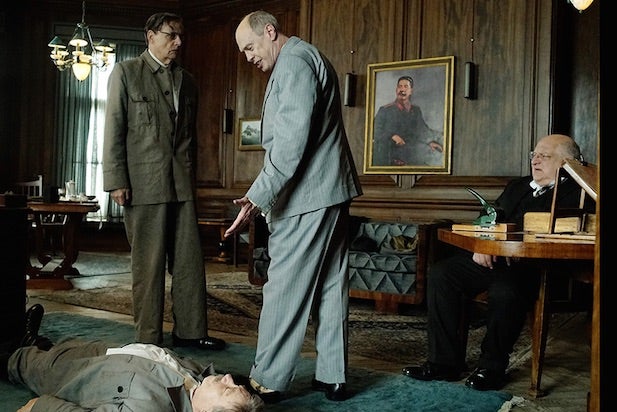 There’s a leadership vacuum at the top and the government is dominated by idiots. An inner circle full of hard-liners, misfits and preening malcontents desperately jockeys for position. And this is all coming to us from director Armando Iannucci, who previously made the barbed political farce “In the Loop” and is best known as the creator of the HBO comedy series “Veep.”

“The Death of Stalin,” which premiered on Friday at the Toronto International Film Festival, is Iannucci doing what he always does: taking a biting, profane and hilarious look at the foibles of the blowhards and nitwits in power.

The film is a departure for Iannucci, though, because of its distance from today’s politics. “The Death of Stalin” tells a twisted account of Nikita Khruschev, Georgy Malenkov and Lavrentiy Beria scrambling for power in the aftermath of the death of Joseph Stalin in March, 1953.

But if you’d like to draw some comparisons to Bannon, Kelly and Scaramucci fighting in the halls of the Trump White House in the 2010s, I’m sure Iannucci won’t mind. After all, he makes little attempt to have his actors look like the characters they’re playing (Steve Buscemi and Simon Russell Beale, who play Khruschev and Beria, respectively, would have been a lot more accurate if they’d traded roles), and absolutely no attempt to have them sound the least bit Russian.

In fact, the voices are nothing but a bold F-you to period-movie conventions: Buscemi plays Khruschev like a tough-guy New Yorker, Jeffrey Tambor is an all-American Malenkov, Michael Palin is a thoroughly British Vyacheslav Molotov and Jason Isaacs adopts a thick Scottish brogue as Georgy Zhukov, the head of the Red Army.

In other words: It might help to know a little bit about midcentury Soviet politics to be up to speed on all the details here, but this ain’t really about the USSR. It’s about us, about the incompetent leaders and sleazy toadies that occupy the halls of power everywhere.

Still, the historical setting puts Iannucci’s usual profane immediacy at a slight distance, and slows down the pace from the spitfire patter of “In the Loop,” “Veep” and his British series “The Thick of It.” (He co-wrote the screenplay with David Schneider and Ian Martin, from the graphic novel by Fabien Nury.)

“The Death of Stalin” is the master satirist working more quietly and deliberately than usual, with a buffer of 65 years between his characters and their audience. It isn’t as thrillingly transgressive as “In the Loop,” which turned streams of creative obscenities into an art form, or as relentlessly entertaining as the early seasons of “Veep” that were overseen by Iannucci. (The later, Dave Mandel-led seasons didn’t slack off, either.)

But if “The Death of Stalin” isn’t as bracing as some of Iannucci’s past work, it gives us a gallery of dopes and twits to embrace, among them the vain, timid and ineffectual Malenkov, played by the priceless Jeffrey Tambor, and Buscemi’s blunt schemer of a Khruschev, who replies to Stalin’s always-drunken son saying, “I want to make a speech at my father’s funeral” with a succinct, “And I want to f— Grace Kelly.”

Also Read: John Le Carre Thinks The Russians Have Something On Trump

Everyone here is frantic to seize an advantage, whether that means picking the right person to kill or getting your car first in line behind the truck carrying Stalin’s coffin. Some pull it off, others end up with bullets in their heads, and the details are less important than the delicious put-downs, the double crossing, the utterly Iannuccian sense that these leaders – hell, everybody’s leaders – are a bunch of dangerous buffoons.

And by the way, it suggests that if you’re looking for somebody to make a movie about the Trump administration, Armando is probably your guy.