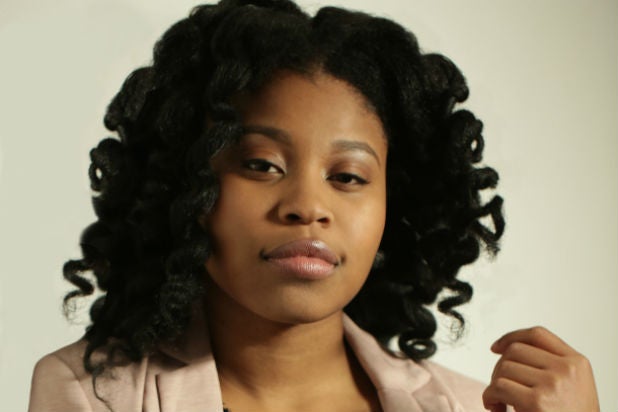 (Warning: Spoilers ahead for Sunday’s “The Deuce“)

Darlene (Dominique Fishback) is nearing a big decision about her future on “The Deuce.”

In Sunday’s episode, Darlene’s reluctance to be pushed into adult films by Larry (Gbenga Akinnagbe) becomes clear, but her final scene in the massage parlor suggests that she’s about to change her path.

“She realizes as the episodes go on that she has more power than she ever thought she did, especially with her relationship with Larry,” Fishback told TheWrap. “It’s assumed that because he’s the male, and he’s physically stronger, he has the power. But every time she was honest with him, she was able to talk him down and not allow him to hurt anyone around her, which is such a powerful tool to have as a young woman.”

Also Read: How HBO's 'The Deuce' Avoids Crossing the Line Into Sexual Exploitation

“They’ve realized that they’ve become invalid,” the “Show Me a Hero” alum said. “They’re just grabbing onto whatever they can, and Larry does that to Darlene.”

Last week, Darlene returned from her hometown with Bernice (Andrea-Rachel Parker) in tow to hit the streets. According to Fishback, Darlene is doing what she feels she needs to do in order to protect herself and Abby (Margarita Levieva).

“The way I have to view Darlene is that I don’t think any of her choices are questionable because I don’t think that she thinks that, and so I can’t judge the choices that she makes because she’s doing it for a reason,” the actress said. “She still has good intentions, even though they may be questionable to people outside.”

Fishback acknowledges that the show’s themes remain relevant given recent headlines about the treatment of women, not to mention concerns about women’s rights in the Trump era.

“I think history repeats itself,” she said of the 1970s-set show commenting on today. “I love all the different ideas and different perspectives that people can take from the show because that’s what art is about.”

Also Read: Sarah Silverman on Joking About Rape: 'I'm Having a Hard Time Navigating It'

With only two episodes remaining in the season, there’s a big twist looming for Darlene.

“I think people will be very surprised about the finale and where Darlene ends up,” she said. “[Before reading the finale,] I was concerned — I’m thinking, ‘What are they going do? All these people can’t all go toward this direction.’ But there are so many avenues that they can take and they will take with these different people, so I’m just as excited as everybody to know where it goes.”