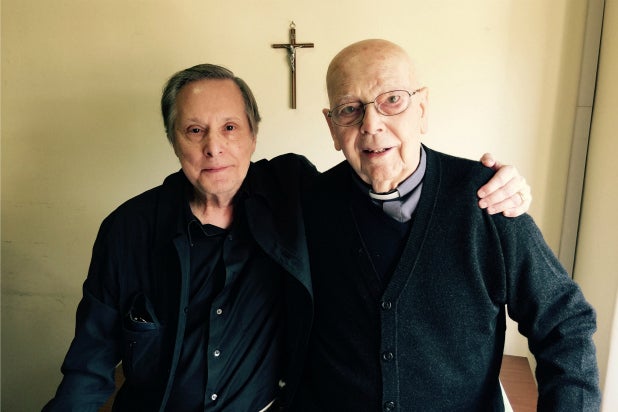 You have to believe in the devil to be possessed by the devil, William Friedkin’s new documentary suggests, and you certainly have to believe in demonic possession to swallow “The Devil and Father Amorth,” an attempt by the director of “The Exorcist” to capture a real-life, honest-to-gosh, no-foolin’ exorcism on film.

It’s understandable why Friedkin would remain fascinated with a subject that fueled his genre-changing hit, but the results have all the impact (not to mention production values) of a low-budget conspiracy doc. Even a great director can go a bit astray when he tackles a subject about which he already seems to have made up his mind, and most of this movie, despite Friedkin’s early background as a maker of TV docs, smacks of confirmation bias.

Friedkin tells us — literally; his voice narrates many of the moments in which he’s not physically on camera — about the fact that some 500,000 Italians have undergone an exorcism, and that the granddaddy practitioner is one Father Amorth. You can guess which movie is the cleric’s favorite (although he found the special effects to be slightly overdone), and after Friedkin interviewed him for a magazine article, the director asked if he might be able to film an exorcism.

Amorth agrees, allowing Friedkin (with no crew, no lights, and a simple hand-held camera) to shoot the ninth exorcism of Cristina, a female architect from a small town 200 kilometers from Rome. (One hopes that after the tenth, she gets a free sub sandwich.) After a great deal of build-up — including two interviews with the late William Peter Blatty, who wrote the novel and the screenplay of “The Exorcist” — we get down to business, with the woman sitting in a chair as Father Amorth prays over her.

And then: well, pretty much what you’d expect. Cristina thrashes, she grinds her teeth, she yells a lot. And then things calm down, and everyone agrees that surely this time, she’s cured. Only when Father Amorth starts blessing the woman’s parents, out come the voices and the thrashing again.

If you don’t believe in this stuff, then the film is exploiting a young woman with mental issues. And if you do believe, it’s hard not to question the devil’s strategy. Why possess a small-town architect and not someone with a little more clout or influence? Why do those possessed almost always seems to be people raised to believe in the devil’s existence in the first place? And why, after all these centuries, not to mention the 45 years or so since the filming of “The Exorcist,” doesn’t the Prince of Darkness figure out a more priest-proof way of doing his dreadful deeds?

Exorcism movies have long been great infomercials for the Catholic Church; when’s the last time you saw a Presbyterian or a Unitarian-Universalist battle the Dark Lord to a standstill? “The Devil and Father Amorth” never reaches a fraction of the impact of Friedkin’s “The Exorcist,” but he narrates with an overly straight face that calls to mind Robert Stack’s no-nonsense voiceovers on “Unsolved Mysteries.” The credibility of his premise isn’t helped by the non-existent production values; this 68-minute feature is so on-the-fly in terms of lighting and so excessively earnest in its presentation that it initially seems like Friedkin is doing some sort of found-footage narrative (or parody, even). Such is not the case.

After the exorcism, we get some interviews with neurologists, psychiatrists and a Catholic bishop, none of whom are rude enough to call shenanigans to Friedkin’s face; instead, they collectively shrug their shoulders and say, sure, there are forces we can’t understand. Friedkin seems determined to get the one answer he wants, but he settles for what he gets. The shrinks, at least, do their best to offer up an actual diagnosis that relies more on observed science than the paranormal.

Even audiences on the fence may lose their open-mindedness in the film’s final minutes, in which Friedkin recounts a subsequent encounter with the still-possessed Cristina, who threatens to murder him and his family if he doesn’t hand over the footage. For this part, wouldn’t you know it, Friedkin’s camera wasn’t on, and we have to rely up on his description of events.

It’s all a little hard to swallow, even coming from one of the great living American directors. If you watch only one William Friedkin movie about demonic possession, watch the other one.