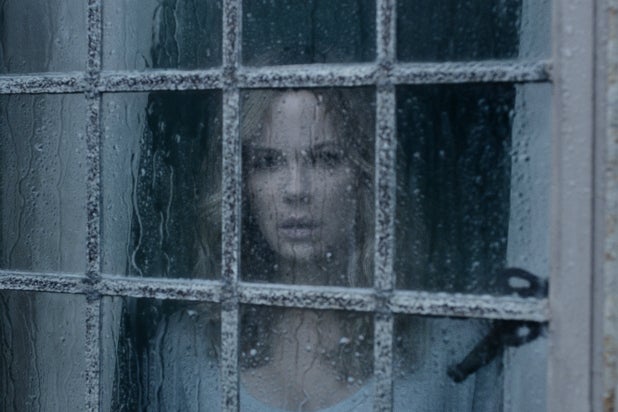 Named as if it knew its destiny, “The Disappointments Room” brings together those horror movie standbys that just can’t quit each other — a creepy old home and a troubled family — for some truly convoluted, non-scary, and execrable psychological mishegoss surrounding a hidden chamber and the noxious historical shame it holds.

In this case, the whole movie is a litany of embarrassments best left shielded from audiences, who would be better off watching “The Haunting” or “The Shining” for the 17th time instead. Or even just their trailers.

Director DJ Caruso (“Suburbia”) and screenwriter Wentworth Miller (“Stoker”) have plenty to answer for here. First: why do architect Dana (Kate Beckinsale), her husband David (Mel Raido, “Legend”), and their five-year-old son Lucas (Duncan Joiner, “The Perfect Guy”) — a family supposedly in need of a new beginning since their infant daughter died — move into run-down, leaky, light-challenged, secluded country mansion in the dead of a rainy night? Especially a mansion referred to as “the Blacker house”?

Arrival timing aside, the dilapidated Tudor Revival represents a repair project for emotionally fragile mommy, who attacks it with gusto, even as the new home appears to be in its own form of assault mode. Dana begins having blood-soaked dreams involving Lucas, she imagines a growling creature rumbles in the bushes, and she believes something might be in the attic, judging from the light she notices going on in the window.

Investigating, Dana finds a lone armoire, and behind that a door that can only be locked from the outside, leading to a secret space with a metal floor, scratches and splotches everywhere, and a drain. (It has that round window overlooking the property, though, so how secret can this room be?)

Dana’s nightmarish visions begin to include a severe-looking, black-suited Gerald McRaney with an attack dog, and a pale young girl in a sickly yellow dress whispering, “He doesn’t want you here.” No one can call these ghosts passive-aggressive.

Though Dana’s flushing of her mood-stabilizing pills warrants concern, she has the wherewithal to dig deeper into the Blacker family history, learning from an older, kind-faced townswoman named Ms. Judith (Marcia Derousse) that a previous generation’s malevolent humiliation had a corresponding real-estate designation: the disappointments room, where offspring with “certain difficulties” — read: physical deformities — were kept unseen from polite society. Leaving nothing about the explanation of this mystery to chance, when Ms. Judith continues by saying “These children …” Dana clarifies, “Disappointments?”

Up until now, the dreary adherence to haunted-house narrative schematics has been pretty routine, save the occasionally atmospheric contributions of cinematographer Rogier Stoffers (“The Vow”). But in the second half, the movie, like Dana, stops taking its meds, and becomes nearly incoherent about its purpose. Intending to tie a prior family’s lunatic evil to a stricken mom’s cracking mind (tediously literalized when Dana actually shatters a mirror), Caruso shows no flair for where the trappings of horror and the realities of psychotic breaks create genuine tension.

(Great Moments in “Otherwise, There’d Be No Movie”: Joely Fisher’s New York therapist telling an increasingly worried David that maybe, for his troubled wife, being in such a big house is too isolating.)

The charitable thing to say about Beckinsale is that her rarely-mussed, glam-frosty, casual chic demeanor simply isn’t right for the part. To be fair, a few of Dana’s scenes seem beyond any actor’s resonating abilities, like the one in which she flirtatiously shares a cigarette with a strapping, forward young handyman (Lucas Till), whose presence is inexplicable, unless you need non-sexual tension with your non-chills.

But at a certain point, the star’s lack of chemistry with anyone becomes a liability, leading to a poorly written, knife-wielding, cake-flipping dinner party meltdown that calls to mind “Real Housewives” tantrums more than believable domestic discord. (Much like his counterparts in that reality horror-show franchise, Raido is an eminently forgettable husband.)

The climax, a terribly conceived child endangerment sequence that fuses blecchy, hammer-induced gore and a mother’s devastating grief for dumb, obvious thrills, leaves the very worst aftertaste after an already tough swallow. Stuff “The Disappointments Room” in The Flops Box.