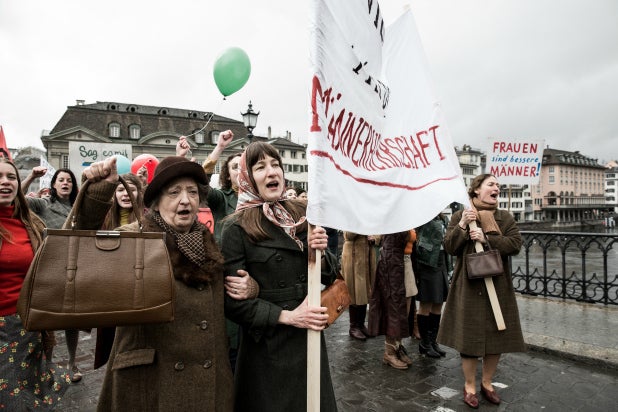 At a time when the news cycle feels like a daily reminder of how bad things are, “The Divine Order” provides a welcome reminder that at the very least, they’re better than they used to be. With Switzerland’s selection for the Academy Award for Best Foreign Film, writer-director Petra Biondina Volpe skillfully balances the personal and political in a spirited, rousing chronicle of Switzerland’s women’s suffrage movement, filtered through the experiences of a handful of locals who are tired of being marginalized even — or maybe especially — in their small village.

The year is 1971: Marie Leuenberger (“The Circle”) plays Nora, a housewife and mother who doesn’t realize quite how unhappy she is in domesticity until her husband Hans (Maximilian Simonischek) forbids her from getting a part-time job. Equally frustrated that her sister-in-law Theresa (Rachel Braunschweig) lacks the legal authority to protect her own daughter Hanna (Ella Rumpf, “Raw”) from her spouse’s draconian punishments, Nora begins to research Swiss law, if only as a means to further discover what aspects of their lives their spouses control.

But when an elderly neighbor Vroni (Sibylle Brunner) commits her to joining and eventually leading the local women’s suffrage movement, Nora finds her reputation tarnished, and her relationships with family and friends alike in disarray.

Before long, Nora, Theresa and Vroni befriend an irreverent Italian woman named Graziella (Marta Zoffoli), who offers her restaurant as a home base for their efforts, and together they organize a “strike” that leaves men cooking and cleaning for themselves. But when a struggling Hans offers her an ultimatum — their marriage, or the movement — Nora is forced to consider if the lifestyle she and her comrades left behind is compatible with, or mutually exclusive from, the equality for which they fight.

Thoughtfully introducing Nora’s story from the context of the U.S. counterculture movement of the 1960s lends much-needed perspective to the situation for women in Switzerland, but it also speaks to where her attentions and here eventual aspirations were directed: namely, toward the glamorous, cosmopolitan world she didn’t see reflected in the provincial landscape of her village.

Nora is a reticent crusader, and even more reluctant to become the face of the local movement; but she quickly recognizes not just how the status quo impacts her own ambitions but also the needs and opportunities of her female neighbors and friends, who each struggle with their own male-driven problems. Volpe’s specificity with each characterization, including many of the men, humanizes what would otherwise be an issue-driven movie, and lends it an immediacy and resonance that fuels audience sympathies, not to mention understanding.

As Nora, Leuenberger has a wonderfully inscrutable face that makes the character’s inner turmoil that much more palpable, especially once she finds herself caught between the increasing responsibility of leading this grassroots movement and the instinct to reconcile with Hans. He, in turn, is no thoughtless clod but rather a well-meaning husband who’s perhaps slightly too influenced by his father’s entitled sexism.

Leuenberger exposes the character’s developing social consciousness as at once irrepressible and unwieldy, allowing herself both to enjoy moments of empowerment and to experience the hesitation and even occasional regret that occurs when she realizes how her good feeling complicates the lives of the people around her. Meanwhile, and somewhat thanklessly, Simonischek complements her beautifully on screen, breathing life into Hans’ own burgeoning progressivism as he clearly loves, respects and wants to be a good partner to Nora but remains woefully susceptible to the disapproval from a community, and heritage, steeped in chauvinistic attitudes.

Volpe’s work isn’t especially well-known outside Switzerland, but her light touch with even the weightiest dramatic material should earn her greater attention going forward; the film has the same effortless proficiency, and inspirational sweep, as Angela Robinson’s “Professor Marston and the Wonder Women,” another film about powerful women defining their own identities (and redefining the world around them in the process), much less something like “Hidden Figures” did last year.

As a brisk, empowering history lesson or a more intimate snapshot of a person who learns it’s OK to say “I do now” when someone challenges the newness of her cosmopolitan viewpoint, “The Divine Order” crucially underscores how personal experiences almost always help shape, and drive, larger political movements, and how progress isn’t a zero-sum game of continuous woke-ness, but a journey that sometimes drags its champions along with it, whether they’re ready or not.