The Democratic Convention is not a super pleasant place to be right now.

It’s packed inside the Wells Fargo Center in Philadelpha, and hungry people are waiting in long lines for barbecue or sausages, just like they would at a Flyers hockey game. People on the floor keep chanting “Bernie” even though he’s not the nominee.

It’s raining so hard that the media tent is leaking. A woman comes around every few minutes to switch buckets, while reporters (OK, me) joke on Instagram about “media leaks.”

If Hillary Clinton’s convention were a movie, this would be one of the scenes where things look pretty dark.

The weather outside is Ghostbusters. Everyone who takes the podium is shouty. The temperature was in the ’90s earlier, so it’s a safe bet that literally no one came prepared.

And the Fart-In hasn’t even started. Things may get worse before they get better.

And that could be good for Clinton. Like I wrote earlier, she’s been haunted for years with taunts that she expected to be coronated. She needs a narrative in which she overcomes something.

And now, between the DNC leaks, Democratic National Committee chairwoman Debbie Wasserman Schultz resigning on conventio, and the constant barrage of Bernie pride, she has plenty to overcome.

Because there are also good things about the convention: First, it’s truly diverse. There are gender-neutral bathrooms, something you wouldn’t see at the Republican National Convention. And it feels like a place of genuine debate, and dueling ideas and tactics. It may not be tidy, but it’s real. 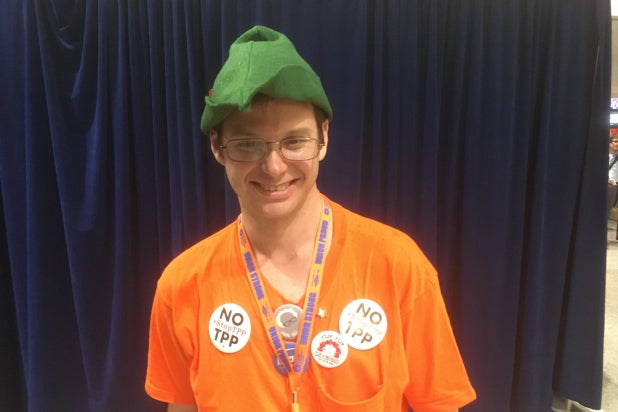 The party is allowing, intentionally or not, for a wide range of voices to be heard. I just asked Cory Douglas, a 40-year-old electrical engineer from Metropolis, Illinois — “where Superman is from,” he said, but it’s a real place — why he was wearing a little green hat with a feather. He told me it represented Robin Hood, reallocating wealth from the rich to the poor.

That’s a pretty revolutionary idea for a mainstream political convention, isn’t it? And Douglas said he’s in the Illinois delegation. And that he thinks Sanders, his preferred candidate, might still win the nomination yet.

Give the Democrats credit. They have a big tent, even if it’s leaking.