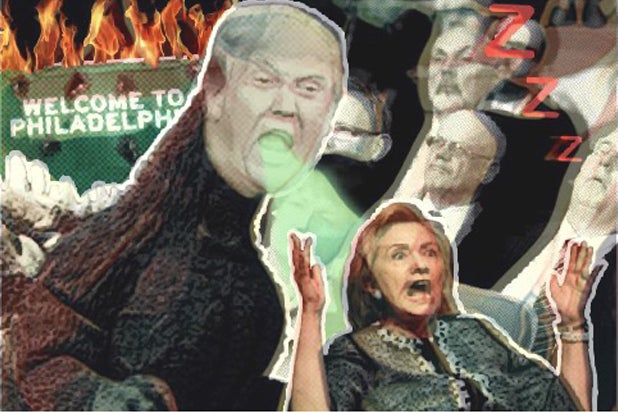 Say this for the Republican National Convention: It had drama. Melania Trump plagiarized the woman she’s trying to replace. Ted Cruz revolted. No one knew for sure that Trump would really get the nomination until the moment he got it. And Trump smiled through it all, a quality Americans like in a president. He refuses to get thrown off his game, even if his game is ridiculous.

No one wants to watch a story in which the ending feels inevitable. Hillary Clinton has been taunted for a decade with criticisms that she sees the presidential race not as a competition, but as a coronation. So she needs a convention that says she doesn’t take anything for granted, and that she can handle any indignity thrown her way. A small group of Bernie Sanders supporters — and their digestive systems — are happy to oblige.

Here are three things that could ruin the convention.

1. A Fart-In. It’s just like a 1960s Sit-In or a Be-In, except it’s disgusting. Bernie Sanders supporters tell Time they’re planning to pass large amounts of gas inside the convention hall as a form of protest. There are lots of questions here: Would it be a formal event, to the extent that a lot of farting can be formal? Or will it be freelance and spontaneous? Given Philadelphia’s ample supply of cheesesteaks, this is a protest that could quickly get out of hand.

Fortunately for Clinton, television is a visual medium, and viewers at home won’t be able to smell inside the hall. As long as everyone avoids making faces, maybe Clinton supporters will be able to hold their breath and pretend everything is fine, just like Thanksgiving.

An interesting side note: Some people credit the fart-in concept to writer and political organizer Saul Alinsky. Ben Carson tried to use Alinsky to link Hillary Clinton to the devil himself when he noted at the Republican National Convention that Clinton wrote her senior thesis about Alinsky and that in his book “Rules for Radicals” Alinksy namechecked Lucifer, “the original radical.”

Carson dubiously said Alinsky was one of Clinton’s “heroes,” so it would be ironic if one of his (revolting) techniques was used against her. A fart-in does sound like something the devil would think of, however. Let’s pray against sulfuric smells from hell.

2. Bill. The former president sparred with Black Lives Matter demonstrators in April, in Philadelphia, no less. So he might seem like an odd choice to take a starring role in what is essential the Black Lives Matter segment of the Democratic National Convention. Bill Clinton will be joined by mothers of black men and women who have been killed by gun violence or in police custody.

But… why him? Is he the best spokesman for the cause, or is this an attempt at image rehabilitation for the man Toni Morrison called “the first black president”? (It was a more complicated compliment/critique than people realized at the time.)

3. Nothing goes wrong. You need something to go wrong so Hillary Clinton can demonstrate her resilience and ability to roll with adversity. She’s made the case that she’s already weathered a lot, between her husband’s infidelities, her husband’s infidelities being spun into attacks on her, Whitewater, Vince Foster, and modern-day debates like Benghazi and her e-mail server.

But most of those indignities didn’t lend themselves to soundbites, memes, or moments. Most have been annoying drip-drip-drip scandals, as frustrating for their inconclusiveness as for our inability to understand what they’re exactly about. (Quick, without Googling: What was the issue with the White House travel office?)

Viewers like fighters. Even Cersei Lannister got some sympathy after she endured that walk of shame. Hillary Clinton needs to make the case that she doesn’t see the presidency as her rightful inheritance, but rather as something she’s fought for and earned — not for herself, but for the real people she wants to help. A too-smooth convention won’t help her make that case. She needs drama, and she needs to overcome it.

Here’s an example. In the very close 2000 election, I watched Al Gore deliver his stump speech at a union meeting in Pittsburgh. Suddenly, a man collapsed. An ambulance pulled up. As a terrible public speaker myself, I immediately sympathized — not just with the man, but also with Gore. What was he supposed to do as we waited for the stretcher? Wait? Just stand there looking helpless?

No. Gore led a prayer. I remember that it included words to the effect of, “Lord: We know that you hold us in the palm of your hand.” He asked God to protect the fallen man, and all of us. It was sensitive, humble, and perfect.

No one remembered, in that election in which George W. Bush was supposed to be the Christian candidate, that Gore had gone to divinity school. I don’t think anyone reported on what happened that day, or how sensitively Gore had handled the moment. No one had anywhere to post a video or 140 characters.

But now they do. We all do. And I’m not saying I want anyone to collapse at the DNC — certainly not from holding his breath through a Fart-In.

But if anyone does fall, Hillary Clinton should be ready with a prayer.