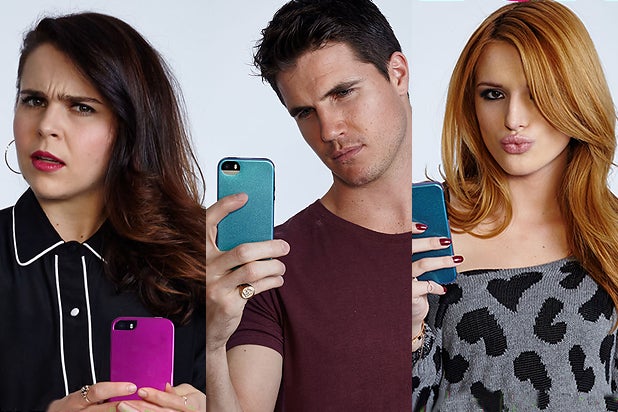 In one clever scene of CBS Films’ new movie “The DUFF,” a character “breaks up” with her best friends by unfriending, unfollowing and disconnecting their Twitters, Facebooks, Tumblrs and other various accounts.

Social media is entwined into the very DNA of the film, often being used to nefarious ends — like sending an embarrassing video viral and spreading malicious gossip.

But outside the movie, these various platforms are being employed as increasingly important tools in the advancement of young stars’ careers — and the films in which they appear, blurring the line between performer and marketer.

“We’re now getting to a stage where a lot of these actors are publishers,” says Richard Janes, whose company GoGoGab pairs stars and sponsors for live chat sessions with fans during TV show broadcasts. “Some of these actors now are committing a lot to build up these followings, so there is a question of are they being compensated for that, for example, next to three other actors on the project who aren’t doing anything?”

“The DUFF’s” promotion over the past few months, occupying a murky gray area between regimented traditional campaign and more organic, cast-driven social media outreach, comes at a time when social marketing is rapidly becoming more and more instrumental to a project’s financial success — particularly youth-targeted films and TV shows.

Marketing for the film has incorporated social media in even its most traditional campaigns: actors are credited using their Twitter accounts, both onscreen and off; an official poster from the film is covered in selfies that were taken by fans in “DUFF”-themed photo stations at participating AMC Theaters, appearing alongside stars Mae Whitman, Robbie Amell and Bella Thorne.

And then there are the more informal promo sessions, such as the one Amell and Whitman conducted with Amell’s equally famous cousin, “Arrow” star Stephen Amell, a well-recognized social media whiz who posts weekly videos on his three-million-strong Facebook page. The stars, who came up with the idea for the session themselves, all took to social media to solicit questions beforehand, shooting a 20-minute video that ultimately racked up more than half a million views.

This kind of promotion isn’t a completely new concept, of course.

“Some of the best marketing is word of mouth,” said Janes. “It’s you hearing from someone you trust ‘this movie’s great, here’s something fun,’ and social media is one of the closest ways we can get to that. That’s where it gets really interesting with actors, because they’re not a billboard, they’re a person, and they’re a person their fans want to support, especially if they’ve been conditioned to support them.”

Thorne, for her part, has the biggest social media presence of all the cast. She’s amassed over five million Twitter followers and nearly nine million fans on Facebook. On Twitter, she keeps her fans close by directly tweeting with or retweeting from their accounts, while her Facebook page is a balanced mix of posts promoting her new movie and personal photos. But for all of this free promotion, a reckoning at the studios may be due.

“If you worked with Oprah Winfrey, would you presume she’s going to advertise whatever you’re working on together all over the pages of her magazine or TV show? The answer is probably not. You realize they’re separate entities,” Janes said.

To Janes’ point, while there aren’t yet any industry-wide standards for the inclusion of social media promotion in actors’ contracts, one insider notes that some studios and networks have begun inserting general language that outlines “best efforts” to promote a film.

From a marketing perspective, however, Thorne and “The DUFF” are still anomalies. While TV stars and networks seem to have streamlined the process, embracing such social media promotional tactics as live-tweeting their shows every week, movies are still playing catchup.

“The movies haven’t really been able to sort out their models when it comes to social media and really deploying the actors,” said Janes, who referenced the recent backlash surrounding leaked Sony Pictures e-mails, which laid bare a battle between the studio and actor Kevin Hart over whether he should be compensated for tweeting out promotion for “The Wedding Ringer.”

Data hasn’t yet shown a direct correlation between social media awareness and box office returns, but it’s not stopping CBS Films and other studios from exploring their options fully in finding new ways to market their films via social media.

Chiefly, the studio made a priority of incorporating Snapchat into “The DUFF’s” marketing. The fledgling social media platform allows users to send images or 10-second video clips which disappear soon thereafter. The cast has since recorded a series of short videos and Thorne even participated in an Ask Me Anything (AMA), another form of social media engagement lifted from Reddit, on the app.

CBS placed the account in the hands of Mike Platco, a pioneer of the rapidly growing app. He’s turned a volunteer gig creating the Snapchat page for a “Harry Potter” fan site into a full-time independent consultancy, with clients like ABC Family’s “Pretty Little Liars,” Marriott Hotels and GrubHub.

The app resonates squarely with the film’s target demographic: teenage girls. Snapchat was also recently crowned the fastest growing mobile app with a reported 100 million active monthly users. Of those users, 71 percent are said to be under 25 years old.

“The number one thing Snapchat brings to a brand in terms of marketing is a direct connection to something nothing else can guarantee: and that’s attention,” said Platco, “the entire attention span of your target audience. When you receive a snap from someone or you look at a snap on someone’s story, that is all you’re doing. You can’t look at two at once, you can’t have anything else going on on your phone, you need to hold your thumb down and dedicate the time to paying every bit of attention to this image or this video.”

Not surprisingly, Thorne already has her own public account to connect with fans.