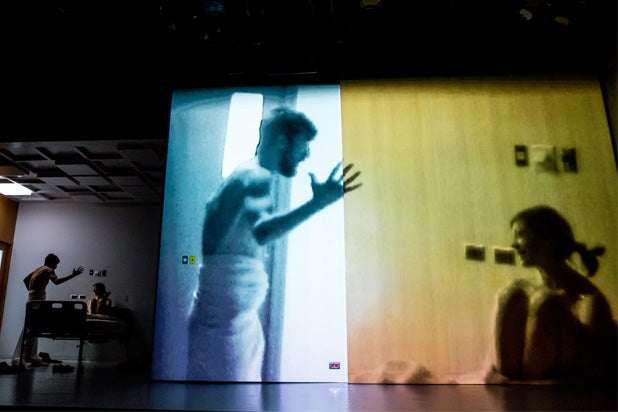 Lucy Prebble‘s “The Effect,” which opened Sunday at the Barrow Street Theatre, is half good. Unfortunately, it’s the wrong half. This sci-fi thriller about a young couple (Susannah Flood and Carter Hudson) who undergo an experimental regimen of antidepressant drugs begins strong, then shifts focus in the second act to a much less interesting couple, the doctors (Kati Brazda and Steve Key) who administer and oversee the program.

The doctors don’t have a lot to do in the first act. It’s obvious that they’ve known each other for a long time. She has a cigarette burn on her leg that he caused years ago. A burnt-out romance is suggested. This backstory is clumsily delivered, but we ignore the interruption because the drugged-up young lovers are so intriguing.

Prebble’s dialogue for young Connie and Tristan is cracker-jack sharp from the moment we meet them. They’re being interviewed for their participation in what looks to be a very intense kind of drug therapy — so intense that they’ll be living in relative isolation for weeks while under observation and wired up to hospital computers.

They’re absolutely forbidden from having sex and, of course, they do. Flood and Hudson give superb performances that crackle with all sorts of flapping loose ends even before their characters meet. She’s a bundle of insecurities. He’s recklessly gung-ho. It’s obvious that their lives outside the lab/hospital are a mess, but for very different reasons.

The opening night for “The Effect” was delayed a few days due to technical reasons. Indeed, the physical side of the production is stunning and complicated in its mix of the eerie and the sterile.

Director David Cromer builds the suspense up to a prolonged but elliptical sex scene that’s duplicated through video projections. What will Act 2 deliver? I was expecting something along the lines of Geena Davis‘ nightmare birth of a big larva from “The Fly.” Remember, Connie is warned not to have sex due to all the drugs she’s taking.

Prebble, who made her Broadway debut in 2010 with the very grand and the very empty “Enron,” which quickly shuttered, likes big ideas. Before “The Effect” becomes more about the two doctors than the two patients, one of the doctors gives Connie a piece of crucial information regarding the drug program. It’s a shocker. It’s also a piece of information that this doctor, as we’ve come to know her, would never reveal to a patient. It’s beyond unethical.

But that isn’t Prebble’s point. She just needs to move the story line, so she drops a bomb that is totally out of character for the doctor. Actually, the two doctors can’t stop revealing all sorts of things about the drug program and themselves and their own contrarian views on such therapy. Much of it is not drama. It’s just speeches, one after the other.

One doctor even begins to sound a lot like Tom Cruise. Remember when the movie star went off on Brooke Shields years ago because she treated her postpartum depression with drugs? That’s where Prebble takes “The Effect.”