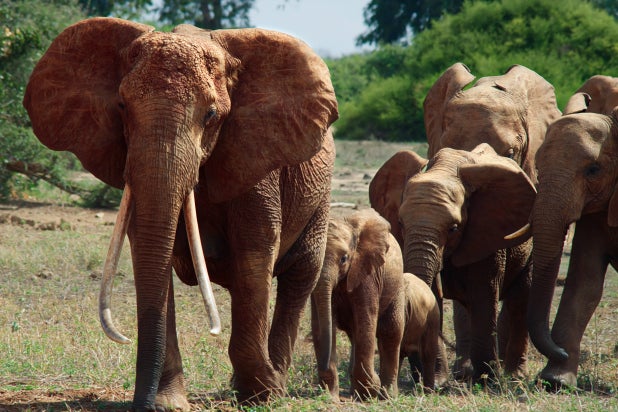 It’s heartening to see a contemporary nature documentary that’s pitched more at children than adult viewers, let alone a children’s movie that will probably leave younger viewers with innocent questions that are best fielded by parents. The Apple TV+-distributed pachyderm doc, “The Elephant Queen,” isn’t as tonally stable, nor as thematically cogent as it could have been, but it does feature some child-appropriate scenes of animals relieving themselves, having sex, and even dying.

So while some parents might not want to drop their kids off in front of the TV and come back 96 minutes later, the rest can rest easy knowing that Peabody Award-winning co-directors Mark Deeble (who’s also credited as writer) and Victoria Stone do a fine job of removing the sting from any potentially shocking scenes where wild animals do what they should be expected to do in nature.

“The Elephant Queen” is not a radical departure from the tradition of kid-friendly nature docs that Disney established in the 1950s and have kept alive in more recent years (with mixed, but mostly positive results). The film mostly follows Athena, a 50-year-old East African elephant, as she tries to lead a predominantly female group of elephants through an especially dry season.

Deeble and Stone explain, partly through voiceover narration (spoken by Chiwetel Ejiofor), how Athena’s group is part of a community of animals, including big-shelled tortoises, mid-sized foaming frogs, and tiny killifish. These animals provide context for scenes that, out of context, might seem juvenile or disturbing for children, like the death of a young elephant calf, or when an adult elephant releases a coconut-sized ball of feces.

Also Read: 'For All Mankind' Gets Early Season 2 Renewal at Apple TV+

The representative footage of amphibian sex is pretty chaste though, as is a scene where one tortoise humps another, filmed largely in close-ups of the male turtle’s face as he grunts repeatedly, with his mouth wide open, while happy flute music trills in the background.

Bodily-fluid-centric scenes like this are played mostly for laughs, like when a group of dung beetles fight over the above-mentioned ball of elephant waste, accompanied by a zany orchestral score (composed by Alex Heffes, “Queen of Katwe”), cartoon-y kicking and punching sound effects, and even a little “Angry Birds”-style gibberish dialogue.

Not all of these jokes land, but it’s nice to see nature documentarians try to demystify the Circle of Life — though, again, I doubt that most child viewers will pay too much attention to Ejiofor’s narration when he explains that, as far as elephant dung goes, “what goes in, must come out.” Poop is poop; if your kids don’t get that yet, a nature documentary probably isn’t going to help much.

More importantly, Deeble and Stone make the death of Mimi — one of two featured elephant calves, along with young WeiWei — seem like an emotionally devastating but inevitable event. The discovery of Mimi’s body is handled with enough care to transcend the scene’s upsetting nature, not to mention some cloying voiceover narration. (“But in the end, Mimi’s tiny heart can take her no further.”) A couple of white butterflies flit around the dead calf’s feet while her older sister, Mala, tries to revive her dead sibling. It’s a tough scene to watch, but there’s enough non-sensational footage here to make Mimi’s death more tolerable.

There are also some helpful follow-up scenes to orient younger viewers, like the one where WeiWei (who, we are told, is close enough to Mimi to be her brother, and is also said to be upset by her death) is shown splashing around in a pool of muddy water, looking happy “for the first time” after Mimi’s death. Life goes on in “The Elephant Queen,” and not always in a perfunctory or saccharine way.

The worst thing that can be said about “The Elephant Queen” is that its creators don’t even try to explain how human poachers figure into the life and death of Athena and the rest of her endangered group. Then again, viewers will probably only notice a lack of poachers during a concluding dedication to Satao, a large male elephant who was “killed by poachers.” (The movie is also dedicated to Athena, who was mysteriously “last seen leading her family away from the kingdom”.)

Even these omissions feel like a telling sign of the good-natured tone that Deeble and Stone establish throughout their mostly charming doc. “The Elephant Queen” may not suit every adult viewers’ taste, but it is exceptionally sensitive and consistently thoughtful, especially when it’s concerned with the sorts of facts of life of which younger kids are probably already vaguely aware.