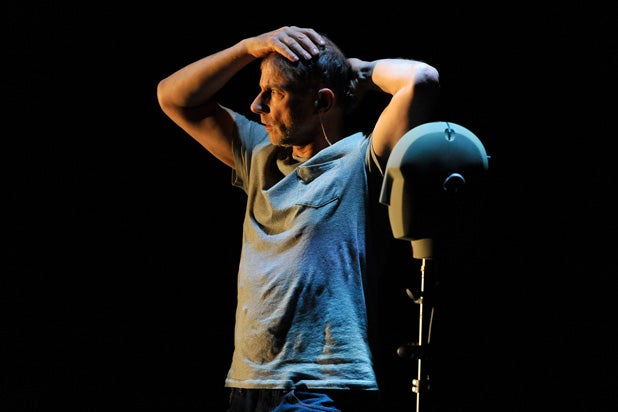 Complicite theater company’s Simon McBurney replicates the experience of making contact with a lost tribe in the Amazon by offering what’s arguably the most technology-dependent show ever seen on Broadway.

“The Encounter,” which opened Thursday at the Golden Theatre, requires us to put on a special headset, and the show begins with a sound check to see that you’re wearing it properly.

Also Read: 'All the Ways to Say I Love You' Theater Review: Sex, Lies and Neil LaBute's Big Paddle

But then prerecorded tapes quickly turn “The Encounter” into a concerto of sorts (15 voices are credited), with McBurney as the soloist who constantly switches instruments: As narrator and host, he’s his very British self (a tenor) and at other moments, he impersonates the late National Geographic photographer Loren McIntyre (a baritone), who not only documented the lost Mayoruna tribe (and got very lost in the process) but went on to visit the extremely remote source of the Amazon River.

Although “The Encounter” is credited as “inspired by the book ‘Amazon Beaming’ by Petru Popescu,” it is actually a very faithful, condensed version of that 1991 nonfiction book. Not covered in the stage work is the book’s conclusion: McIntyre’s subsequent, harrowing trip to Mismi, the lake he thought to be the source of the Amazon; a later expedition named the Mantaro River as that source.

McBurney adds other journeys. The Romanian-accented voice of Popescu tells us of his interviews and collaborations with McIntyre. Much more significant, McBurney is often interrupted by the voice of his young daughter, who wants him to come home to London.

Neither “The Encounter” nor “Amazing Beaming” have terribly profound things to say about time (it’s a continuum, not linear) or man’s place in nature (unlike other living things, man has a sense of time).

But McBurney’s conversations with his daughter beautifully illustrate the fractured, if not fractious, quality of time and place. “The Encounter” also easily trumps the book’s ability to convey the concept of beaming. McIntyre doesn’t speak the Mayorunan language, but learns to hear what the chief wants him to know.

Those very stereophonic headsets make beaming abundantly clear in ways that a book never can, even though it’s fairly obvious that McIntyre is simply stoned on what the Mayorunans have been feeding him. Also, McBurney, a most engagingly relaxed performer, delivers big when he turns himself into wild beasts while experiencing oneness with the forest.

It’s quite a show, both visually and aurally, and it made me dread a little less the day I have to wear a special headset to enjoy the theater.