“The Essex Serpent” kicked off last week with a two-episode debut, following the Victorian Era-set story of Claire Danes’ Cora Seaborne, who moves to the English countryside only to find there is something in the waters there.

The townspeople are convinced a creature swims in their murky waters, despite the protestations of Will Ransome (Tom Hiddleston), the local pastor.

In TheWrap’s exclusive sneak peek from Episode 3, Frank Dillane’s character, Dr. Luke Garrett, makes a visit to Essex to see his friend Cora, where he encounters a girl who thinks she may be the reason horrific things are happening in the community. And it’s down to Dr. Garrett to try and unravel the mystery. 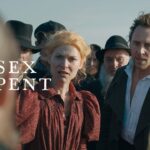 Also Read:
Tom Hiddleston and Claire Danes’ ‘The Essex Serpent’ Trailer Hints Something Is Out There (Video)

“I guess the main thing that I wanted to keep in mind when portraying Luke was that this idea of surgeons being very well educated and monied people back in those days was not necessarily true,” he said. “That just prior to this, a lot of surgeons were just people like butchers and hairdressers. Anyone with a knife, really, could do surgery. And also, to put it in context, there was a time just previous to this – about 50 years or something – where the bug catcher in the hospital was paid more than the surgeon. So it was not this glamorous profession to begin with. Although in the Victorian period, in the time we meet Luke, it is kind of becoming that, and certainly is that now. … But I wanted to keep a sort of feeling of a kind of roughness to Luke and not be too much part of the club.”

“The Essex Serpent” stars Danes, Hiddleston, Clémence Poésy, Dillane, Hayley Squires and Jamael Westman. Anna Symon is the show’s executive producer and writer. Clio Barnard is an EP and the director. Other EPs are Hakan Kousetta and Jamie Laurenson. Sarah Perry wrote the book that the story is based on.

New episodes of the series roll out Fridays through June 10.