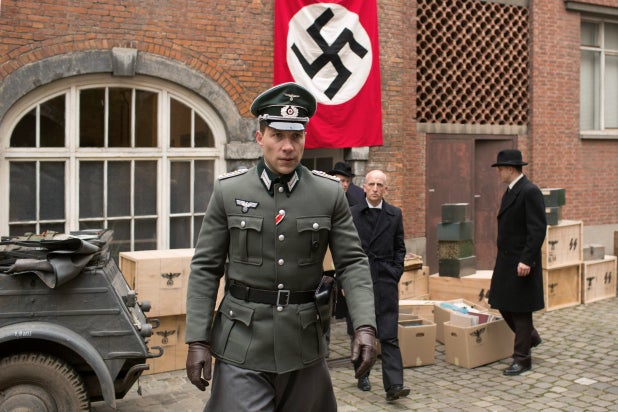 It’s a certainty that within any given calendar year, there will exist a small handful of films set during World War II whose plots involve resisting Nazis. Art house audiences seem especially fond of the sub-genre. Novelty tends to steer these stories. They’re filled with zookeeper’s wives, brave children who steal valuable books, and other souls whose courage stands as a beacon of hope amidst savagery.

“The Exception,” the latest of these, from Tony Award-nominated theater director David Leveaux (making his feature film debut), and written by Simon Burke (“Strike Back”), based off Alan Judd’s novel “The Kaiser’s Last Kiss,” is about a pair of exceptional exceptions indeed: the “good” Nazi and the Jewish housemaid who loves him.

If surface details were everything, this far-fetched (let’s also just call it insulting) scenario might be understandable, given that it features the extremely photogenic Jai Courtney (“Suicide Squad”) who meets the extremely photogenic Lily James (“Cinderella”), and instructs her to take off her clothes before knowing her name. (It’s Mieke, by the way, and stealth Judaism might not be her only secret; his name is Stefan and he’s a Nazi captain but feels sort of guilty about it.) She complies, and they have extremely photogenic sex.

Also Read: 'Cinderella's' Lily James to Cross the English Channel in 'Young Woman and the Sea'

Later, it happens again, only this time, in the name of equality, it’s James’s turn to make Courtney go full frontal. And when the leads are this attractive, it’s almost enough to make you believe that they could easily be the titular exceptions, really hot people thrown together as weirdly forbidden wartime romantic partners who then pair up for a crafty bit of subterfuge. Look, “Inglourious Basterds” was kind of implausible, too.

The rest of the story involves Captain Stefan being assigned safety detail for Kaiser Wilhelm II (a sly, amused Christopher Plummer, enjoying his often ridiculous dialogue) and his wife, Princess Hermine (Janet McTeer, making the most of her character’s desperate machinations to hold on to royal privilege). It’s 1940 and the former King is exiled in Holland, now under Nazi occupation, and there may be a British spy out to get him.

The morally conflicted Stefan is, furthermore, feeling increasingly unhappy about everything he’s chosen in life, including the time he was accomplice to the slaughter of an entire village of innocent Polish peasants: cut to a pile bodies so carefully arranged in a bloodless mass grave, and shrouded with hazy memory mist, that they appear decorative in the frame. He sheds one perfect tear over that one.

Mieke, meanwhile, is conducting clandestine meetings with a local minister, cleaning guns in her maid’s quarters, charming the Kaiser with her sweet ways, and deliberately compromising her real agenda by getting as naked as possible with a sexy Nazi. She’s busy.

Whatever nuance existed in the original novel, whatever detail regarding the complicated emotional existence of actual human beings, is reduced here to not-quite-suspenseful-enough plot points and an impossible forbidden romance that makes almost no sense. Leveaux’s competent direction makes sure every uniform button, table setting, and hairstyle looks just right, with no period detail out of place.

This is the kind of movie often referred to as “handsomely mounted,” for good reason, and these elements become the focus of a bored viewer. When the story is this awkwardly “off,” there’s always beautiful antique furniture to enjoy.

But it’s not that world yet, clearly, or “punching Nazis” wouldn’t be a trending social media topic in 2017. Go watch “Shoah.”