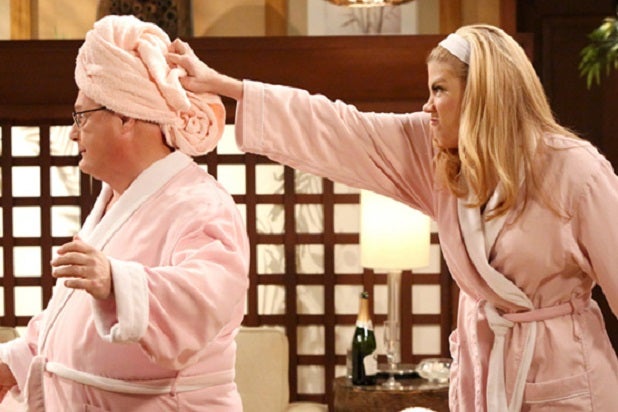 The TV Land sitcom “The Exes” returns for a fourth season Wednesday at 10:30 p.m., with divorce attorney Holly Franklin, played by Kristen Johnston, on a season-long search for a groom after discovering that she had neglected to cancel a long-forgotten wedding date.

TheWrap spoke to Johnston about what to expect from the new season, the time that the Internet convinced the world her costar Wayne Knight was dead and her ’90s hit “3rd Rock From the Sun.”

TheWrap: Holly Franklin, your character on “The Exes,” has quite the interesting storyline this season.
Kristen Johnston: Our whole season for Holly, she realizes early on that she never canceled the date for her wedding. She has this date that she totally forgot about, and it’s six months from now. And she goes to cancel it, and this woman walks into the room in her wedding dress, around Holly’s age, and she doesn’t want her fiance to see her before she walks down the aisle. And she’s walking on air. So Holly becomes obsessed. She has a date and a venue, and no man. So, for 12 episodes, that’s what she does — she tries to find a husband.

One of the strongest elements about “The Exes” is the chemistry between the cast members. Was that a natural thing from the start, or did the chemistry develop over time?
It just happened, it was magic. It really, really was. I’m old enough to know that it doesn’t happen all the time. And you can’t create it. I think by the third episode I was like, “My God; this is great.” It’s something where you’re either lucky or you’re not. You can always be good at something if you don’t have chemistry, but it just takes it to that other level.

TV Land has brought a lot of beloved actors and actresses back into the spotlight.
I think it’s actually kind of accidental. I know that sometimes there are snarky comments like, “It’s where TV stars go when they’re done” or whatever. But the bottom line is, that’s where sitcom stars go because there really isn’t anything anywhere else. So I think that that sort of accidentally is the way it happened. I don’t think their objective was to find somebody who really had a big show. I don’t think that was their objective, but I do think it turned out to be that way. There’s a lack of other outlets, and frankly, they pay as much as network [television], and they give as much love — much more, actually.

A lot of the reason that there are fewer venues for actors these days is that reality TV is dominating other outlets, but it seems lately that networks that were known for reality shows are shifting more toward scripted fare now. Do you regard that as a positive development?
Yeah, a lot of cable networks are really starting to develop shows. It’s fantastic. I love it; they’re all doing great stuff. It’s wonderful.

Your costar Wayne Knight was recently the victim of an internet death hoax. Did you guys give him a lot of ribbing about that?
No, we didn’t at all! Because I just think that’s not funny. I don’t think I even brought it up to him. That was weird, though; why do people do that? I just don’t get what the payback is. I mean, imagine if that was you or your kid! Oh my God; horrible!

You’ve been open about your past struggles with alcohol and have a charity, SLAM (Sobriety, Learning and Motivation). Is there more support in Hollywood for actors and actresses going through sobriety than in the past?
Yeah, absolutely! I think it’s getting better all the time, the more people are open about it. The less stigma there is, the less shame. I think the important thing for people to understand about addiction is that even though I’m an actress and I’m talking about it … two years ago, my book “Guts” came out, and since then I’ve traveled all over the country as a speaker. To different rehabs, to different benefits, to Congress, speaking on behalf of addicts in front of thousands of people. And not one of them is famous. Something that happens regarding addiction in Hollywood is that people tend to make it, “That’s . That’s . That’s not me.” As opposed to the fact that it’s everywhere, it’s not just a Hollywood issue. It’s, we’re the only ones you hear about.

Your former “3rd Rock From the Sun” costar Joseph Gordon-Levitt  has become quite the Renaissance man. Do you still keep in touch with him?
Yes, I do! We’re friends. He’s my dear friend Joey; he’s like my brother. Every four or five months, we’ll have dinner or something. I love him to death. When we were on “3rd Rock” together, we were the only ones really struggling with the overnight fame thing. It was weird; this 30-year-old woman and this 16-year-old would just be commiserating with each other, because we could understand it like no one else. And John [Lithgow] was thrilled and Jane [Curtin] is been-there, done-that, and French [Stewart] didn’t care. It was mostly Joey and I that were having, like, “Whoo — this is crazy!”