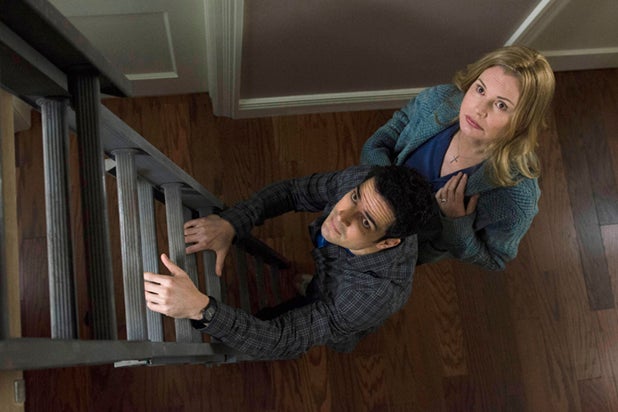 It’s been 43 years since “The Exorcist” first hit theaters, quickly becoming one of the most influential and parodied horror movies. Many have tried to replicate its creepy vibe and pea-soup-spewing terror, only to fall short of director William Friedkin‘s Oscar-winning original. Now adapted for television, Fox’s “The Exorcist” isn’t just battling that legacy but also the film’s many copycats. The series is appreciably unsettling, but thus far it won’t make your head spin.

Judged by its pilot, “The Exorcist” looks to ground its demonic-possession drama in somber realism and gotta-see-what-happens plot twists. Alfonso Herrera plays Father Tomas, a sensitive Chicago priest whose sermons advocate the importance of doubt and humility as ways to be closer to God — which is appropriate for a man suffering from a deep-seated concern that his own faith isn’t strong enough. As if on cue, a member of his congregation, Angela Rance (Geena Davis), tells him she believes a malevolent spirit has invaded her family’s home. Tomas is suspicious, but when he starts having eerie dreams in which he encounters a radical priest, Father Marcus (Ben Daniels), performing an exorcism in Mexico, he wonders if, at last, God has provided him with his calling.

Based on William Peter Blatty’s novel, the “Exorcist” film established a character dynamic that the new series, created by Jeremy Slater, follows. Once again, a goodhearted but tormented young priest teams up with an idiosyncratic older man of the cloth to confront a supernatural presence that’s wreaking havoc on an innocent suburban family.

As directed by “Rise of the Planet of the Apes” filmmaker Rupert Wyatt, the pilot establishes the show’s central figures and overall mood, and one episode in, it’s fair to say that atmosphere trumps character so far. Although the Fox series sometimes leans too heavily on jump-scare tricks to create dread, there’s a general unease that keeps things intriguing. But Tomas, Marcus, Angela and the rest of her family don’t get much room to make us care about the stakes — which is surprising considering that, by pilot’s end, it’s clear that something terribly wrong is going on in the Rance home.

That’s not to say that Slater doesn’t labor to give us some interesting interpersonal relationships within the Rance clan. Played by Davis with weary resilience, Angela struggles to keep her family together after her husband’s (Alan Ruck) mystery illness leaves him practically catatonic. Meanwhile, her eldest daughter Katherine (Brianne Howey) has sunk into depression since surviving a fatal car accident. With only her sunny younger daughter Casey (Hannah Kasulka) able to offer moral support, Angela fears she’s losing her mind, which makes her concerns about hearing strange sounds through the walls all the more upsetting.

Loaded with dream sequences, possessed foreign children, bellowed Biblical incantations and perpetually gloomy skies, this “Exorcist” wants to pay homage to its source material by taking seriously its questioning of God’s existence and its exploration of how loving families can be shattered by inexplicable trauma. Unfortunately, the pilot misjudges its tone, giving viewers a clenched-jaw solemnity that doesn’t leave much room for wit or surprise. Likewise, some of the performances — particularly Daniels as the rebellious, tortured older priest — feel so mannered that it’s difficult to imagine following the characters’ exploits from week to week as they try to deduce what demon is assaulting the Rances.

Also Read: Geena Davis: What I Learned From Launching a Film Festival

More than anything else, though, familiarity haunts the proceedings. From the “Exorcist” sequels to “The Exorcism of Emily Rose” to “The Devil Inside,” if you’ve seen one exorcism, apparently you’ve seen them all. This Fox series doesn’t seem to have much new to say about these particular paranormal activities — and that’s a problem that may bedevil the show.