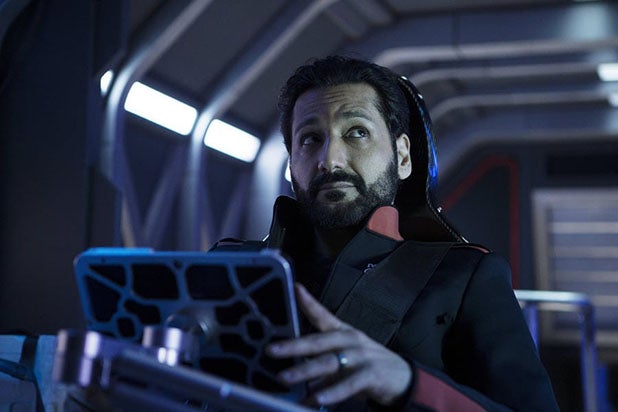 “The Expanse” star Cas Anvar is currently the subject of an independent investigation into allegations of sexual misconduct, TheWrap has confirmed.

Daniel Abraham and Ty Franck, authors of the series of novels upon which the show is based and producers on the show, revealed the existence of the investigation on Twitter on Friday.

“So one of the core cast of #TheExpanse has been accused of sexual misconduct,” Abraham wrote on Twitter. “We immediately passed these serious accusations onto the studio, Alcon. Alcon has engaged an independent firm to investigate this matter and takes these allegations very seriously.”

A further statement from the account under the duo’s pen name, James S.A. Corey, added, “Everyone is fully committed to the truth here. But they need a little time to do their work. Updates as I have them.”

“I welcome the independent investigation, respect that the women who have come forward should be heard, and will make myself fully available to participate in the process as appropriate so that I may refute these very serious claims that strike at the core of what I value,” Anvar said in a statement to TheWrap.

Also Read: 'The Expanse' Review: Syfy Series Tries to Be 'Game of Thrones' in Space

A spokesperson for Alcon Entertainment confirmed the existence of the investigation but declined to comment further. Reps for Amazon, the series’ home, did not immediately return TheWrap’s request for comment.

The accusations against Anvar first began to surface online earlier this week with a tweet from Twitter user @Lorie_o. “While we’re throwing out the garbage, toss Cas Anvar onto the pile for targeting female Assassin’s Creed fans,” she wrote. “I have two friends who told me he aggressively pushed them to meet up with him. One was creeped out and said no. The other he assaulted.”

Other users followed with similar allegations, including several with screenshots they said showed conversations with Anvar.

One Twitter user said Anvar “pressured me into coming to his hotel room at a convention when I was 17, fed me alcohol, tried to convince me to take my clothes off for a ‘massage’, groped me, told me he would give me money for a cab if I kissed him.”

Anvar has starred on the series as the Martian Navy pilot Alex Kamal since the series’ debut in 2015.

“The Expanse” most recently premiered its fourth season on Amazon Prime back in December. A fifth season has already been ordered by the streamer and went into production earlier this year. No premiere date has been announced.

Also Read: 'The Expanse' Renewed for Season 5 at Amazon

Several of Anvar’s co-stars have addressed the allegations, including Dominique Tipper, who issued a statement addressed to the show’s fans on Instagram. “I want you to know that I do not take this lightly. At. All,” she wrote, reiterating that the studio is taking the allegations seriously. “To the women that have spoken. I hear you.”

“The past few days have been a whirlwind but I want you to know that you are heard,” wrote Wes Chatham, who stars as Amos Burton on the sci-fi series. “I’m committed to advocate for those who have been mistreated at a place in time where all voices should be heard, and accusations should be treated seriously.”

Steven Strait, who plays James Holden, issued his own statement via Abraham and Franck. “I just wanted to reach out to let you know that we hear you … These very serious allegations are being treated with the utmost respect and gravity they deserve,” he said.