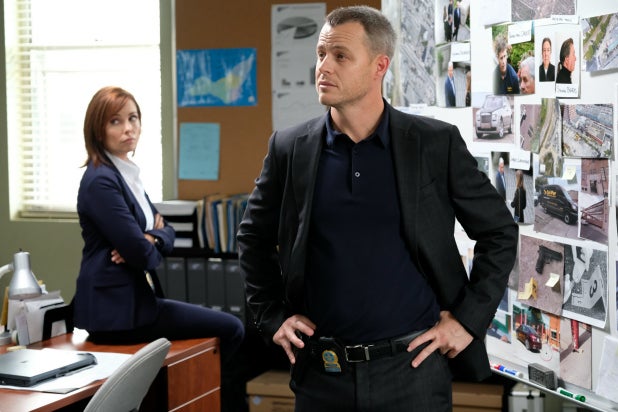 You could be forgiven for confusing the title of Canadian filmmaker Denys Arcand’s latest, the capitalist crime lark “The Fall of the American Empire,” with his 1986 battle-of-the-sexes talkathon, “The Decline of the American Empire.” Though they’re different stories, they’re cut from the same Arcand-ian cloth of sophisticated moral handwringing, with barbed lessons about society’s ills pouring from the mouths of cynical characters.

“Fall” has a broader entertainment canvas, however, with its commentary on avarice, inequality and charity sharing space with wry caper elements straight out of an Ealing Studios comedy. The mix is, for the most part, a welcome one, save one unappealing character, a retrograde love story, and an air that’s almost too blasé for its own good.

The set-up feels a little like something Woody Allen would have given his schlemiel persona in the early ’70s: Pierre-Paul (Alexandre Landry) is a mopey delivery service driver (with a Ph.D. in philosophy) in Montreal who believes he’s too intelligent to ever be financially successful; “The great writers were as dumb as mules,” he whines as he ends things with his dumbfounded girlfriend (Florence Longpré) in the opening scene. He’s a callous boyfriend, but a do-gooder, too, since we also see him give money to a homeless man with whom he’s clearly friendly.

This is all a precursor for our Wittgenstein-and-Socrates-referencing social critic of a protagonist to encounter a classic “What would you do if ” scenario when, on his route, he stumbles upon the bloody aftermath of an armed robbery. Confronted with a pair of dead bodies, a wounded gunman fleeing empty-handed, two duffel bags with millions in cash, and nobody watching, Pierre-Paul instinctively grabs the loot and stashes it in the courier van just before the cops arrive.

While energized by an instant windfall that could do a lot of good, Pierre-Paul also grasps that he’s not criminally savvy enough to just keep a bunch of tainted money lying around, especially with two detectives (Maxim Roy and Louise Morissette) increasingly suspicious of his innocent-bystander status. Looking to “invest” his jackpot, he finds help in middle-aged biker Sylvain (frequent Arcand go-to Rémy Girard), an ex-con who studied finance from prison — “I’m not a lawyer, I’m a criminal, I’m honest,” he assures Pierre-Paul — and a classy escort named Aspasie (Maripier Morin), whose particular charms Pierre-Paul initially falls for when he notices she quotes Racine on her website, but who develops an attraction to him in turn when she realizes he’s more than just a clingy john.

The romance between Pierre-Paul and Aspasie is Arcand’s stalest, least convincing element, a hooker-with-a-heart-of-gold cliché that Morin gamely tries to charm us with, but which isn’t assisted by Landry’s off-putting arrogance playing a bookish snob with Robin Hood designs. Besides, their fantasy coupling isn’t needed when the comic noir construct of laundering-with-intent is already fertile enough as a commentary on how the engine of society is too often dependent on flawed souls doing the right thing with questionable resources.

Arcand gets more tartly enjoyable mileage out of the story’s machinations when he brings in the almost menacingly refined, elegantly attired Pierre Curzi as a top-drawer financial magnate with the solution for the trio’s money-washing needs. Compared to Arcand’s attempts at cross-cutting peril — the detectives closing in, the gang who sponsored the robbery conducting their own violent search for the money — Curzi’s contributions to the sense of scheming fun as a figure of urbane disreputableness are much greater.

Arcand has never been the most visual or rhythmic of directors: Cinematographer Van Royko’s Montreal feels neither especially noir-laden nor comedy-glossy and at over two hours, the whole thing’s too long. Arcand prefers to keep us interested with the droll moral dubiousness on display, and the world-weary observations that color the proceedings, and generally that approach turns a pointed profit in making his points. But at the same time, he’s clearly stymied by how to treat a subplot involving the surviving robber, a poor black kid named Jacmel (Patrick Émmanuel Abellard), whose torture at the hands of the white mob he works for — they believe he has the cash — feels like an awkward political statement on race, poverty, and who gets punished, that belongs in another issue-conscious movie entirely.

Ditto the curious choice of ending “The Fall of the American Empire” with a succession of homeless people staring into the camera, a left turn from mindful light entertainment into public service announcement shaming that hobbles a message Arcand had until that point treated with serviceably prickly flair.