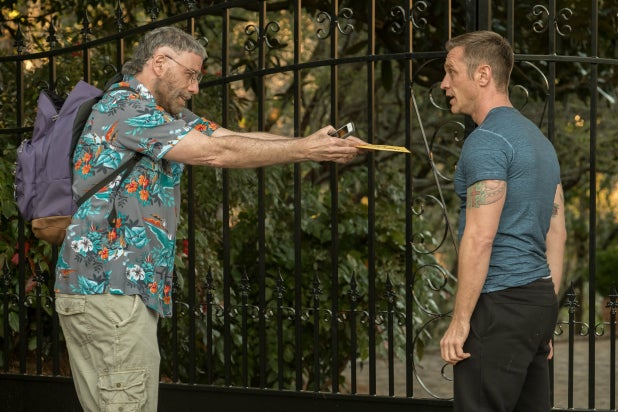 Write what you know, they say. But because Fred Durst once had a bad experience with a stalker, we now get the rank human patty that is the Limp Bizkit frontman and sometime director’s latest indulgence “The Fanatic,” a celebrity-terrorizing scenario that wants to be “Misery” but only creates misery.

Durst didn’t necessarily embarrass himself 10 years ago when he released his directorial debut, the admirably sensitive college drama “The Education of Charlie Banks”; he didn’t write the film, nor did his effort suggest hidden reserves of cinematic promise. “The Fanatic,” however, which Durst did have a hand in writing, is a brainless, exploitative folly which gives John Travolta free rein to mine the history of cringe-worthy autism portrayals for an offensively garish Frankenstein pantomime of unhinged obsession. It ultimately suggests this side-career of Durst’s should be well and truly snuffed out.

Travolta plays a childlike ultra-fan called The Moose, a Hollywood Boulevard denizen in bowl cut, loud shirts, khaki shorts and lumbering gait who rides a moped and haunts a movie collectible shop where he learns one day that his favorite creature-killing action-horror star, Hunter Dunbar (Devon Sawa), will sit for an autograph signing that night. (Because, you know, A-listers do that kind of impromptu meet-the-public penance all the time.)

The excitement is almost too much for him: Small-talk practice in front of a mirror, buying more Dunbar memorabilia he can’t afford and even crashing a movie party only to find the rumored-to-be-there Dunbar is a no-show, which sends him ranting about the missed opportunity to his young tabloid photographer pal Leah (Ana Golja, “Degrassi: Next Class”). She tries to calm him down, to which he blurts out — as if to stress the second syllable in “fanboy” — “You’re not my mom!”

The Moose, whose only job appears to be terribly playing a London bobby for Hollywood tourists (a bad performance within a bad performance, mind you), is especially incensed that a fellow street entertainer is a scam artist who mocks him and the Walk of Fame’s costumed regulars. “You don’t respect the Boulevard! You don’t respect the fans!” the Moose yells. You know, like this movie does!

At the signing, though, Dunbar bolts from the table to deal with a personal issue right before his biggest follower can have the greatest moment of his life. Moose’s ill-advised (and way too easily accessed) attempt to confront Dunbar in the alley afterward — in the presence of the star’s ex-wife (Jessica Uberuaga) and son — triggers an unkind and understandably threatening response from the aggrieved actor. But then Moose discovers where Dunbar lives thanks to a star-maps app — why wouldn’t an uber-fan and Hollywood fixture have known about such resources before? — which leads to a couple of break-ins in the effort to rectify, in Moose’s star-screwy eyes, this illusory relationship. Needless to say, it only leads to worse acting and writing, careless plotting, and the expected bloody violence.

Given the genuinely engrossing power struggle currently being waged between rabid, toxic fandom and a brand-protective entertainment industry, it’s near-criminal that Durst is shallow enough to see his update of “The Fan” (both versions) and “Misery” merely as one more comic-horror playground for a misguided star prone to scenery-chewing. There are meager attempts to complicate the hostage dynamic by occasionally contrasting Dunbar’s macho anger (given the full-throttle treatment by Sawa) to the Moose’s naiveté gone wrong.

But with no explanation for what the Moose’s condition is — and boy, is what Travolta doing a choice — Durst and his main star have, rather than giving us a character, merely offered up a hapless, carnival figure of laughable madness, alternately impossible and improbable. And no amount of John Swihart’s shrieky strings score, or Conrad W. Hall’s superficially moody cinematography, can help. How Durst and first-time screenwriter Dave Bekerman resolve the second-half housebound scenario is even more head-scratching, a thuddingly inane mix of guilt, gore and irony that’s supposed to feel like a cosmic twist instead of the logic sprain that it is.

Twenty-five years ago, Travolta got a needed career jolt from the ultimate fanboy-turned-filmmaker. This year, with the duds piling up once more, he’s play-acting mental illness for Fred Durst in “The Fanatic” while Quentin Tarantino offers up orgiastic sequences of what driving Hollywood’s streets must feel like when you’re Brad Pitt. For the love of movies, does anyone out there have one more save for Travolta?