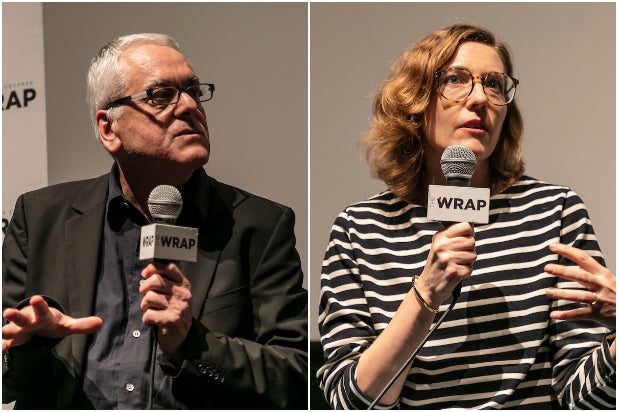 There are no people being turned into lobsters in Yorgos Lanthimos’s latest film “The Favourite.” And there are no teenage boys with sinister, manipulative powers and a disturbing way of eating spaghetti either. Boasting 10 Oscar nominations, including Best Picture and Best Director, you might assume that “The Favourite” is Lanthimos’s most accessible film to date.

But between the fish eye lenses, the wild duck races and the dance party with contemporary moves, there’s no question that “The Favourite” is a Yorgos Lanthimos film. And giving “The Favourite” its look and personality came down to the work of the below-the-line talent that had to transform this conventional screenplay into something intrinsically “Lanthimos.”

“It had to follow some Lanthimos way of communicating,” the film’s editor Yorgos Mavropsaridis told TheWrap’s Steve Pond. “The script was more linear, or more mainstream, as you say. But it has to have its own language, and also to indicate an interpretation of what Lanthimos thinks about these things.”

Also Read: 'The Favourite' Director on Finding 'Synchronicity' in a Period Drama About a Mad Ruler

He and production designer Fiona Crombie are both first-time Oscar nominees for their work on “The Favourite,” and they joined TheWrap’s Awards Screening Series Thursday night at the Landmark Theatres in Los Angeles to discuss how they walked the line between being mainstream and still very strange.

For one, Crombie explained that Lanthimos intentionally took many historical liberties to suit the story. There are no wheelchairs in the early 18th century when the film is set, nor are there birthday cakes with bright blue frosting that Queen Anne would have vomited into a vase, as she does in the film. In fact, the story is about Queen Anne and the other real life people of her court, but even she can’t be sure when the film is really set.

“I remember we gave it a date. It’s 1705, and Yorgos said, ‘What makes you think it’s then,” Crombie said. “It’s our interpretation of the period. It’s very invented. But we also wanted it to feel like a time in history that an audience could relate to and understand. But I did research, and I do know what should be there and what shouldn’t have. But we didn’t worry about it.”

Mavropsaridis toyed with the film’s structure too, drastically changing what was on the page in the original screenplay to give “The Favourite” the appropriately sardonic and strange touch that Lanthimos brings to all his films. For instance, the early sequence in the film of Emma Stone’s character Abigail arriving at Queen Anne’s castle was originally meant to lead off the film, and it was written and first cut in a linear fashion. but in the completed film, we see her enter into the castle muddy and filthy, and only later do we see how she was pushed into it. Mavropsaridis said the scene’s meaning and energy came from the editing and not from the page alone.

All of this was done as a way of making sure the editing served Olivia Colman, Rachel Weisz and Stone equally. And seeing as all three have been nominated for Oscars, including some debates as to whether all three should be considered lead actresses rather than supporting, Mavropsaridis was certainly up to the challenge.

“It’s about three women, love and what it means to them,” he said. “That was another difficult thing in this film, to make all three women equal in power, there was a lot of editing to that to take out the obvious.”

Mavropsaridis said that Lanthimos is demanding as a director, but his one real demand is that everyone has to be creative. The film was shot at England’s Hatfield House, and Crombie said that it’s often tough to tell when you’re watching the film where the house ends and where her work begins.

Crombie and her crew emptied out entire rooms, built massive sets within them and adhered to rules about the use of candles to preserve the castle’s tapestries and walls. At one point she even created a spa set within the confines of an old kitchen. And in meeting the film’s opulence and extravagance, there was never a limit to what Lanthimos was willing to do.

“Yorgos was incredibly trusting, and he just allowed me to do my thing. He moved one chair. He just allowed me to do it,” Crombie said. “Probably the primary anxiety I had about the film was how to make sure that everything felt like a jewel, that you’re in the inner sanctum of the Queen’s world, and every single thing, no matter how big or small, had to be the most expensive version of it.”

Mavropsaridis said “The Favourite” is inspired by the work of Jean-Luc Godard, Robert Bresson, Stanley Kubrick and many more, but it’s the bond he’s formed with his entire crew that makes the story his own.

“He doesn’t have some fixed idea about how things will be,” Mavropsaridis said. “It’s the same language, but the difficulty is that we have to discover it again with this film. It’s a process, but in a frame of mind that we both know.”