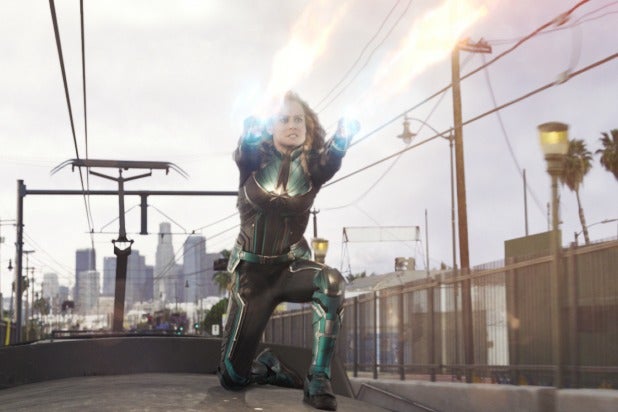 Hold on to your plumey helmets: Disney held the first public screenings for “Captain Marvel” Tuesday night, and just minutes after it ended, the joyous online reactions began.

Much praise was given to star Brie Larson and the film’s portrayal of Carol Danvers, the first female hero to lead a Marvel Studios film. But co-star Ben Mendelsohn was celebrated as the film’s “surprise MVP.” Also, pretty everyone agreed that a cat named Goose is wonderful.

“#CaptainMarvel doesn’t owe us anything, but holy wow does it deliver,” said ET Now’s Meredith B. Kile.

And TheWrap’s Umberto Gonzalez was over the moon: “Here is my reaction: CAPTAIN MARVEL ABSOLUTELY SOARS!”

There was a little criticism too. Gregory Ellwood of The Playlist complained that it’s “slow and uninspired” in the first half, though he says it is “much better” in the second. And MovieFone editor Drew Taylor, who otherwise loved the film, also said it’s “a bit wobbly at times.”

But for the most part, people who saw it freaked out. Perhaps most interesting was what Angie Han of Mashable said: “Well, Thanos is f—ed.”

We have a pretty good idea why that might be the case: read how we think Captain Marvel is going to connect to the events of “Infinity War” here. And meantime, we have a lot of questions we can’t wait to get answered.

#CaptainMarvel doesn't owe us anything, but holy wow does it deliver. pic.twitter.com/q8KuEnla2U

#CaptainMarvel is (takes deep 90s breath) TOTALLY AWESOME. Never related to a Marvel character quite like Carol. She’s the stubborn witty 90s kid I like to think I am. pic.twitter.com/H6Q9s90KHA

1. Cat people will love this movie.
2. Several truly magnificent music moments for this 90s kid.
3. Carol's hero moment was very cathartic/true to the female experience, imho.
4. The MCU feels more complete now that Carol is in it. ♥️

#captainmarvel had space battles, car chases, an amazing 90s soundtrack and an ADORABLE ????! A surprisingly fun script, laughed so much!!! Great to finally see this kick-butt heroine in action ???? pic.twitter.com/Res8K8wMA7

#CaptainMarvel⁠ ⁠ is very fun. And I am thrilled to announce Brie Larson wears my EXACT SAME NINE INCH NAILS tee for more than half the film. Seriously. I’ve never seen anyone else with this shirt.

The future of the MCU gets even brighter adding #CaptainMarvel to the mix. Really fell for @brielarson’s sass, strength & energy in the role. Same with @LashanaLynch too! Ben Mendelsohn is A+ casting as Talos. And yes, Goose is a scene stealer. 2nd viewing can’t come soon enough.

YASSSS wow, do dudes feel this good after action movies all the time?! #CaptainMarvel #reaction pic.twitter.com/yhWWDaPc8H

Marvel does a prequel right, not overexplaining too much but giving us unexpected answers in interesting ways. MCU’s most multilayered villain story. A fun 90s soundtrack, but sometimes the song choices feel too obvious.

And not wacky weird like the GOTG movies. Think more “Rey snapping into endless mirrors” from The Last Jedi type scenes. Also, finally, the MCU and a Nirvana song come together (as Kurt Cobain wanted)

Captain Marvel is everything that I hoped it would be. It feels completely unlike any other Marvel film. A unique and fresh take on an origin story that feels new. Brie Larson is fantastic as Carol Danvers. This is one of my favorite Marvel movies of all time. #CaptainMarvel pic.twitter.com/0ou7HU93MY

Fans of #CaptainMarvel comics are going to love the movie. Plain and simple.

Really loved #CaptainMarvel. It’s a little wobbly at times but only because it’s so ambitious. It’s beautifully constructed, hilarious and offers tons of surprises. @brielarson obviously rules but Ben Mendelsohn is the surprise MVP. pic.twitter.com/yQLQGl2Yt0

Captain Marvel is a blast! Has some cool surprises that I definitely didn't see coming, and the mystery/origin it weaves is engaging and fun. Brie Larson is awesome, and makes a fantastic first step into the MCU #CaptainMarvel pic.twitter.com/oqrRtgDQrp

#CaptainMarvel was a lot of fun! Just enough ‘90s nostalgia without overdoing it. Brie Larson is great. Ditto Sam Jackson & Ben Mendelsohn. Goose the cat is purr-fect. Some nice surprises and clever decisions throughout. Cool sci-fi elements. And funny! Thumbs up! pic.twitter.com/PzzxXir8pZ

#CaptainMarvel is a welcome addition to the #MCU. The movie is really well done with some great moments. #benmendelsohn steals almost every scene he's in. @brielarson literally shines in the role. So ready for #AvengersEndGame pic.twitter.com/GET0socRjl