Though adolescents are the most desired demographic in the film business today, it’s not often that movies imaginatively, intelligently dive into what it’s like to be one. Anna Rose Holmer’s remarkable debut feature “The Fits” is gloriously that, a humming, meditative exploration of one 11-year-old girl’s desire to join a rigorous drill team, and the social dynamics that color her journey. A confident blend of performance, kineticism, and tone, it has a pulse all its own, born of passion and curiosity, and a healthy dose of psychological mystery to boot.

We first see braided tomboy Toni doing sit-ups in the Cincinnati rec center boxing gym where she trains alongside her older brother (Da’Sean Minor). Played by a mesmerizing young find with the authoritative name Royalty Hightower, Toni is a committed jock but still drawn to the award-winning dance team that practices in the auditorium. Called The Lionesses, they’re a uniformed squad of older teens with slammin’ moves and a commanding vibe: while the boys punch bags in the gym or spar in the ring, these girls punch the air in beautiful, forceful sync, and face off in stand-battles.

Encouraged by her supportive brother to try out, she joins the “crabs” — the term for new girls — and hesitantly makes some new friends, Beezy (Alexis Neblett) and Maia (Lauren Gibson). Soon Toni’s life is taken up by learning a furious clapback routine, getting pierced ears and temporary tattoos, and managing the emotional ups and downs of a new social world. 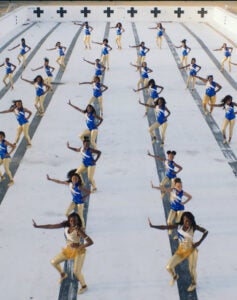 But on the fringes is an eerie phenomenon: After the Lionesses captain experiences a debilitating seizure, other girls start experiencing sudden uncontrollable breakdowns as well that look like shaking, moaning possessions. The strange spasms, blamed on everything from unsafe water to what one girl snickeringly calls “a boyfriend disease,” rock this insular community, but also begin to serve as a bizarre rite of passage amongst the team members, some of whom openly wish for “the fits.”

Though it deals with complicated emotions surrounding acceptance and individuality, Holmer’s movie, which she wrote with Saela Davis and Lisa Kjerulff, is a model of control, not unlike its strong, watchful central character. Toni’s no wandering naif in a fairy tale: She’s an eager recruit, which means “The Fits” has more in h boot camp dramas than most coming-of-age flicks. But it’s a cinematic poetry that’s both muscular and graceful, full of baby steps and dance steps and the suspense of figuring out who you are.

Also Read: How Hollywood Studios and Networks Could End Up in Court Over Female Director Discrimination

Hightower embodies all of this, too, with a physical, nuanced turn that feels both beyond her years and yet somehow just exactly her age. She’s already jabbing above her weight, and it’s a treat to watch. (She and much of the wonderful female cast were pulled from an obviously talented Cincinnati outfit called the Q-Kidz Dance Team.)

“The Fits” — which credits a movement consultant as well as a pair of choreographers — is a small symphony of bodies in motion, and Holmer’s way of capturing it is gratefully not that of music videos, which are usually designed to induce ogling, or even musicals, which dazzle by making the well-rehearsed look easy. She’s working her own vocabulary of physicality, showing dynamic interest in the psychology behind the ways and reasons her characters move, or don’t.

In one gripping shot, Holmer curls around Toni as she practices a routine with the other Lionesses — her vigor speaks volumes, but so does her being a fraction of a step behind every other girl. Shots are often built around movement: a swarm of excited Lionesses filing past Toni as she rolls a 5-gallon water bottle in the opposite direction; the way the girls circle one of their own having an attack (with Holmer’s camera zeroing in to show how it looks on a recording smartphone); a Lioness hopeful standing still in an empty swimming pool, asking the universe for the convulsions will make her part of a rarefied group.

With nearly all of the movie taking place at the rec center — its hallways, locker room, echoey auditorium and gym — it becomes a sacred space of sorts, and Holmer is wise to make it an extension of Toni’s consciousness. To that end, the sound design is marvelous, layering in disorienting squeals of wind instruments to indicate a pitch being sought, but not always necessarily found, or the roar of an appreciative crowd that we realize is only in Toni’s head. For a movie that teeters between the naturalistic and the psychologically subjective, these details are important, and Holmer is vigilant in staying attuned to Toni’s state of mind. Paul Yee’s vivid widescreen cinematography allows for out-of-focus backgrounds and master-shot framing that highlight Toni’s loneliness and introspection.

On top of all that, it doesn’t wear out its welcome either, gliding in and out of its young protagonist’s life in a compact 72 minutes, not unlike a brief, exhilarating performance. You could go a whole year watching indies, many much longer, and not come across a jewel as intricate and lustrous as “The Fits.”