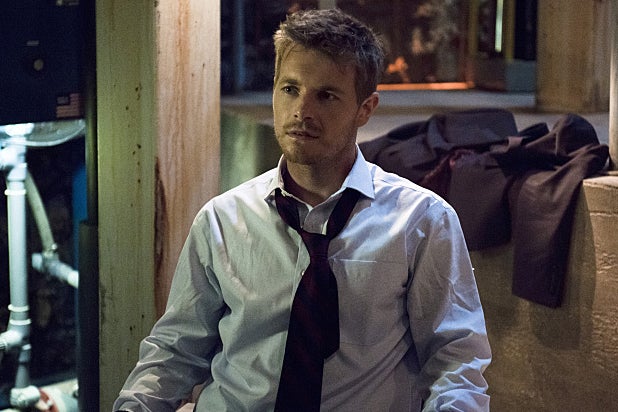 “The Flash’s” resident Golden Boy, Eddie Thawne, has come a long way from being the good looking, nice-guy boyfriend of Iris West, who also happens to be the object of Barry Allen’s affections.

As The CW superhero drama gears up for its first season finale, Eddie (Rick Cosnett) is becoming more central to the plot, especially since we now finally know what his connection is to Harrison Wells (Tom Cavanagh), aka Reverse-Flash, aka a time-traveling Eobard Thawne.

“It’s been great to finally get to go in a bit of a different direction,” Cosnett told TheWrap of the latest developments in his character’s story arc. “Some messed up things have already happened to Eddie but now things are starting to happen to him that are irreversible and will really change the course of his life.”

Below, Cosnett dishes on what’s to come for Eddie, his ongoing relationships with Wells, Barry (Grant Gustin) and Iris (Candice Patton) and whether Eddie will turn down a darker path than the one he’s been on so far. Although he was careful not to give away too much.

Eddie has always been sort of mysterious and now we’re finally seeing how he plays into everything that’s going on. How has that been for you?
It’s been great to finally get to go in a bit of a different direction. Some messed up things have already happened to Eddie but now things are starting to happen to him that are irreversible and will really change the course of his life. That’s been really, really fun to play.

How central is Eddie going to be to the story going forward?
He’s very central, especially in the last couple of episodes. It’s going to be a big surprise and it’s really going to be quite epic. I got to play a big part.

How is Eddie going to react to everything that Wells is telling him? Is he going to try to fight his destiny?
I think we get to see that the two of them are related and Eddie also has a backbone. The way they kind of bicker I find quite hilarious myself. Obviously, I’m quite a commodity to Wells (Eobard) and it’s kind of cool to see kind of how everything for the last twenty episodes or so have been interwoven, seemingly very mysterious, but it all becomes very clear by the end, as to where everything is going.

So will Eddie have his own opinions on everything that’s going down or is he going to just be used as a pawn by Wells?
Now that he has this information, he has the power to do with it what he will. It’s good because Eddie now has to decide what he wants to do with the fact that one of his best friends is going to marry his girlfriend. It really cuts him to the core and he can either go with that in a positive direction or negative direction. It’s that whole good vs evil thing and he’s really at a crossroads at this point.

Have you seen some of the fan theories out there – like, is Eddie going to turn into Cobalt Blue or Booster Gold?
I read a lot of that stuff, I did a lot of research so when people on Twitter are like “Oh, I know he’s going to turn into this…” It’s all pretty awesome. Cobalt Blue seems like a really cool direction to take. People still think I’m still Reverse Flash! The whole idea of time travel is a real arsenal on the show, so we might see that play into everything as well. So yeah, they’ve been very clever – Andrew [Kreisberg] and Geoff [Johns] and Greg [Berlanti] – in keeping the audience on their toes and let’s just say the season finale, they’re going to be shocked.

So what are the chances that Eddie will end up with superpowers and will we find out this season?
I’d say fifty-fifty. That’s vague enough [laughs]. You’re just going to have to wait and see.

Eddie has hated keeping secrets. Now that he has all this new information, is he going to have to start keeping some secrets of his own?
Yeah, Eddie hates keeping secrets… But I think after this whole experience with Eobard Thawne down there, he’s found out all this crazy new information… Let’s just say the rest of the gang are going to find Eddie and things have completely changed for him. He’s a really different person from this whole experience.

How is the Iris/Eddie/Barry triangle going to unfold now that Eddie knows Iris ends up with Barry?
It’s sort of wonderful that everything’s very quickly starting to unravel. Of course Iris always had a thing for The Flash and she also had feelings for Barry that she was denying and now those two things have come together into one person. So there’s even more of a tension, even more of a triangle – now it’s like a love square has come into a love triangle. It’s just another score in Barry’s department but at the same time, we’ve really put in a very good case for Eddie. Eddie’s the man, Barry’s the boy. We have to see why she keeps coming back to Eddie. You just don’t see my loving looks, you only see Barry’s. It’s really not fair! [laughs]

What can fans expect in the season finale?
Everyone’s not going to see what’s coming. There’s been lots of speculation but I don’t think I’ve seen one person guess correctly. So you’re just going to have to be there to see how it all goes down.