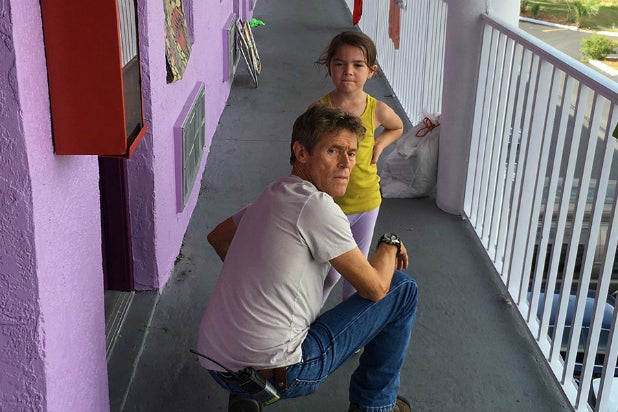 Orlando is such a magical place that shops are shaped like the items they sell: giant shells, fiberglass oranges, big swirly ice-cream cones. Picture-perfect communities have names like Celebration. Even seedy roadside motels are painted in the brightly garish colors of little girls’ bedrooms.

But Sean Baker’s beautiful heartbreaker, “The Florida Project,” scratches just below the cheery lilac and bubblegum pink to expose the layers of privation festering in this sunshiny state.

Our tour guide is six-year-old Moonee (extraordinary newcomer Brooklynn Prince), an angel-faced rebel who’s already smart enough to trade on her own adorability. Moonee is the mini-ringleader of the Magic Castle, a crumbling motel where rooms go for $35 a night. That might sound cheap, but it adds up: most of those rooms are filled with families who live there full-time, because they have nowhere else to go.

So where does a thousand bucks a month for rent — plus money for everything else — come from? This turns out to be the never-ending question for Moonee’s mom, Halley (Bria Vinaite, in a strong debut). Halley, who seems to be in her early twenties, is really still a kid too. She’s constantly getting into trouble, with a teen’s blithe assurance that she can charm her way out.

She’s right, to a point. She’s certainly got the motel’s softhearted manager, Bobby (Willem Dafoe), working overtime to keep her safe. But there’s no denying her adult responsibilities. Chief among them, of course, is the little girl who regularly leads other tiny children (Valeria Cotto, Christopher Rivera) across busy highways and into abandoned crack houses, in search of new adventure.

Overlooked Americans also formed the heart and soul of Baker’s acclaimed breakout indie, 2015’s “Tangerine,” along with earlier, award-winning films like “Starlet” and “Prince of Broadway.” He got a lot of attention for the look of “Tangerine” (he shot it on iPhones, to striking effect) so the meticulously polished imagery here comes as some surprise. It’s just as effective, though: his emphasis is on dissonant contrasts, and there are plenty to be found just down the road from the Happiest Place on Earth.

There is certainly nothing Disney-fied about Halley’s life. She and her daughter live in a single room with so little space, Moonee has to stay in the bathtub while Halley uses the bed for the kind of work that pays her the cash she needs.

On the other hand, Moonee’s happiness is Halley’s clear priority: she adores her daughter, and is endlessly (and somewhat unrealistically) patient and supportive. True, she encourages cursing and disobedience, and she leaves the girl unsupervised all day long. But Halley also gives Moonee every child’s fantasy: no rules, no restrictions, no objections. Just a great wide world in which to wander endlessly.

Placing cute kids in precarious situations is an easy setup, but Baker successfully elevates the stakes. For one thing, the movie’s visual beauty gradually bears down on us in its suffocating disparity. The brighter the sunlight, the more we notice the bedbugs on the wall, the residents’ dark fear of outsiders, and the shadowy rooms with their ever-flickering TV screens.

Moreover, Baker has found the ideal cast to represent his neorealist approach. Dafoe is wonderfully understated, an empathetic stand-in for every viewer who’s both troubled and touched by Halley’s struggles. As for Vinaite, consider this your chance to claim discovery rights: it’s likely we’ll be seeing much more of her soon. She manages to make Halley’s situation so understandable that many of her objectively terrible choices feel both inevitable and almost heroic. The proof, and Halley’s redemption, lies in the unshakable trust she’s earned from her otherwise defiant daughter.

It’s Prince, though, who lifts the movie into another realm. It’s no exaggeration to say that hers is one of the most noteworthy child performances in recent — or, for that matter, distant — memory. She is so charismatic, and so unfailingly natural, that every one of her scenes feels organic. Once she and Baker finally reveal the core of this wonderfully complex little girl, it’s impossible to think of anything other than Moonee’s own Tomorrowland.