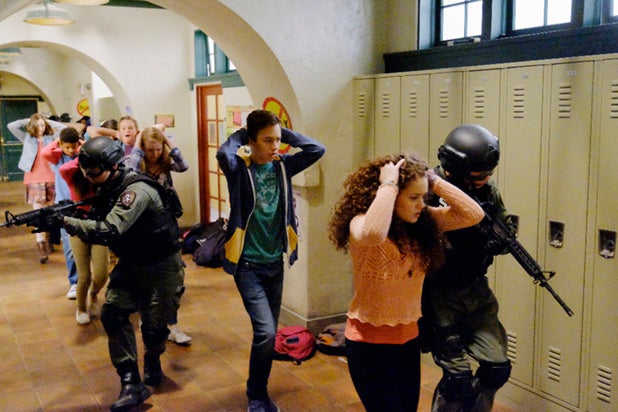 THE FOSTERS - "Potential Energy" - Tensions run high as Stef and Lena are called to action when the school is put on lockdown after it's discovered that Mariana's boyfriend Nick brought a gun on campus, on the fourth season premiere of "The Fosters," airing MONDAY, JUNE 20 (8:00 - 9:00 p.m. EDT), on Freeform. (Freeform/Tony Rivetti)

“The Fosters” ended last season with Nick pulling up to school with a gun in his glove compartment, a powerful cliffhanger with a payoff that’s even more dramatic in light of recent events.

Season 4 of the Freeform drama picks up right where last season left off, with suburban San Diego charter school Anchor Beach forced to go into lockdown when word of Nick and the gun gets out. The premiere comes just over a week after 50 people were killed in a shooting at a nightclub in Orlando, Florida, and even co-creator Bradley Bredeweg said it was difficult to watch the episode so soon after such a tragedy.

Bredeweg told TheWrap that there was a brief conversation with the network about whether or not to reschedule the episode, but the ultimate decision was to air it as-is, hopefully sparking further conversations about how to prevent these kinds of gun-related scares and tragedies — even those beyond Orlando — from happening in the future.

“When you take a step back and take a look at American culture, you suddenly realize that these things are happening all the time,” Bredeweg said. “So really when is a good time? I think anytime is a good time to start talking about this kind of thing and subject matter.”

Read more of TheWrap’s interview with Bredeweg below:

TheWrap: The episode comes so soon after the shooting in Orlando, did you ever have doubts about the timing? Did you ever consider rescheduling it?
Bredeweg: Orlando is one of the most tragic things that has ever happened to us as a country, and the gay community especially. But when you take a step back and take a look at American culture, you suddenly realize that these things are happening all the time. Maybe not on as large a scale as Orlando, but we face these kinds of tragedies constantly. So really when is a good time? I think anytime is a good time to start talking about this kind of thing and subject matter. Because we have to figure this out. We have to change our ways and our laws.

What do you hope your viewers take away from the episode?
I think when we have tragedies like Orlando, we all rise to the occasion for several days. We tweet and we hashtag and we pray and we throw as love toward the families affected by the tragedies. But then, for some reason it just dissipates, and we just fall back into our normal way of life. And we for some reason accept this as the norm in our country. So whatever we can do to push the conversation forward and get people thinking above and beyond, all the better.

In the premiere, we also saw a bit of the aftermath of last season’s other cliffhanger, where Callie comes clean to her moms. What drove her to finally own up to everything that’s happened between her and Brandon?
She finally just reached a point where she had no other choice. She couldn’t hold it back anymore because everything was stacked against her at that point. She’s sitting in that office with both of her moms in front of her, and she just had to tell the truth. She couldn’t hold on to it anymore. And I think we’ve all been there at certain points in our lives. And so finally Callie was at that point: No more lies. No more hiding. No more pretending that this doesn’t exist.

Obviously it’s going to be a very complicated situation for some time. How do the moms deal with this now that Callie is their daughter and Jude is their son? For the entire season to come, it is a big complication for the family.

“The Fosters” premieres Monday, June 20 at 8/7c on Freeform.