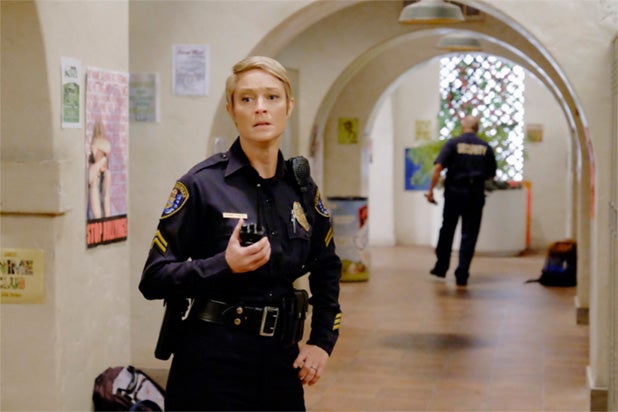 “The Fosters” opened Season 4 on Freeform with a powerful gun-scare episode that ends without much resolution. Nick is still unaccounted for at the end of the hour, armed with a gun stolen from his father. Though Mariana and her family make it home safe at the end of the episode, his threat looms large.

As unsettling as the episode’s conclusion may be, series co-creator Bradley Bredeweg told TheWrap that the storyline will be resolved in next week’s episode, what he calls the second half of a two-part premiere.

“The second episode very much is about where Nick is,” Bredeweg said.

Also Read: Evolution of Freeform: From '700 Club' to 'Shadowhunters' (Photos)

But the events of the first two episodes will resonate throughout the season — especially with Mariana, who Bredeweg said will feel some sense of responsibility for all that happens. “She has some PTSD around all of this,” he said. “And we’re going to explore all of that in the episodes to come.”

Read the rest of Bredeweg’s interview with TheWrap below.

TheWrap: Nick is still missing at the end of the episode, how long will that continue?
Bradley Bredeweg: We always looked at [the premiere] as a two-parter. In fact, Rob Morrow directed both episodes, so it almost felt like we were shooting a two-part film. The second episode very much is about where Nick is, and we will deal with that by the end of the second episode.

We don’t spend much time with Nick in the episode. What’s going through his head throughout all of this?
Obviously, we know that Nick is very unstable. There are some mental issues there, he comes from a very broken past. We explored a little bit of that with his father last season. But we really wanted to explore what it’s like to be inside of the situation. Oftentimes when there are stories about shooters out in the world, we focus on the person behind the gun first and foremost, and the people affected by it almost become a B or C storyline. We wanted to be inside the terror from every else’s point of view.

How did you come to the decision to include the substitute teacher with the gun in the episode?
There are all these conversations suggesting that if the victims had a gun, the situation would be better. Or if someone else on the scene had a gun, they would be able to take down the shooter and all would be well. It’s a very complicated conversation and we just wanted to add that layer into our storyline to say, “Look, that’s not always going to be the answer. In fact, most times, probably not.” So it’s a small part of this episode, but it was an important one for us to at least put out into the world and start a conversation about.

Also Read: 'Guilt' Co-Creator Explains Why Natalie Shouldn't Be So Quick to Trust Her Sister

One of the most powerful parts of the episode is the reaction of the all the parents, including Stef and Lena. What made you include that?
Well, they both have jobs to do. Lena is vice principal, and Stef is the first officer on the scene. How do you deal with this situation as a police officer, as a vice principal? And then on top of all of that you also have your children to worry about. And like you said, it was also important to us to explore the faces of the other parents on the scene. All they want is answers. All they want to know is where their babies are. And that helplessness that you feel in situations like this is unimaginable. So that was an important part of the episode for us as well.

How will all of this affect Mariana going forward?
That’s something we really explore in Episode 2 and beyond. In a way, she might feel a little responsible for this. Because she knows Nick saw her and Mat kissing, she knows Nick is a very complicated boy. She has some PTSD around all of this, and we’re going to explore all of that in the episodes to come.

“The Fosters” airs Mondays at 8/7c on Freeform.

Evolution of Freeform: From '700 Club' to 'Shadowhunters' (Photos)

Launched as Christian Broadcasting Network in 1977, the network has completely transformed itself several times throughout the years

Since its inception in the '70s, the network now known as Freeform has been bought and sold several times, and been re-named even more. With the exception of "The 700 Club," the network today bears little resemblance to its earliest days.